Hammer Attack Brings the Unexpected to the Operating Room

When you’re the neurosurgeon on night call at a large urban hospital – especially one with a Level 1 Trauma Center – you know that anything can happen. When it’s my turn I can expect a few phone calls from the neurosurgery resident and physician assistants working the night shift, mostly to consult on a care plan for someone who’s been in a car accident, had a fall, or suffered a stroke. When a patient needs surgery that can’t wait, that’s when I head for the hospital. Every so often, however, there’s one of those “anything can happen” nights, and I had one of those in February.

Getting called in to operate on a stroke patient that night was not unusual, but before the night was over I became part of a very unusual, and downright horrific, news story. That was the night a woman was viciously attacked on a subway staircase by an assailant who hit her on the head with a hammer, no fewer than 14 times, shattering her skull.

It was a bit after midnight, and I had just finished operating on the stroke patient alongside the neurosurgery resident working the night shift, Dr. Joseph Carnevale, when I was told there was a trauma patient I needed to see. Nina Rothschild had been brought in with multiple open wounds and skull fractures. She was fully conscious, and for someone who had just experienced what she had, she was remarkably calm.

The wounds were quite serious. Her entire head was covered in a spider web of lacerations – large open cuts that that I could see immediately were very deep, down to the bone. She had already had a CT scan that showed multiple skull fractures, and many bone fragments. One of the fractures was at the back of her head, directly over the superior sagittal sinus, which created a risk for bleeding or a stroke, but that wasn’t my main concern. The many open, depressed fractures presented a high risk of infection, so they were my first priority. 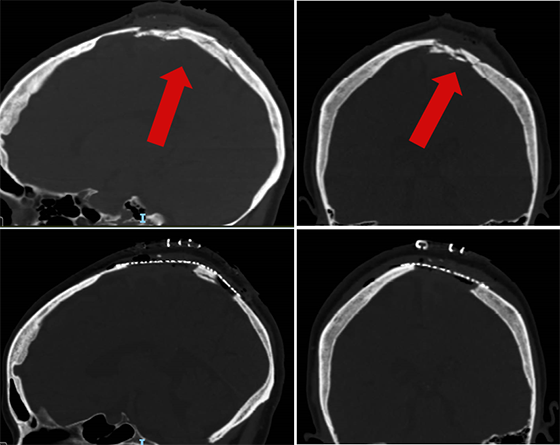 X-rays showed two particularly serious fractures (top) where the bone was shattered beyond repair. Those two skull sections were removed, bone fragments were washed out, and the bone was replaced with a special titanium mesh (bottom).

Dr. Carnevale joined me in the OR again, and after we shaved Ms. Rothschild’s head we got a close-up look at just how dramatic the wounds were. Not only were they long and deep, and covering most of her head, they were also jagged, with hair and dirt pulverized into the bone. We used liters and liters of antibiotic irrigation to wash everything out to reduce the chances of infection. I could see that the surface of the brain had been bruised, but thankfully the bruises didn’t appear life-threatening. Most importantly, the superior sagittal sinus had been spared.

Once we were satisfied that the wounds were clean, we still had the challenge of piecing her skull back together and closing her scalp. A simple skull fracture will knit back together the same way any bone heals, but these were no simple fractures. There were two sections of her skull that were utterly destroyed, so we had to remove them completely. We replaced those sections with titanium mesh, which can be cut to the dimensions of the missing skull pieces and molded to the head’s shape.

Even closing the lacerations proved to be a daunting task. Unlike nice clean surgical incisions, wounds like these are difficult to close due to the amount of destroyed tissue. We used a combination of stitches and staples to put the scalp back together, finally finishing at about 5:30 in the morning.

Normally after a surgery I feel a sense of completion, of relief that the patient did well – but with Ms. Rothschild I wasn’t ready for that yet. I was still concerned about her recovery, and what lay ahead for her. I was able to see her in the hospital over the following week as she began the initial phase of her recovery, then I saw her over the following weeks in our rehabilitation unit. It took a while, but I was finally able to breathe that sigh of relief as I saw her making such great progress.

I never fail to be impressed by the teamwork it takes to handle a terrible event like this. From the ambulance that brings an injured person in to the veritable army of nurses, physician assistants, and technicians who spring into action at a moment’s notice, 24/7, patients are always in excellent hands. The team members who work with neurosurgeons in the OR are all first-rate, and when the surgery is complete we know we are handing our patient off to the very best post-operative care team imaginable. In this case, we also had a world-class rehab team to do the hard work of day-to-day recovery over many long weeks.

It was so very gratifying recently to see Ms. Rothschild profiled in a TV news segment that showed her dramatic recovery. I know — as a neurosurgeon and a New Yorker— to expect the unexpected, but this particular case will stick with me for a long time. I am grateful to have played a role in helping this patient come through such a terrifying ordeal, and proud of the team I work alongside each day to restore our patients to good health.