The goal of surgery for an aneurysm is to prevent a rupture or to repair the damaged artery after it has ruptured. Once it has been determined that an aneurysm requires surgical treatment there are three options, all of which have been highly successful in treating brain aneurysms: 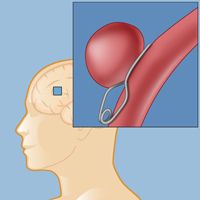 Clipping. Clipping is the more established of the surgical procedures and involves placing a tiny metal clip at the base of the aneurysm to keep blood from entering it. This is open microsurgery, in which the neurosurgeon removes a small section of the skull in order to reach the aneurysm site. The aneurysm is approached from the outside, then “clipped” to cut it off from the artery. This eliminates the danger of a rupture by taking the pressure off the weakened area of the blood vessel.  For an unruptured aneurysm, the patient typically spends 3 to 5 days in the hospital before being discharged. A longer stay is needed after surgery for a ruptured aneurysm. 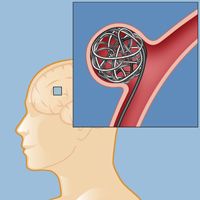 Coiling. This minimally invasive procedure consists of placing small coils directly into the aneurysm, effectively filling it up and preventing blood from entering it. This is a neuroendovascular procedure, in which a catheter is fed into a blood vessel — usually the femoral artery in the upper leg — and guided to the site of the aneurysm. The coils are then introduced through the catheter and fed into the aneurysm until it is completely filled. This effectively heals the aneurysm and virtually eliminates the possibility of future rupture. A patient typically stays in the hospital only one day after coiling of an incidental aneurysm before being discharged home.

Combination. A combined surgical and endovascular treatment may be used for complex aneurysms. The two approaches are used to complement each other for the safe obliteration of the aneurysm.

Once an aneurysm has ruptured, the goal is to seal off the aneurysm from the rest of the circulatory system to prevent a re-rupture, and preserve brain function.  In addition to surgery, patients are often given medication, including painkillers, anticonvulsants, and antifibrinolytic agents to stop bleeding.  Subarachnoid hemorrhage associated with aneurysmal rupture has a high mortality rate — 8 to 15 percent in the first 24 hours and 66 percent by 1 to 2 months after rupture.

The Weill Cornell Medicine Brain and Spine Center offers many compelling reasons to choose our experts for treatment, including:
• the lowest complication rate in pipeline treatments published in the literature (<1.5%)
• a complication rate <2% for stent-assisted coil embolizations
• a tradition of innovation, such as being one of the first sites in the country to use the innovative WEB device to treat aneurysms

We are a part of NewYork-Presbyterian, one of the top hospitals in the United States, which treats more than 300 aneurysm patients per year, the vast majority with minimally invasive/endovascular methods, making us one of the highest-volume aneurysm practices in the country.