Ischemic strokes are caused by the blockage of an artery, which deprives the brain of oxygen. If an individual experiences a mild ischemic stroke, and is treated within three hours of when symptoms begin, doctors can administer the “clot-busting” medicine called t-PA to dissolve the blockage. For patients who do not arrive in the hospital in time for this treatment, or whose strokes are moderate or severe, there are surgical options for removing the clot and restoring blood flow to the brain. 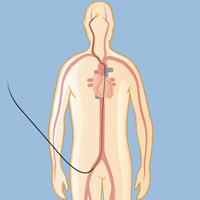 In mechanical embolectomy, a surgeon inserts a small plastic tube into an artery in the patient’s upper leg or arm and threads it under X-ray guidance into the blocked artery of the brain.

Mechanical embolectomy is an advanced, minimally invasive surgical treatment designed to remove a blockage in the blood vessel. Mechanical embolectomy devices may be used routinely up to six hours after the onset of stroke symptoms (sometimes even 12 hours), although each passing hour reduces the benefits of treatment while increasing its risks. 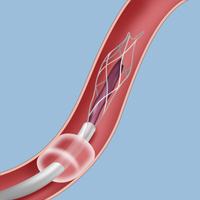 A neurosurgeon can aspirate the clot using a tiny device inserted inside the catheter.

In mechanical embolectomy,  a surgeon inserts a microcatheter (a small plastic tube) into an artery in the patient’s upper leg and threads it (under X-ray guidance) into the blocked artery of the brain. The surgeon then slips a device inside the plastic tube and advances it to the site of the clot to either aspirate it or retrieve it. 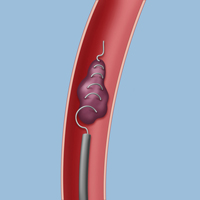 A retrieval device allows a neurosurgeon to remove a blood clot from the brain.

There are several devices that may be used for a mechanical embolectomy: the Penumbra device works by macerating the blockage (basically chewing it up into pieces) and then removing the pieces.  Stentrievers (such as the Solitaire and the Trevo) are designed to remove the blood clot as a whole. (The first-ever mechanical embolectomy device was called the Concentric MERCI retriever, developed 15 years ago by Dr. Y. Pierre Gobin and still in use today.)

Diagnosis and treatment of stroke should take place at an accredited Comprehensive Stroke Center. NewYork-Presbyterian/Weill Cornell Medical Center is such a center. Treatment options are complex and risky; therefore, treatment should be provided by experts with considerable experience in the management of stroke.