A record 20 faculty members from the Weill Cornell Medicine Brain and Spine Center were named to the 2022 list of New York SuperDoctors, published as a supplement to the New York Times Magazine on May 8, 2022. This list, assembled based on peer nomination, credentials, and achievement, is an elite roster of physicians deemed to be the very best in their field.

In addition to professor and chairman Philip E. Stieg, Phd, MD, this year’s list includes all five vice chairs – Dr. Mark Souweidane, Dr. Michael Kaplitt, Dr. Jeffrey Greenfield,  Dr. Eric Elowitz, and Dr. Theodore Schwartz – as well as many of our other experts in brain, spine, and pediatric neurosurgery, including those in Manhattan, Brooklyn, and Queens: 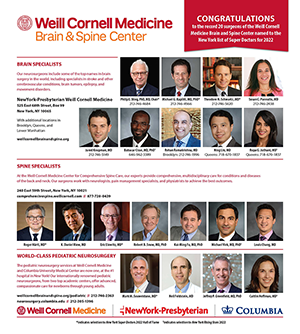 Drs. Stieg, Souweidane, Kaplitt, Schwartz, Härtl, and Elowitz were also honored as members of the New York SuperDoctors Hall of Fame for their 10 consecutive years of being selected to the list.

The annual list of SuperDoctors published each May in the New York Times Magazine and available online year round.