Dr. Kaplitt First in New York to Use Focused Ultrasound for Essential Tremor

Dr. Michael Kaplitt today became the first doctor in New York to use high-intensity focused ultrasound to relieve a patient’s essential tremor. The procedure is part of a new clinical trial testing the use of this technology to eliminate the source of tremors in a completely non-invasive way. Dr. Kaplitt and his neurosurgical team, along with Dr. Levi Chazen from Radiology and Dr. Harini Sarva from Neurology, were able to watch as the patient’s tremor diminished visibly during the procedure.

Essential tremor may be mild in some individuals, but in others it can become debilitating over time. The tremors, which are often most severe in the hands, can interfere with everyday activities such as eating, drinking, writing, or tying shoelaces. (More about essential tremor.) Current treatment options include medication as well as deep-brain stimulation (DBS), which involves implanting a battery-operated neurotransmitter under the collarbone connected to a wire that runs up the length of the neck into the scalp, where it is guided to the brain through a small hole in the skull. The tip of this wire sends the electrical impulses generated by the neurotransmitter into the precise spot in the brain that regulates the activity of the key circuits in essential tremor. Dr. Kaplitt and the Weill Cornell team have been national leaders in DBS for essential tremor, Parkinson’s disease, epilepsy and a variety of other disorders for more than 15 years. (More about DBS.)

The new focused ultrasound procedure takes advantage of a technology that was successfully used in the past to treat uterine fibroids and breast and prostate cancer. Adapting this to the brain required more advanced technology to overcome the obstacle of sound penetration through the skull and to ensure the precision necessary to accurately reach the desired target without the ultrasound affecting the rest of the brain. The technology is still being used under a study that Weill Cornell is participating in, but it was approved by the FDA just last week for use on patients with essential tremor and should be available to any qualified patient in the next few months.

The video below, provided by the device manufacturer, shows how the procedure works:

The new procedure relies on magnetic resonance imaging (MRI) to pinpoint the exact location in the brain where tremors originate, then uses MRI guidance to focus the many ultrasound waves on that location. The patient, who is awake throughout the procedure, is fitted with a helmet that holds an array of 1,000 sources of ultrasound energy, each beam so small and low-energy that it passes harmlessly through healthy brain tissue on its way to the target. The device uses MR thermometry to measure the temperature at the target and elsewhere in the brain during the procedure, and adjusts the energy emanating from each of the 1,000 sources so that precisely the right amount of energy reaches the target. No single wave damages surrounding brain tissue, but the sum of the energy reaching the focus is enough to eliminate – or greatly reduce – the tremors. 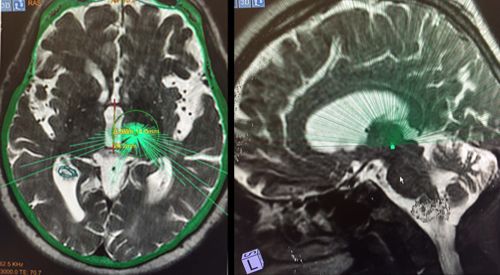 A slice of the focused ultrasound beam plan shows some of the nearly 1,000 beams directed at the source of the tremors. Left: the axial view (from above); right: the sagittal (side) view

Since the procedure is non-invasive, there is a greatly reduced risk of complications related to open surgery. This uses otherwise harmless ultrasound energy, not radiation, so there are none of the typical radiation-related risks. While it is expected that most people with essential tremor will be able to take advantage of this technology, there are a few limitations which may not allow certain patients to undergo this procedure. For most of those patients, deep brain stimulation will still likely be a good option. 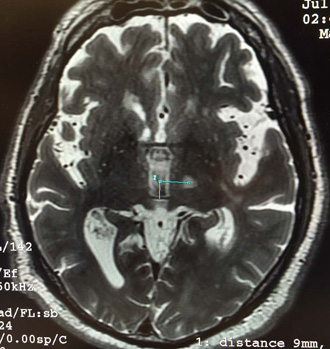 Dr. Kaplitt, whose pioneering work testing gene therapy for Parkinson’s disease made him the perfect neurosurgeon to perform this cutting edge procedure, also sees its potential for Parkinson’s disease, brain tumors, and other disorders. “We have already demonstrated in our laboratory that we can expand the use of focused ultrasound home in exactly on a location where we need to deliver gene therapy or chemotherapy, create temporary holes in the blood-brain barrier that normally prevents molecules from crossing from the bloodstream into the brain, then deliver the agents we need to the precise locations where they are needed,” he says. “This has tremendous implications not only for movement disorders, but also for Alzheimer’s disease, metastatic brain tumors, and other disorders that may benefit from our delivering genes and drugs to the exact location where they’re needed without invasive surgery.” (Read Dr. Kaplitt's blog post about his experience performing this procedure.)

This new technology is available in New York as the result of a unique partnership among Weill Cornell Medical College, the Departments of Radiology and Neurological Surgery, and Weill Cornell Imaging. Yesterday’s procedure was performed at the Citigroup Biomedical Imaging Center on East 72nd Street. To inquire about this procedure for essential tremor or surgery for any type of movement disorder, please contact Dr. Kaplitt’s office at 212-746-4966.

More about Dr. Kaplitt
More about the Parkinson's Disease and Movement Disorders Service