Dr. Theodore Schwartz has been appointed to the newly created position of David and Ursel Barnes Professor of Minimally Invasive Neurosurgery. The endowed professorship is the gift of David Barnes and his wife, Dr. Ursel Barnes, who made their $3 million donation in gratitude to Dr. Schwartz after he removed a brain tumor that was threatening Mr. Barnes’ senses.

Mr. Barnes had been diagnosed with a meningioma near his optic nerve and feared for his vision. He had already lost his sense of smell and was losing hearing in one ear. Doctors near his home in the U.K. and elsewhere in Europe had told him that removing the tumor would require open brain surgery — a removal of the front of his skull — due to its delicate location. 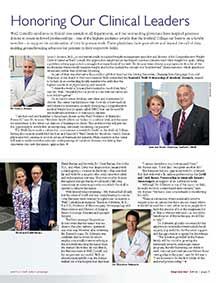 See more about the Barneses, and the gift, in the September issue of Weill Cornell Milestones magazine.

Hoping for a less drastic solution, the Barneses were referred to Dr. Schwartz, who determined that a minimally invasive approach from just above the brow line was indeed possible.

The surgery was successful, and Mr. Barnes was discharged only four days later. Today he has a barely perceptible scar at his eyebrow from the incision.

Dr. Schwartz is internationally known as a leader in minimally invasive neurosurgery, including not only endoscopic surgery for brain tumors for also transnasal surgery for pituitary tumors, and has lectured around the world on the topic.