Today, the peer-reviewed journal Lancet Oncology published the highly anticipated results of Dr. Mark Souweidane’s first-ever dose escalation study using convection-enhanced delivery (CED) in patients with diffuse intrinsic pontine glioma (DIPG). The milestone Phase I clinical trial, which investigated the safety of using CED to bypass the blood-brain barrier and administer a drug directly to a brain stem tumor site, resulted in no serious adverse effects and no dose-limiting toxicity; researchers conclude that the technique is safe to use in children.

These extremely promising results bring forth a new potential for an effective treatment for one of the deadliest brain tumors in children, with a median survival of less than 12 months. By delivering the agent into the tumor through a surgically placed infusion cannula, the procedure drastically increases the concentration of the drug at the site of the tumor while avoiding the dangerous systemic toxicity that accompanies IV or oral chemotherapy. (Read the abstract.)

The therapeutic agent 124I-8H9 consists of the 8H9 antibody, which is produced by mice and has been shown to attack many kinds of tumors, combined with the radioactive substance 124I. Earlier studies have shown this combination to be effective, as 8H9 binds to the tumor and 124I kills cancer cells with radiation. This clinical trial was the first time CED was used to administer 124I-8H9 to a human brain.

The study validates CED as a safe and efficient method to deliver drugs directly into a tumor with minimal to no systemic exposure. The average dose safely absorbed was more than 1,200 times that of the mean whole-body dose, providing an astronomical benefit over standard chemotherapy for DIPG and other types of malignant glioma. In fact, seven dose escalations were tested as the study progressed, and the procedure resulted in zero dose-limiting toxicity. 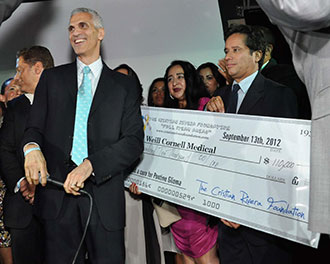 Dr. Souweidane's research has been largely supported by families and friends of children diagnosed with brain tumors, including the Cristian Rivera Foundation.

Over the course of five years, 28 patients who had previously received radiation therapy were successfully treated with this alternative drug delivery method during Dr. Souweidane’s clinical trial, which took place at Memorial Sloan Kettering Cancer Center. The results are so promising they are expected to eventually change the landscape of future pediatric brain tumor protocols.

“I find myself at the threshold of something very meaningful, and I have never felt more optimistic. Now more than ever, I’m determined to keep going, to get to the next level, and to get my hands on a real cure for this killer,” said Dr. Mark Souweidane. (Read Dr. Souweidane’s blog post on these results.)

Direct drug delivery methods have a very specific advantage for patients with disease in the central nervous system. Historically, the delivery of drugs orally or intravenously proved ineffective because of the blood-brain barrier — a highly protective layer that prevents the agent from reaching the brain tumor itself, yet the rest of the body is affected by the medicine’s harsh side effects. Because of this barrier, very high doses of chemotherapy are required to get even a small amount of medicine to the tumor, which is toxic to the rest of the body and poses great risk of severe long-term side effects. By placing the agent outside the blood vessels, directly into the tumor, the team is able to greatly reduce that toxicity while maximizing the attack on the tumor itself. 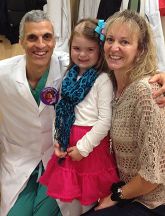 On May 1, 2012, Caitlin Downing became the first child treated in the clinical trial.

CED clearly merits further development in clinical studies for children with DIPG. Based on the results of the study, Dr. Souweidane is nearing the launch of a formal, multi-institution expansion of the clinical trial that will explore new agents and combinations delivered via CED. This next step will allow more children to be treated nationwide, testing different doses and agents in a quest to find a cure.

Dr. Souweidane has been working on DIPG research for more than twenty years. His dedication to finding hope for his patients has been unwavering, and this trial represents an enormous leap forward in DIPG research.

"This trial is about hope," says Dr. Souweidane. "It's about admitting that we have been failing these children for decades, and taking a huge departure from the standard protocols in order to provide children with more effective options, less toxicity and increased hope for the future."

See Dr. Souweidane’s blog post about this milestone: How It Feels to Make Progress Against DIPG

Consider making a donation to support the expansion of Dr. Souweidane's trial nationwide.

What Is DIPG?
Diffuse Intrinsic Pontine Glioma, also referred to as pontine glioma, infiltrative brainstem glioma, or DIPG, is a rare tumor of the brainstem that occurs almost exclusively in children. A pontine glioma occurs in a most delicate area of the brainstem (the "pons"), which controls many critical functions, including breathing and blood pressure. Its location, as well as the way it infiltrates normal brain tissue, makes it especially difficult to treat.

How many cases are there every year?
There are about 200-250 new cases of DIPG diagnosed each year in the United States, usually in children under the age of 16. DIPG affect boys and girls equally.

What kind of tumor is DIPG?
DIPG is a glioma, meaning that it originates from the glial (connective/supporting) cells of the brain.

Do adults get DIPG?
Gliomas of the brainstem, like DIPG, are uncommon in adults, but in children they are the leading cause of deaths from brain tumors. (In adults, the most common type of glioma is glioblastoma multiforme, or GBM, the brain tumor that in recent years took the lives of Senator Edward Kennedy, baseball star Gary Carter, and Vice President Joe Biden’s son Beau, and that was recently diagnosed in Senator John McCain.) In the United States, there are about 400 new diagnoses a year of brainstem gliomas, and most of these are DIPG.

What are the warning signs of DIPG?

Pontine gliomas grow quickly, so symptoms can appear suddenly and progress rapidly. Because the brainstem controls a number of critical life functions, DIPG can cause significant neurological problems. Pontine gliomas often affect the cranial nerves, so many of DIPG's early symptoms appear in the facial muscles, often affecting the eye and eyelid movements. The most common symptoms of DIPG are:
• Problems with eye movement (often in both eyes), including difficulty looking to the side, double
• vision, drooping eyelids, and the inability to close the eyes completely
• Facial weakness, and drooping on one side of the face
•  Trouble chewing or swallowing, gagging while eating
• Limb weakness, difficulty standing or walking, abnormal gaits, unbalanced limb movements

What are the current treatments?
Although surgery is the treatment of choice for many other types of brain tumors, it's not possible for children with DIPG because the tumor infiltrates extensively into normal brain tissue. Chemotherapy is mostly ineffective, since anti-cancer drugs cannot cross the blood-brain barrier and reach the tumor. Radiation treatments can help alleviate symptoms, but they are not a cure. Radiation generally induces a “honeymoon” period in which the child appears to be healthy, but the tumor inevitably comes back and the child’s health deteriorates rapidly. Most children diagnosed with DIPG die within 9 months to a year of diagnosis.

What causes DIPG?
Scientists do not yet know what causes DIPG, and the cancer is so rare that it hasn’t received nearly enough research funding to find a cause, a cure, or even better treatment options. Survival rates have not improved much over the last few decades due to this lack of new research.

What is the blood-brain barrier?
The blood vessels in the brain are different from those elsewhere in the body in that they prevent many molecules from passing through them. Normally, as blood circulates it can deliver a wide range of molecules into the organs. That’s why chemotherapy given orally or by IV works for many tumors, since a drug can cross out of the bloodstream anywhere in the body – except the brain. Blood vessels in the brain are far less porous, and they protect the brain from toxins by not allowing them to pass through what we call the “blood-brain barrier.” That barrier is a good thing, except when it prevents cancer-fighting chemotherapy to reach a brain tumor.

Why is DIPG inoperable?
DIPG is both diffuse (meaning that it’s not one solid tumor, but rather consists of web-like threads of cancerous cells) and pontine (meaning that it’s located on the pons of the brain stem, which controls such basic functions as breathing). A solid tumor with defined borders can often be safely removed surgically, but a diffuse tumor has too many scattered cells and threads to reach. And the pons is simply too critical a structure, and too delicate, for a surgical solution.

Why hasn’t more research been done to find a cure?
Most research in the United States is funded either by the federal government or by large pharmaceutical companies. Those dollars are allocated to a great extent on how many patients a new cure would help. Since DIPG affects “only” about 200 children a year, large funding organizations have been reluctant to support research to find a cure. In contrast, acute lymphoblastic leukemia (ALL) will be diagnosed in about 6,000 children this year – and decades of research have resulted in very high cure rates. That’s why research into DIPG and other rare pediatric brain tumors is largely funded by private donations, and why it lags so far behind research into more common cancers.

Can DIPG be biopsied for genetic sequencing/targeted therapy?
Yes. Biopsy is a relatively safe procedure and generates exhaustive information related to the genetic and molecular features of the tumor. While the promise of personalized medicine is great, this form of treatment for DIPG has not yet translated into practical strategies.