Dr. Mark Souweidane, Director of Pediatric Neurological Surgery, has received FDA approval for a clinical trial for young patients diagnosed with Diffuse Intrinsic Pontine Glioma (DIPG). Dr. Souweidane is the Principal Investigator on the clinical trial, which will use a novel surgical technique (convection-enhanced delivery, or CED) to deliver a tumor-fighting agent directly to the site of the glioma, bypassing the blood-brain barrier that prevents most drugs from reaching these deadly brain stem cancers in children. (Find out more about DIPG.)

The trial, which is being conducted in partnership with Memorial Sloan-Kettering Cancer Center, will use CED to deliver a therapeutic agent called 124I-8H9 directly to the tumor site using a surgically placed infusion cannula. The agent consists of the 8H9 antibody, which is produced by mice and has been shown to attack many kinds of tumors, combined with the radioactive substance 124I. In studies on other kinds of cancer, 124I-8H9 has delivered a one-two punch, with 8H9 binding to the tumor and 124I killing the cancer cells with radiation. The procedure has been tested safely in animals, but this clinical trial is the first time CED has been used to administer 124I-8H9 to a human brain. 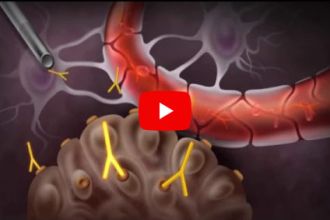 Initial patients will be treated with a small dose of 124I-8H9 and monitored for side effects. As the study progresses, new patients will be treated with increasing doses as Dr. Souweidane monitors the safety and effectiveness of each dosage. The study is expected to last for one to two years, with a minimum of 12 DIPG patients between the ages of 3 and 21 enrolled and monitored.

Dr. Souweidane has been working on DIPG research for more than a decade, and preparing for this clinical trial for much of that time. His dedication to finding hope for his patients has been unswerving, and this trial represents an enormous leap forward in DIPG research.

"This trial is about renewed hope," says Dr. Souweidane. "It's a departure from the standard, ineffective, therapy, and has the potential to create a whole new paradigm in brain tumor treatment. Delivering drugs intravenously hasn't worked because of the blood-brain barrier — to get even a small amount of medicine to the tumor we need high doses of chemotherapy, which is toxic to the rest of the body. But placing the agent outside the blood vessels, directly into the tumor, greatly reduces that toxicity while maximizing the attack on the tumor itself."

This new approach represents a ray of hope for families facing the diagnosis of DIPG. This rare brain tumor has been uniformly fatal, made all the more heartbreaking by its propensity to strike very young children. The tumors are inoperable due to their ill-defined borders as well as their position in the delicate pons area of the brain stem. Radiation has been the standard approach, but it is not a cure and usually extends life only by a short time. Some 200 to 300 children in North America a year die from DIPG — usually within months of their diagnosis.

Unlike other critical diseases of childhood, DIPG has suffered from a lack of funding that has meant a complete lack of progress in survival rates. Over the past few decades, survival rates for medulloblastoma have reached 70 percent; for acute lymphoblastic leukemia the rate is now 85 percent. Over that same time, survival rates for DIPG have remained essentially at zero, as major foundations directed their support toward more common conditions. It is Dr. Souweidane's hope that this innovative clinical trial will be a major first step in creating a survival rate for DIPG for the first time.

Dr. Souweidane has been fortunate to have the support of several organizations and groups whose gifts have provided much-needed funding to help him reach this point. He credits the Dana Foundation, The Cure Starts Now, the Cristian Rivera Foundation, the Beez Foundation, the Matthew Larson Foundation, and St. Baldrick's with being instrumental in allowing him to complete the important research needed before this clinical trial could begin.

The DIPG trial will be conducted at both Memorial Sloan-Kettering Cancer Center and Weill Cornell Medical Center, where Dr. Souweidane holds appointments. For more information about the trial, call Dr. Souweidane's office at 212-639-7056, or visit the complete description of the trial on clinicaltrials.gov.

Find out more about the Children's Brain Tumor Project

Update as of August 1, 2013: We are now in the second year of this trial, and we are about to complete the third dose level of a planned four levels. It would be premature to draw any conclusions before the trial is complete and the data analyzed, but we are happy to report that all patients have tolerated the surgical procedure and we will continue to increase the dose.

Update as of November 2014: Dr. Souweidane recently received approval from the FDA for a continuation of this important clinical trial to test three additional dosage levels. To date there have been no adverse effects from the procedure. Read more about the trial extension.

Update as of June 2015: Dr. Souweidane has now treated 21 patients, at six dosage levels, with no adverse effects. He expects to treat three to five more patients this year, at one additional dosage level, to complete this Phase I trial. Having established that the procedure is safe, Dr. Souweidane then plans to expand the trial to multiple institutions so he can test more and different drugs, alone and in combination, in search of the most effective weapons against this tumor. Lab research going on right now is paving the way for the next stages of clinical trials, with drug combinations being tested in mouse models. Read more about this research.

Update as of July 2016: Dr. Souweidane is now treating patients at the seventh dose level and expects to treat the 30th and final patient in the trial this summer. His team is already working to analyze the results and ready them for publication, even as they prepare for the next stages of the trial.
Update as of September 2016: The final patient in the trial was treated at the seventh dose level this summer, so Phase I has officially concluded. The FDA has approved repeated treatments on patients who already received the infusion. See more about repeated infusions.

Update as of June 2017: We are currently recruiting additional patients on the Phase 1 study with further dose escalation. Our concept for a multicenter study through the PBTC has been approved by CTEP. This is a feasibility study. We are also submitting a Phase 1 study between MSKCC and UCSF for a different drug (Panobinostat) using CED in a similar fashion to what we have been doing.

Update as of June 2018: Results published!