In what could be a breakthrough in the treatment of neurological disease, a team led by physician-scientists at NewYork-Presbyterian Hospital/Weill Cornell Medical Center has completed the first-ever Phase 1 clinical trial using gene therapy to battle Parkinson's disease.

The study of 11 men and one woman with the progressive neurodegenerative illness found that the procedure, in which surgeons inject a harmless gene-bearing virus into the brain, was both safe and resulted in improved motor function for Parkinson’s patients over the course of one year. The findings are published in the June 23 issue of The Lancet.

"These exciting results need to be validated in a larger trial, but we believe this is a milestone not only for the treatment of Parkinson's disease, but for the use of gene-based therapies against neurological conditions generally," says lead researcher Dr. Michael Kaplitt, associate professor of neurological surgery and the Victor and Tara Menezes Clinical Scholar in Neurological Surgery at Weill Cornell Medical College, and director of Movement Disorders Surgery at NewYork-Presbyterian Hospital/Weill Cornell Medical Center.

Dr. Kaplitt has devoted much of his academic research career to the development of effective gene therapy techniques against Parkinson’s disease and other neurological disorders. In fact, 13 years ago, he and Dr. Matthew During pioneered a now widely used gene-delivery technique for the brain using an altered, harmless form of adeno-associated virus (AAV). In 2003, Dr. Kaplitt performed the world’s first gene therapy surgery for Parkinson’s, conducted at NewYork-Presbyterian/Weill Cornell.

"Viruses exist in nature mainly to transfer their own genes to the host cell," he explains. "So, we modify the AAV in such a way that the only gene it carries is the one we want to deliver to the therapeutic site.” 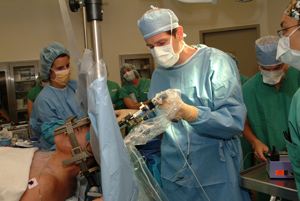 In this case, the 'gene of interest' is the glutamic acid decarboxylase (GAD) gene. "GAD makes a chemical called GABA, a major inhibitory neurotransmitter in the brain that helps 'quiet' excessive neuronal firing," explains Dr. During, the senior author of the current study, who worked on this research while at Weill Cornell. Dr. During is now professor of molecular biology and cancer genetics at Ohio State University.

"In Parkinson's disease, not only do patients lose many dopamine-producing brain cells, but they also develop substantial reductions in the activity and amount of GABA in their brains. This causes a dysfunction in brain circuitry responsible for coordinating movement," Dr. During explains.

The researchers’ bold idea: to insert the GABA-producing gene GAD back into an area of the brain called the subthalamic nucleus, a key regulatory center within this motor circuit.

"Our hope was that with a single operation to this single site, we could boost GABA production and thereby normalize the function of the entire circuit," Dr. Kaplitt says. "Not only would this alter the chemical balance in the subthalamic nucleus; it should also provide GABA to other parts of the network that weren't getting enough of the neurotransmitter."

To test that theory, the investigators injected the GAD-bearing AAV vector into the subthalamic nucleus of each of the 12 Parkinson's patients, but only on one side of their brains. 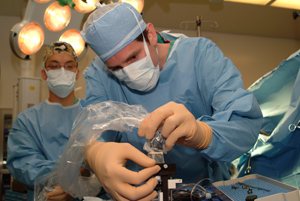 "Because this was the first such study of its kind, we targeted just one side of the brain initially out of concerns for the patients safety," Dr. During says. "However, since the patients were symptomatic on both sides of the brain, this also provided an untreated side for comparison with the treated hemisphere."

The researchers then used a standard assessment of motor function, the Unified Parkinson’s Disease Rating Scale (UPDRS) to track changes in patients’ symptoms over the next 12 months. They also tracked changes in each patient’s brain activity using positron emission tomography (PET) scans. These were both performed by the other two principal authors of the study, Drs. Andrew Feigin and David Eidelberg of the Feinstein Institute for Medical Research at North Shore-Long Island Jewish Health System.

"Like all Phase 1 studies, this one was primarily focused on gauging the safety of the technique," Dr. Kaplitt says. "And on that count it succeeded brilliantly: we saw no adverse events related to the treatment, no immunological changes or infections over the year of the study, no imaging evidence of toxicity whatsoever."

The results in terms of clinical and neurological efficacy were also encouraging.

"In terms of the UPDRS scores measuring motor function, we observed significant improvements in the 'off-state' phase — meaning that period when Parkinson's patients have been off their medicines for 12 hours — and also in the on-medication phase, when they were taking their drugs," Dr. Kaplitt says.

For example, at three months post-treatment, the patients as a group had already charted between a 25 percent and 30 percent improvement in off-state UPDRS scores, and those improvements persisted over the full year of the study. Similar results were seen in the on-medication state, the researchers found. Several individual patients showed impressive improvements of between 40 percent and 65 percent. 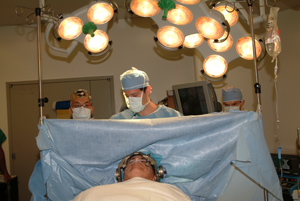 "That was really surprising and heartening, because traditional Parkinson’s surgeries improve patients in the off-state but not as frequently in the on-medication state," Dr. Kaplitt says.

"Interestingly, these improvements in motor function were due to the side of the body controlled by the brain hemisphere that had received the treatment," Dr. During notes. "Also, AAV tends to require several weeks to maximize and stabilize production of a therapeutic gene, and in fact we did not see significant clinical changes until more than 1 month after surgery. These both further suggest that it was the gene therapy that was driving their improvement."

There were also strong trends toward reductions in medication-linked dyskinesia (movement difficulties) and improved activities of daily living, although neither of these trends reached statistical significance.

Finally, PET scans revealed a more normal level of activity up to 1 year following surgery in exactly those areas of the brain that the researchers had been hoping to fix. Again, this improvement "occurred only in that half of the brain that had received the GAD gene," Dr. Eidelberg says.

"Will these remarkable improvements persist? Only longer follow-up can tell, but prior studies in animals, including primates, suggest that the transplanted gene does stay active for years," Dr. Kaplitt says.

"Our next step of course is to move towards a larger, more definitive efficacy-centered study," he notes.

"We believe that this breakthrough trial has implications that go far beyond Parkinson's research," Dr. Kaplitt adds. "It's taken us nearly two decades of hard work to get here, but the success of this trial lays the foundation for the use of gene therapy against neurological diseases generally. We've now shown that the genetic modification of the patient's own brain cells can be done safely, and it appears to have enough effectiveness in this case to justify further exploration — potentially opening up gene therapy for a host of brain disorders."

This work was funded by Neurologix, of Fort Lee, N.J., which is developing the adeno-associated virus-borne GAD (AAV-GAD) agent. Drs. Kaplitt and During are co-founders of the company and remain consultants. Additionally, Dr. Kaplitt’s father, Dr. Martin Kaplitt, is chairman of the board of Neurologix, and as such has stock ownership and receives salary.

According to the National Parkinson Foundation, 1.5 million Americans currently have the degenerative illness, which strikes men and women in roughly equal numbers, usually after the age of 65. The illness is characterized by a steady loss in brain cells producing the neurotransmitter dopamine, which alters the function of brain networks controlling motor function. Medications, as well as surgical techniques such as deep-brain stimulation, can treat some of the symptoms of the progressive disease, but there is no cure.

Neurology and neurosurgery at NewYork-Presbyterian is ranked fourth in the 2006 national Best Hospitals listing by U.S.News & World Report.