"After Focused Ultrasound, I’ve Gotten My Life Back!"

Katina Ansen didn’t mind her hand tremors too much at first. The shaking was mild, and as long as she could still create art, she found it to be tolerable. Her illustrations and paintings on delicate surfaces including ceramic, fabric, and glass have earned her commissions and exhibits around the world. But when the tremors got worse and threatened her livelihood and her passion, she fell into despair.

“I was initially diagnosed with essential tremor in my forties, and for a while the tremors waxed and waned,” Katina said. When the shaking flared up, she found it difficult to work on small drawings, sign her name, or hold a glass of wine, but it would pass. Over the next decade, however, the occasional flare-ups became more constant.

“It was very frustrating and really demoralizing,” she recalls. “I could not be me and do my work. I tried to prop my hand up or hold it with the other hand but I could no longer do the fine, detailed work I’m known for. And I was so clumsy, constantly knocking things over, spilling wine at an event at the Metropolitan Opera… It wasn’t only robbing me of my work; I was totally losing my identity and my livelihood.”

Katina also knew what the future had in store for her. Her grandfather had died before she was born, but she’d heard how people thought he was an alcoholic because of the way his hands shook (he wasn’t). Her father had developed mild tremors in his sixties, but by the time he was in his eighties the shaking was so severe it was impossible for him to shave or to dial a phone. Katina knew the tremors were hereditary, and she began to fear she would never paint again. 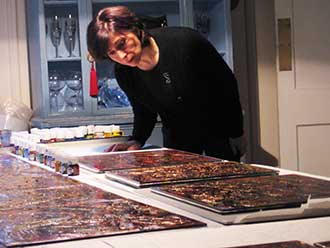 Her doctor prescribed medication, which is the usual first step for essential tremor. She started taking propranolol, a beta blocker used to treat chest pain, high blood pressure, and heart rhythm disorders, on an as-needed basis. As many other patients have learned, however, the medication comes with side effects. It was affecting her vision, making her dizzy, and lowering her heart rate unhealthily. Her doctor added primidone, an anti-convulsant, but even the two drugs together could not stop the tremor – and she still had the side effects. She couldn’t stand it.

Normally a positive person, Katina fell into despair. Her friends and fellow artists said she became so dark and so miserable, she was no longer fun to work with. “I was so devastated I joked with my husband about retiring in a state that allows assisted suicide,” she says. “I knew I couldn’t deal with this much longer.”

One neurologist suggested deep-brain stimulation (DBS), a surgical procedure used to treat a variety of disabling neurological symptoms, including those related to Parkinson’s disease. DBS relies on an electrode implanted into the brain to emit pulses of energy that block the tremor at the source.  It’s been successful for many patients. For many others, however, including Katina, the prospect of an electrical probe in the brain was simply too daunting. “Brain surgery was just overwhelming to think about,” she says. “I was concerned it would be asking for more trouble.” 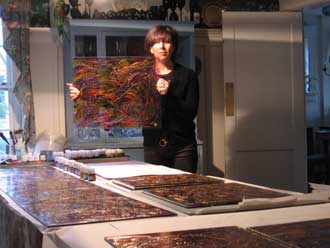 By 2016, Katina was suffering on a daily basis as the condition started to affect other parts of her body. Dystonia in her neck was causing her head to turn and her arms and legs to start cramping. Then one day her husband heard about high-intensity focused ultrasound, a non-invasive procedure for the treatment of essential tremor. One neurologist cautioned against it, but as Katina says now, “he clearly did not have the right information.”

“When I finally met Dr. Kaplitt, I couldn’t believe I would ever be able to continue my passion and livelihood in the arts,” Katina says. Luckily, Dr. Kaplitt believed she would benefit from the new procedure.

“Katina was a great candidate for focused ultrasound,” he says. “She was strong and very motivated. Our team has worked with so many patients, both in the clinical trials and since FDA approval, and we’ve watched as tremors fade away or even stop completely, while the ultrasound was being administered.  I was confident we could help her.”

Before the procedure, Dr. Kaplitt asked Katina to do a series of baseline hand exercises, including drawing spirals and straight lines. Like most patients with severe essential tremor, Katina was able to produce only the shakiest of samples. Then began the high-intensity focused ultrasound procedure, which is delivered in short, measured pulses. Between each pulse, Katina repeated the writing exercise, and she watched in amazement as her hand got progressively steadier. By the final pulse, she says in wonder, “my hand simply stopped trembling.”

Since then, Katina has regained more than just a steady hand. She has her cheerful disposition back, along with the ability to paint and the drive and ambition to exhibit again. A competitive swimmer when younger, Katina has also gotten back in the water again. “I’ve gotten my life back,” she exclaims. “And that is a miracle. It’s magic!”

Most importantly, Katina now knows that her son and daughter, now in their 30s, will have a solution if and when tremors appear later in life. “That was a major source of concern,” she says, “but now I have a tremendous amount of comfort about their future!”

Update March 2021: Katina recently participated in a second clinical trial testing the procedure on the second side of her brain. The results have been near perfect! Read the update here