There are perks and privileges that come with being a public figure, and Emmy award-winning investigative journalist Alicia Ortega had always appreciated them. But as she discovered when she needed spine surgery, fame has its down sides as well.

“Nobody wanted to touch me!” she says – local doctors in Dominican Republic, where Alicia is Executive Vice President of the SIN Group and hosts “El Informe con Alicia Ortega,” were apparently too nervous to treat such a well-known newscaster. Fortunately for Alicia, she found Dr. Roger Härtl at Weill Cornell Medicine and NewYork-Presbyterian, who got her back on her feet, and back to work, in no time.

Alicia had had minor back problems for years, which she managed with therapy. But one day from out the blue, the pain began to take on a life of its own, making it difficult for her to walk. After undergoing an MRI, Alicia was told she had a herniated disc in her lower back. Doctors sent her to therapy again and put her in traction to try to relieve the pressure. It didn’t help. A nerve block also didn’t work. Her trusted surgeon was on vacation, and no other doctors at the medical center where she’d been hospitalized for almost five days wanted to perform that procedure on such a celebrity.

“A friend of mine had had surgery at NewYork-Presbyterian, and she recommended them,” Alicia recalls. “When my family called them, they said Dr. Härtl was available.” Dr. Härtl is a world-renowned expert in herniated discs, especially minimally invasive surgical approaches that shorten recovery time, and he agreed to do Alicia’s surgery.

“They flew me out on a Tuesday, six days after the pain started,” says Alicia. It’s a little unusual for a patient to spend time in the hospital before surgery, but Dr. Härtl needed time for the scans and tests required to see the extent of the herniation for himself. When he looked at the scans, Dr. Härtl realized that Alicia's pain was not caused by the lower back issue the Dominican doctors had seen, but from a far lateral herniated disc further up in her spine. That herniation didn’t require full fusion – Dr. Härtl knew he could perform a microdiscectomy instead. A minimally invasive microdiscectomy would not limit Alicia’s movement as a fusion might, and she would recover far more quickly than she would after open surgery.

In excruciating pain as she awaited the surgery, Alicia was afraid she would never feel better. When she met Dr. Härtl, however, she was comforted and reassured by his calm confidence.

“I always have to be in control,” she laughs now. “But those blue eyes – God talked to me through his eyes and told me to relax and let go. On the day of the surgery I wasn’t praying for myself, I was praying for him to do a good job!” 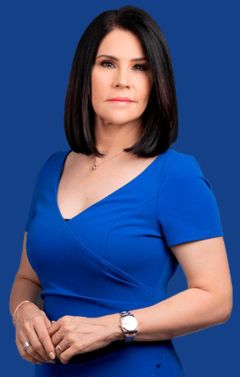 Not surprisingly, Dr. Härtl did a good job and the surgery was a success. “I was up and walking right after the surgery,” Alicia marvels. “On the third day Dr. Härtl told me I could go to the mall, where I bought my oldest daughter's wedding dress. I flew back home to Dominican Republic a week later and got back to work shortly thereafter."

“I was so glad to be able to help Alicia,” says Dr. Härtl. “As anyone who has had a disc herniation knows, the pain can be intense. But getting the correct diagnosis is critical, and that was the key in Alicia's case. The problem disc in her lower back was more noticeable on the scans, and it may give her trouble in the future. But with better diagnostics available here, we could see that the herniation that was actually causing her pain was a couple of vertebrae above that. Being able to relieve her pain – especially with a minimally invasive procedure instead of major open surgery – and get her back on her feet and restored to good health, is extremely gratifying to me.”

Alicia knows how lucky she is to have had the opportunity to fly to New York for surgery with a top expert, and she is thankful for that. She joins a roster of hundreds of patients from around the world who have traveled to New York for spine surgery with Dr. Härtl, and she is grateful for each pain-free day. “I’ve recommended Dr. Härtl and NewYork-Presbyterian to others since my surgery,” she says, "and Global Patient Services made it all happen, taking care of every detail, from reaching out to Dr. Hartl to scheduling all appointments after the surgery." For those who are able to do it, she says, it’s worth the trip.