By Cindy Campbell
Ty Louis Campbell was a beautiful baby, then a rambunctious toddler with curly blonde hair and an infectious smile. At two years and ten months old, Ty was the picture of health — no developmental delays, no medical issues — but he had been a terrible sleeper from the day he was born. He woke up frequently throughout the night crying, which we discussed with his pediatrician several times, and we finally scheduled a sleep study for August 2010.

Before the study date arrived Ty had a solid week of increasingly sleepless nights and we had to take him to the emergency room near our home on Long Island. The ER doctors didn’t seem very concerned, but they recommended an MRI “just in case.” We had to wait overnight, and of course Ty slept beautifully at the hospital. Lou and I laughed at ourselves the next morning and couldn’t wait to get the MRI over with so we could go home looking like the silly, worried parents we thought we were.

We packed up our things and waited to go home. Lou saw the neurology team heading toward our room and asked with a smile, “Is it good? Can we go? No?” With that he turned to look at me and the walls around us began to melt. The sounds in the room became amplified and muffled. The world around us was falling to pieces.

The MRI image showed a tumor, about one inch in diameter, growing from the base of Ty’s skull and pushing against his brainstem. No wonder he hadn’t been able to sleep: Lying down increased the pressure on his brainstem and had been causing head pain. The doctors told us to take Ty home and take our time deciding on surgery.

The following week was a blur. We spoke with several of the nation’s best pediatric neurosurgeons and learned about different surgical approaches (which ranged from cutting through his upper jaw to trying an innovative endoscopic approach through his nose and mouth). We spoke to strangers who had children going through similar surgeries and listened to countless recommendations (“you must talk to this doctor… you must look into this facility… you must feed him apricot seeds”).

But during this short week Ty began to fall apart before our eyes. It was as if the tumor had decided to come out of hiding with a vengeance. Ty’s speech began to slur. He lost the ability to drink from a straw, then from a sippy cup. His head pain was becoming unbearable and he started suffering during the daytime, too. Instead of taking our time to make a decision we had to rush him into surgery, where 90 percent of the tumor was successfully removed endoscopically and a VP shunt was placed to relieve intracranial pressure.

A few weeks later Ty’s final pathology came back, and we learned that his tumor was an extra-renal rhabdoid tumor, also called atypical teratoid/rhabdoid tumor (AT/RT).

We transferred Ty to Memorial Sloan-Kettering, where we first met Dr. Jeffrey Greenfield and his team at the Weill Cornell Medicine Pediatric Brain and Spine Center. Poor Ty often suffered from shunt-related complications, so during the course of treatment we became very close with the pediatric neurosurgeons.  Especially Jeff.  We became more than doctor and patient.  We became family.

What followed were months of infections, chemotherapy, surgeries, and — by December of 2010 — the grim news that he now had tumors on his spinal cord and probably only had weeks to live. Our hearts broke into a million pieces, but we continued to hold onto hope. 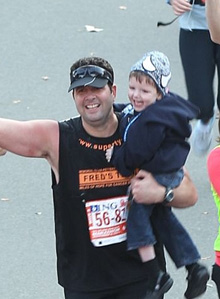 In November of 2011, Lou carried Ty across the finish line of the New York City Marathon.

Miraculously, in January 2011, Ty’s spinal tumors appeared to be shrinking spontaneously and his mystified doctors had no explanation. Still, the next couple of months were endless rounds of fever, infection, surgeries, and the rapid regrowth of the original tumor at his brainstem. We tried chemotherapy, radiation, steroids, and more surgery. He became almost completely paralyzed, then regained some movement. Somehow, by September 2011 he was able to enroll in pre-school. In November, Lou carried Ty across the finish line of the New York City Marathon. In January and February of 2012, MRI scans showed him to be cancer free thanks to life-saving surgeries led by Dr. Greenfield.

But just the next month, what we thought was a virus turned out to be radiation necrosis — an after-effect of the radiation treatment he’d had a year earlier. Ty lost all movement in his arms and legs, literally overnight, and he began daily oxygen treatment in a hyperbaric chamber in addition to his daily chemotherapy and physical therapy. August marked two years of our living with Ty’s diagnosis — he showed no evidence of cancer, but he was still paralyzed. He’d been through 60 two-hour sessions in the oxygen chamber on top of his 19 surgeries and countless chemo sessions.

In September 2012 Ty had his 20th surgery (his ninth shunt revision), and developed symptoms that might have been hydrocephalus from the shunt malfunction — but that turned out to be signs of progressive, metastatic disease. Ty was diagnosed with lepto-meningeal enhancement, and we were out of options. Ty started at-home hospice care on September 17, and passed away peacefully in our arms on October 17, just weeks after his fifth birthday.

Our family is incomplete and our hearts are broken, but we are also filled with peace and gratitude for having had the opportunity to love Ty as long as we did.  And we are thankful to his doctors for prolonging that gift.

We are dedicated to saving the next Ty Campbell by raising funds to support research specific to childhood brain and spinal cancer.  Although a life-saving breakthrough may still be years in the making, we strongly believe researchers are nearing a tipping point and amazing breakthroughs are on the horizon that will give children with cancer safer, more effective treatment options.