This nurse knew there were risks in having brain surgery – but when she learned the risks of NOT having it, she put her faith in Dr. Souweidane.

Sarah DiLuigi wasn’t used to getting headaches. The healthy, active 29-year-old trauma nurse had never been prone to migraines, or sinus trouble, or even many tension headaches, so she thought it was strange when she started feeling pain and pressure in her face and head. The headaches left her feeling tired and nauseated – certainly not what she needed in her work in an intensive care unit.

She told her primary care physician about the headaches during her annual checkup; suspecting allergies, he suggested over-the-counter antihistamines and pain relievers. When those didn’t work, the doctor suggested she have a CT scan of her sinuses and head.

The results of the CT were shocking – Sarah had a benign brain tumor called a colloid cyst at the part of her brain called the foramen of Monro, a channel that connects the brain’s ventricles and allows cerebrospinal fluid to circulate. Colloid cysts are rare, so even though she’s a nurse, Sarah had never heard of them before. “I got the news at work and happened to be sitting next to a neurologist,” she says. “He was able to pull up my scan and show me exactly what that meant and looked like.”

Sarah learned that while colloid cysts are benign, they can do more than just cause headaches. A cyst that starts to grow can block the flow of cerebrospinal fluid, leading to hydrocephalus or even sudden death – an extremely frightening risk. On the other hand, a colloid cyst may never grow at all – and Sarah found the prospect of potentially unnecessary brain surgery to be daunting. How to evaluate the risks and rewards of surgery?

A friend recommended Sarah make the 25-mile trip from her home in Berwyn, Pennsylvania, to downtown Philadelphia to see a neurosurgeon. “He was nice, but he didn’t have much experience with colloid cysts,” says Sarah. “He didn’t believe my headaches were caused by the cyst, and he told me to try and forget about it.”

In search of a second opinion, Sarah went to another neurosurgeon – but he also had little experience with colloid cysts. That neurosurgeon recommended a watch-and-wait approach, with surgery only if the cyst started to grow. “He said that at some point I would need to deal with it, but he wasn’t sure when that would be,” says Sarah.

For the next eight months Sarah’s headaches persisted and her anxiety mounted. Terrified at the idea of having brain surgery to remove the cyst, she was equally afraid of doing nothing. “I was constantly worried that the tumor would grow and potentially end my life,” she says. “I felt like I was just waiting around for something to happen, and I had lost a sense of control over myself.”

Sarah and her husband, John, planned getaways to Greece and Aruba to help relieve their stress, but traveling only made Sarah panic more. “Wherever we went, I was frantically looking up the closest and best hospitals,” she says. “I felt like I couldn’t do certain things unless I cleared it with my neurologist. I didn’t like always feeling like there was something holding me back.”

Sarah finally decided to seek a third opinion, this time from a doctor who was an expert in colloid cysts. She found an online support group for people with colloid cysts, and she asked for recommendations. That’s when she learned about Dr. Mark Souweidane at the Weill Cornell Medicine Brain and Spine Center. “People had nothing but positive things to say about him,” she says. “When I started researching him on my own, I learned what an accomplished neurosurgeon he is.” 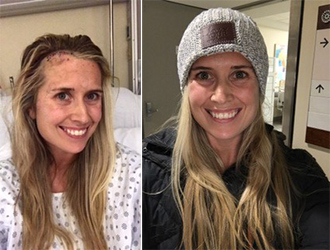 The morning after surgery (left) Sarah was smiling, relieved it was all over. Two days later (right) she left the hospital for home.

Sarah came to New York and met with Dr. Souweidane and his physician assistant, Therese Haussner, and says she knew immediately that she was in the right place. “Colloid cysts are one of his specialties and he quickly put my mind at ease,” she says. “He told me he did not think my cyst was causing any immediate harm, but that at 7 mm it was a decent size, and could eventually lead to adverse outcomes.”

Dr. Souweidane explained the minimally invasive endoscopic procedure he uses to remove colloid cysts – it takes just a few hours to perform, with minimal risk and a quick recovery time, and he’s done more than 100 of them. Sarah made up her mind right then and there to have the surgery. “He explained it with such confidence,” she recalls. “I knew instantly that I wanted to have the cyst removed by Dr. Souweidane.” She made the decision and scheduled the surgery.

Although she works in a hospital, Sarah had never been a patient in one before, and the situation terrified her. “As an ICU nurse, I have seen a million things go wrong,” she says. “But I was easily able to calm my nerves when I thought about how experienced Dr. Souweidane and his team were. I knew I was in the best hands.”

The surgery went smoothly, and Sarah was soon in the recovery room talking to her family and asking Dr. Souweidane questions. “I felt so relieved when it was over, and surprised by how good I felt,” she says. “I kept waiting for the time I might feel worse, but that never happened.”

Sarah returned home the next day and settled in for a recovery period.  “I was tired and had some pain at the incision site, but that was it,” she recalls. The incision, which was about an inch and a half long, healed after a few weeks. Best of all, her headaches were gone.

After six weeks of recuperation at home, she went back to work. “I had initially planned on taking eight weeks off, but I was feeling so good I decided to go back early,” she says.

Sarah now has a new appreciation for life, as well as a new perspective on work. “I definitely feel like I can sympathize with patients more,” she says. “I know the feeling of uncertainty before surgery, and how it can be debilitating at times.”

As for making the decision to have her cyst removed, she couldn’t be happier about it. “I am so grateful to Dr. Souweidane and his amazing medical team,” she says. “Now I feel like nothing is holding me back.”