Cheering for Caitlin: A Patient Story

Caitlin Downing was not given the gift of many birthdays — she was only five years old when her life was claimed by the deadly brain tumor known as DIPG. In her short life, she played an important role in the quest to vanquish this terrible tumor, and her birthday, May 17, has become DIPG Awareness Day. Read Caitlin's story below, and visit the Children's Brain Tumor Project web site for more information about the important research our scientists are performing to find a cure.

In January 2012, Caitlin Presley Downing was a charming, happy Florida four-year-old — when one day her preschool teacher noticed her turning her head sideways to see the blackboard. Before her mom could even get her to the eye doctor, Caitlin was losing her balance, walking into walls, and falling down. Within just a few days of the first symptoms, Caitlin was diagnosed with diffuse intrinsic pontine glioma (DIPG), a uniformly fatal brainstem tumor.

With a prognosis of about a year’s survival time, Caitlin underwent a course of radiation treatment intended to shrink the tumor and reduce the symptoms. Her parents understood that the radiation was not a cure, but a way to buy time until the tumor would inevitably regrow. It worked — the tumor shrank, the symptoms abated, and Caitlin seemed like her old self again — but the clock was ticking. Doctors know that when DIPG returns, it is more aggressive than it was before. And Caitlin’s parents knew that no child had ever survived this kind of tumor.

In April, Jeff and Denise Downing flew to New York to meet with Dr. Mark Souweidane, who had only recently received FDA approval to begin a new clinical trial for DIPG. The trial was a Phase I trial, meaning it tested only the safety of a new procedure. There was no expectation that it would cure Caitlin’s tumor, but there was hope that she might receive some benefit from it. And there was the knowledge that, even if it couldn’t help Caitlin, this trial held out hope for future children diagnosed with a pontine glioma. (Find out more about the clinical trial.)

"No one wants to have their child be the first in any experimental trial," said Denise Downing.  “But Caitlin had no chance of survival — zero — so we decided to take the chance. If there were even a glimmer of hope for her in this trial we had to try it.” 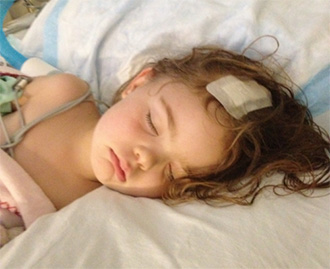 On May 1, shortly before her fifth birthday, Caitlin became the very first patient treated in the trial. Dr. Souweidane slowly and painstakingly infused a radioactive drug directly into Caitlin’s tumor, bypassing the blood-brain barrier and taking on the tumor directly. By May 8 Caitlin was discharged and returned to Florida.

Over the next few months Caitlin and her mom returned to New York countless times for ongoing follow-ups. She looked and felt fine, but everyone walked on eggshells, worried about what the future would bring, worried about what might be brewing unseen in her head.

An MRI scan in September confirmed what Dr. Souweidane had predicted and the Downings had hoped: The new procedure had caused the death of tumor cells and tumor activity where the infusion had been performed. As Denise Downing put it, “It works. Yes, it does, it works.” 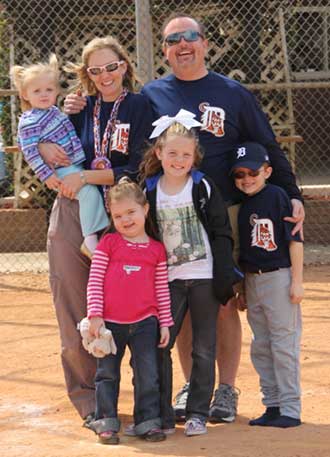 But there was no joy in that news, as the MRI also showed regrowth of the tumor in a new location. By November a new scan showed significant progression of the disease, and Caitlin started hospice care at home. Caitlin passed away on November 11, just 10 months after being diagnosed.

“I wanted a miracle for my child,” says Denise Downing. “But all the parents of the 250 children who were diagnosed with DIPG this year wanted a miracle too, and they fought as hard as I did. For the last forty years, every parent of every child with DIPG has wanted and fought for a miracle cure, so that their child would survive.”

Over the last half of the twentieth century, many cancers saw dramatic rises in survival rates. DIPG’s survival rate has not changed; it remains at zero. Dr. Souweidane’s trial, along with the complementary genomic research his colleague Dr. Greenfield is conducting, is at the heart of the Children’s Brain Tumor Project of the Weill Cornell Pediatric Brain and Spine Center, where the goal is to create a survival rate and thereby create hope for parents and their children.

“I believe Caitlin was a part of some medical miracle-making,” says Denise. “It’s the right treatment, and it works; I saw the scans. But it has to be fine-tuned. I’d hoped we would be able to keep Caitlin alive long enough to work through some of the fine-tuning, and get a full-blown miracle.”

Dr. Souweidane is hopeful that this trial will provide some answers to the mystery that is DIPG. But he's certain of one thing: No family was ever braver or more dedicated than the Downings in their quest for hope for Caitlin. "In nearly two decades of being a neurosurgeon, I have seldom if ever been moved by such emotional investment and trust with patient and parent," he says. "The outlook without treatment was predictable, but they chose the unpredictable path. No child had previously undergone this specific type of therapy, and the parents and I had no way to fully understand the potential risk. I so wish she had survived, not for the self-fulfillment, but for her parents and for her sisters and her brother."

Find out more about the Children’s Brain Tumor Project

Dr. Souweidane’s Phase 1 Trial Findings Published in Lancet Oncology (These are the results of the clinical trial that began in May 2012 with Caitlin Downing.)