Cruising Away From a Colloid Cyst

Terry DeLeon, a teacher in Westchester County, New York, was staying late after school one night preparing for a national board certification. The grade-school teacher had just started a new job teaching high school English as a Second Language, and the deadline for certification entries was fast approaching.

Suddenly she felt the left side of her face go numb and pressure mounting in her head. “I felt dizzy and short of breath, like I was going to pass out,” she recalls. “My father had had two massive strokes, so I panicked.”

She quickly got herself to an urgent care facility, where doctors assured her she wasn’t having a stroke. More likely, they said, she was hyperventilating due to stress. Still, they urged her to get further tests just to be sure. So the next day Terry had an MRI — and the results were shocking. “The doctor told me that I had a large colloid cyst in my brain and that I needed to see a specialist,” she says.

Terry had never heard of a colloid cyst — a rare and benign fluid-filled sac deep within the brain’s third ventricle. Terrified, she called her sister-in-law, a social worker, who reached out to colleagues to get recommendations. That’s when Terry first heard about Dr. Mark Souweidane, a neurosurgeon at Weill Cornell Medicine and NewYork-Presbyterian. They discovered that this world leader in endoscopic removal of colloid cysts — a minimally invasive approach with much less risk and faster recovery times than open surgery — was just one hour away from their home. “My husband, Marco, looked him up online and saw how qualified he was,” says Terry. “He has over twenty years of experience removing these kinds of cysts.” 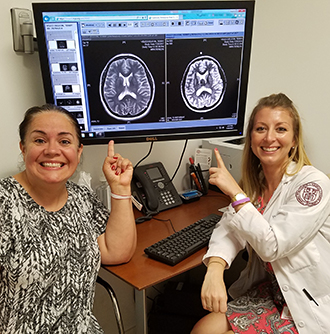 Terry quickly scheduled an appointment, and she and Marco met with Dr. Souweidane’s physician assistant, Therese Haussner, first. “I felt comfortable the moment she stepped into the office,” says Terry. “Therese has a very kind and gentle spirit and a smile that tells you everything is going to be okay.”

Terry was struck by Dr. Souweidane’s confidence and expertise, and grateful for the time he spent carefully explaining her options. “He explained what kind of tumor it was and that they didn’t know how or why they grow. He said mine was the size of a ping-pong ball — the biggest he had ever seen,” she says. Most reassuring was the news that this was not cancer, and that surgical removal is curative.

Using her MRI, Dr. Souweidane showed Terry the path he would follow in her brain to remove the cyst using an endoscopic lens and instruments of no more than 2 mm (less than half the size of a grain of rice) all through an opening in her skull the diameter of a dime. Terry asked him if surgery was really necessary, given how long she had probably had the cyst. Dr. Souweidane cautioned her that most colloid cysts at the time of diagnosis are half the size of hers; cysts of that size are known to put patients at risk of sudden death. “He had me at ‘sudden death,’” says Terry.

Surgery was scheduled for July 29, 2016. But there was one snag: Terry and Marco were planning on taking a cruise to the Caribbean on August 13 with a group of 30 friends, celebrating the retirement of a beloved local priest (and also celebrating their own 26th wedding anniversary). It was a once-in-a-lifetime trip, with tickets purchased months earlier. Would she still be able to go?

It would all depend on how smoothly the endoscopic surgery went, Dr. Souweidane explained. With any colloid cyst resection, there’s always a small chance that endoscopic removal won’t work. In addition, cysts as large as hers are seldom removed with an endoscopic technique. If the endoscopic technique was not possible, he’d have to perform a more traditional surgery. That would mean removing a portion of Terry’s skull and creating a substantially larger path through her brain — a procedure that takes longer, is associated with greater risk, and requires a longer recovery period. “I was praying, please God — I hope they can remove it endoscopically,” says Terry.

Terry was understandably nervous the day of the surgery. She arrived at the hospital with her husband, her three children, her sisters, and sisters-in-law — all there to offer support. Dr. Souweidane met them all warmly and reassured them that Terry would be fine.

And she was. Waking up after surgery in the ICU, she was relieved to learn that it had all gone according to plan with no complications. In just a few hours, Dr. Souweidane had removed the entire cyst endoscopically, just as she had hoped.

Those first moments after surgery were disorienting, but she quickly started coming to and feeling better. The tubes and bandages were removed, revealing a few staples right by her hairline, just as Dr. Souweidane had said. Before she knew it, she was on her feet and feeling fine. “I was surprised because I thought I’d be more incapacitated,” she says.

In just three days Terry was already home. Family and friends visited and called to check in on her —Therese included. Except for feeling a little pressure in her head and soreness around the incision, which is normal, Terry felt great. 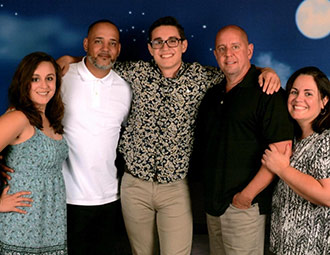 Ten days after that she and her family left on their cruise — and they had the time of their lives. “All Dr. Souweidane wanted me to do was to stay out of the water and the sun, and to keep my incision covered so there would be no scarring,” she says.

Later that fall, Terry (who had finished her national board certification exams before her surgery) found out she had passed! One of the first people she called to share the news with was Therese. “I wanted her to know how important her help and support had been for me,” she says.

Looking back, she marvels at what a strange turn life took. “I could say that the national boards saved my life,” says Terry. “Because of the stress they caused, doctors found the tumor in my brain. It was all a big accident.”

She is so grateful for the care she received at Weill Cornell Medicine and feels lucky that an internationally recognized leader in endoscopic neurosurgery was so near. “I trusted that everything was going to be okay — and Dr. Souweidane and Therese had a lot to do with that. Their level of experience helped put my mind at ease. I’m so glad I entrusted myself to them.”

Watch the Video: Endoscopic Resection of a Colloid Cyst