Cole Sparks was never one to complain. The active 12-year-old Long Island boy lived and breathed lacrosse, and his hard work had earned him a place on the local youth travel team. His proud parents, Chris and Marisa, describe him as “stoic, competitive, and a leader”  — all qualities that helped him thrive on and off the field. So when Cole started complaining about a pain in his hip last summer, his parents knew they should get it checked out. Little did they know what a frightening journey they were about to begin, but thanks to top neurosurgeon Dr. Jeffrey Greenfield and his team at Weill Cornell Medicine and NewYork-Presbyterian, the story has a happy ending.

Chris and Marisa have a friend who is a physical therapist, and when they mentioned Cole’s complaint to him, he took a look at the boy and immediately saw the telltale spinal curve of scoliosis. A healthy spine looks perfectly straight when viewed from front or back, but scoliosis causes it to curve from side to side. Many cases emerge in the pre-teen or teen years with no apparent cause — this is called Adolescent Idiopathic Scoliosis — and the curvature can range from mild to severe, with many mild cases requiring no intervention at all. In moderate cases, teens are often prescribed a brace to prevent the curve from worsening as they grow.

After visiting three different orthopedic surgeons for advice, Cole was fitted for a brace that he had to wear all day. But something still just didn’t feel right. One day as he was doing drills with his lacrosse team, Cole took one shot at the net and suddenly fell down crying. “I knew something more was very wrong,” recalls Marisa. “I went back to tour medical team and asked for an MRI. The results of that scan were relayed to Marisa and Chris in a phone call that left them speechless.

Cole was diagnosed with a Chiari malformation, but even more frightening was that he was found to have a huge cyst, called a syrinx, within his spinal cord, spanning the entire length of the spine. Needless to say, his doctor recommended he see a neurosurgeon right away.  “We left there with our heads spinning,” says Marisa, “and I immediately went home and researched every website. I’d never heard of a syrinx or Chiari malformation!” 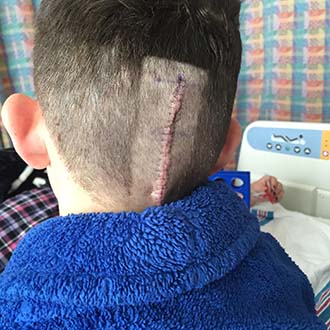 Chiari malformation is a structural abnormality at the base of the skull, where a large opening accommodates the connection between the brain and spinal cord — a connection normally bathed in cerebrospinal fluid (CSF). In someone with a Chiari malformation, the part of the brain called the cerebellum is pushed down through this opening, creating pressure on the spinal cord and restricting the flow of CSF between the head and spine. Chiari is often accompanied by a syrinx, an elongated cyst in the spinal column. Cole had both and the cyst was quite large.

The diagnosis set off a whirlwind tour of doctors specializing in orthopedics and neurological surgery. “Cole went to five or six different doctors, sat through numerous X-rays and MRIs,” Chris sighs. “He was just feeling... done.” Knowing that Cole needed treatment, Marisa and Chris settled on a surgeon and set a date with him for surgery. But as doubts crept in, they cancelled the appointment.

“Sitting in that office, I remember that something didn’t feel right deep down, and I was thinking that I was not going to let him operate on my son,” Marisa recalls. Fatigue had set in, and everyone was tired of going through doctors, but Marisa persevered to try and find the right one for Cole, one who wouldn't leave her with those doubts. She sat at the computer for hours, researching each and every doctor she found who claimed to specialize in Chiari malformation. She reached out to one whose background gave her a good feeling — Dr. Jeffrey Greenfield, founder and director of the Chiari CARE program at Weill Cornell Medicine.

“He responded within hours,” Marisa joyfully recounts. “We had an extensive email trail back and forth.” Both parties were excited to meet; Dr. Greenfield’s administrative assistant set up a meeting for the very next day.

The Sparks family was in good hands: Dr. Greenfield evaluates hundreds of Chiari patients each year and is internationally recognized in the field for his outreach, education, and attention to patient care. “Every Chiari patient is unique, with a different combination of symptoms and physical abnormalities, and surgery isn’t the answer for everyone,” says Dr. Greenfield. “Cole’s case was complicated by the size of his syrinx, but in meeting with the family and examining Cole and his scans, I was confident my team could help him.”

The gut feeling Marisa had when she had found Dr. Greenfield online was reaffirmed when the neurosurgeon walked in the door. “He sat and listened to Cole and us, answered all the questions we had, and didn’t push surgery,” she recalls. “After an hour with Dr. Greenfield, both Cole and we knew that he was going to be the one to operate on my son.”

Dr. Greenfield performed the decompression surgery — in which a piece of the skull and spinal column are delicately removed and reshaped, followed by re-establishing the flow of brain fluid around the brain and the spinal cord. This surgery, one that he has become internationally renowned for performing in children and adults, allows the brain more room at the base and relieve pressure on the spinal column but also is designed to simultaneously allow the syrinx to collapse and the spinal cord to recover.  Just five days after Cole’s 13th birthday he woke up from surgery to a deluge of get-well cards and gifts from his teammates. He managed a big smile — his team had his back. 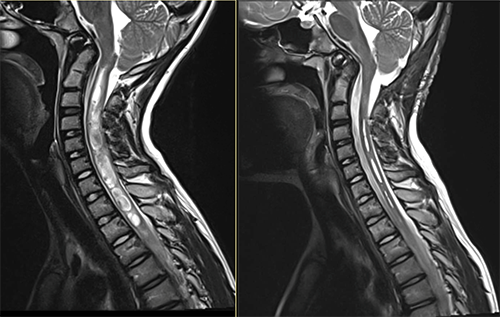 Cervical MRI showing huge cyst in the spinal cord before surgery (left). Less than three months later (right), the cyst is almost completely resolved and Cole is playing lacrosse at a phenomenal level.

His recovery defied expectations. To his therapists’ amazement, he was up and walking less than 24 hours post-op. “I knew he’d be fine,” says Christopher, Cole’s older brother. “If anyone could handle it, it’s Cole!” The freshly minted teenager did everything his therapists asked of him and never backed down or felt sorry for himself.

Five days after surgery Cole played a game of catch with his dad. A week after the surgery, he joined a team practice to provide moral support. Cole’s energy was relentless — he set himself a goal to play in a tournament just eight weeks after his surgery, when his travel team would be playing on the fields of Duke University and the University of North Carolina. True to form, Cole met that goal (although his family admits that they didn’t tell Dr. Greenfield about it until their three month follow-up!)

“We drove the nine hours and let him play one game on each field — he deserved that,” says Marisa. Since then, Cole has played non-stop; he was the leading goal scorer for his school lacrosse team in the spring of 2018!  The interval scans have shown a dramatic improvement in the syrinx. All Cole's doctors expect that will allow his scoliosis to stabilize or improve, but only longer-term X-rays will confirm this.

As Cole puts the experience behind him and moves on, Marisa reflects on the long journey and how thankful they are for Dr. Greenfield’s help. “When all you hear about is brain surgery, decompression, recovery time, and downright scary words and terms,” she says, it was extremely stressful. “But in the end it was all okay,” she adds. “Dr. Greenfield told us from day one that Cole was going to be okay and he has proven that. We’ll forever be indebted to him!”