By Joe and Christine Pecoraro

Our son Caleb had always been a healthy, active, and extremely happy little boy.  He loved playing baseball, running around on the playground, and hanging out with his older brother, Joey. But just after Caleb turned four he started having severe headaches — so severe at times that he would vomit, leaving him on the couch to rest for hours, even days at a time. We didn’t know it yet, but these symptoms were the start of the most challenging times of our lives — and it’s all thanks to Dr. Jeffrey Greenfield and the staff at Weill Cornell Medicine that we had a happy ending to this story.

It felt like a blur. After Caleb's pediatrician ordered an MRI to find the cause of his symptoms, we received heartbreaking news: there were several abnormalities in Caleb’s skull, brainstem, and spine. They started telling us about conditions we had never heard before: Chiari malformation, basilar invagination, platybasia, and most scary: brainstem compression. The brainstem controls almost all of the body's basic functions, from breathing to swallowing, so this was terrifying to us. Our takeaway from all of this was that Caleb had a rare condition – more accurately a combination of rare conditions – and that he needed surgery right away.

The chief neurosurgeon at the local hospital in Florida told us that Caleb’s condition was so rare, and the surgery so complex and invasive, that he didn’t think his team was experienced enough to attempt it. He reached out to neurosurgical departments at surrounding hospitals, and around the region, but they all declined to take on Caleb’s case. It was just too difficult, with abnormalities in both the front and back of his spine, and most surgeons weren’t trained to deal with a spine already partially fused to the skull. The local doctor said there was only one thing we could do: find a neurosurgical team that could handle Caleb’s condition, no matter where that team might be.

We were ready to do anything — and with the local neurosurgeon’s help, we searched for the best doctor to treat our son’s condition. Everything in our research pointed to Dr. Jeffrey Greenfield and his team at Weill Cornell Medicine in New York City. We sent him all of Caleb’s records, and we were thrilled when he said he would meet Caleb and help strategize a plan! The surgery would have to be done in stages, but we would be able to get started soon. Most importantly, we found a team that not only new how to handle the toughest cases, but also made Caleb feel calm and comfortable. 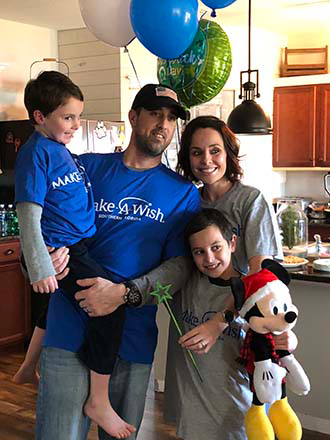 Caleb and his family

This was the best news we had heard in a while! For once it seemed like we could see the light at the end of the tunnel. That feeling didn’t last — the time came soon enough, and the flight to New York for Caleb’s first surgery was filled with anxiety.

It was a relief, albeit a temporary one. Four months after his surgery, Caleb was admitted into an ICU back home in Florida for headaches, vomiting, and a low heart rate. The doctors thought he had swelling around his brain, but Dr. Greenfield reviewed the MRIs remotely from New York City to see there was no swelling. However, the news wasn’t all great: the second surgery which we knew he would need eventually to stabilize his skull and spine would have to be done sooner than they had hoped, as the brainstem was being compressed by a bone at the top of his spine. This meant that Caleb had to wear a neck collar until his next surgery.

Our community rallied around us, and Caleb’s grandparents helped us tremendously by starting a GoFundMe page and by taking care of Joey while we were away. Family, friends, and people we didn’t even know would help us by raising money and offering up places to stay while we were in New York. The community and different organizations reached out to us to help; we felt so blessed. 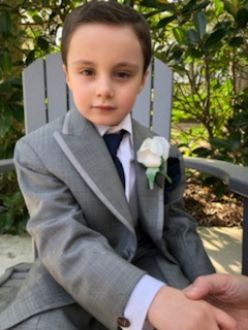 Before we knew it, we were back on the plane for another consultation with Dr. Greenfield to plan out the next steps and to meet the team of surgeons who would help him with Caleb’s next two operations: Drs. Baaj, Kacker, Schwartz, and Otterburn. It felt even more overwhelming because this was the surgery that would give our boy a normal life.

The surgery took place in two parts. First, the team of surgeons would go through the back of his skull where they had operated previously and delicately secure his skull to the top of his spine. Then, they would turn Caleb over and, using small cameras inserted through his nose, remove the top of his spine where it was compressing his brainstem. It was an emotional marathon: the 12 hours of surgery felt like a week as we waited in complete anguish.

Through it all, the surgical team was extremely compassionate, answered all our questions, and provided us with the assurance we needed. Dr. Baaj was the first to come through the doors — he told us the first half of the surgery was a big success and that they saved our son’s life. That statement will be etched into our heads forever. Just hearing those words was a huge relief as we broke down and cried. One by one, all the other surgeons came out and spoke with us. From that moment, we knew our boy was going to be okay. The team worked so hard to give Caleb a normal life.

After 10 days in the ICU and a month of recovery in New York City, Caleb was finally able to go home. Though he had restrictions and limitations, he returned to school through a program called Hospital Homebound. He would have a half day in school with mom present, and his teacher would come after school to teach him at home after resting. As he recovered further he began attending school more often without his mom, and his teachers looked after him.

Caleb was also a Make-a-Wish child and our family met another family who had a young son with Chiari. We spoke the journey our children went through and it was a blessing to hear about how strong our boys truly are. The boys were both amazed they had the same incision in their head!

Caleb’s journey was a long one, but he’s a fighter. He did everything the doctors needed him to without a struggle. Our son is a true miracle and he makes us stronger. We’re so proud to be his parents. And we’re so glad for the neurosurgical experts at Weill Cornell Medicine and NewYork-Presbyterian who not only had the rare team of experts to tackle such a complicated the case, but also were able to ensure such successful results!