A Firefighter Fights Back

Alex Hornig, of Ridgefield, Connecticut, is no slouch. He’s a professional firefighter for the nearby Milford Fire Department as well as a flight paramedic for North Country Life Flight in Saranac Lake, New York, and a per diem paramedic with Westchester EMS. For relaxation he enjoys wakeboarding, skiing, kayaking, sailing, and hiking. So when back pain threatened to limit his activity, he knew he needed to take action. With the help of Dr. Roger Härtl, his active life and career were brought back from the brink.

The problem seemed minor at first, starting with the occasional back spasm. “At first, my symptoms presented as lower back spasms that would last a day or so and resolve with ice,” Alex says. “Over time, the simple episodes of spasm took more time to resolve and the pain became more intense. They started to really interfere with work and leisure activities.”

Alex managed as best he could, but after more than two decades he was no longer dealing with simple spasms. “It became harder to perform the essential functions of a firefighter without pain,” he says. “I couldn’t sit in a car for long trips without frequent stops. I couldn’t sit in a theater for my children’s graduations and had to stand in the back of the auditorium for the entire event.”

Finally there came the day when Alex couldn’t ignore his condition any more. “I could endure the pain and inconvenience,” he says, “but the tipping point came the day I began to lose sensation and strength in my left leg. As a paramedic for twenty-five-plus years, I knew from training and experience these were ominous signs.”

Alex consulted a local orthopedic physician, who showed him that he had a compression of his spinal nerves at the L5/S1 level (that’s at the very bottom of the lumbar spine, where it meets the sacrum and iliac bones). He also had a ruptured disc above that, at the L3/L4 level, which also compressed the nerves and compounded his symptoms. Not wanting to undergo surgery, Alex initially opted for epidural injections into his spine to decrease the swelling and relieve the pressure on his nerves.

“While I had some relief, I knew that the time had come to seriously consider surgery,” says Alex. “I had to save my quality of life, my firefighting career, and I wanted to attain my goal of becoming a flight paramedic.” Alex knew that only surgery would offer him the longer-term results he needed.

Alex knew Dr. Roger Härtl by reputation, from two separate cases. “It’s a small world — he’d helped my uncle, Dr. Howard T. Bellin, and I always respect his medical opinion and recommendations,” Alex says. “But the first I heard about Dr. Härtl was in regard to his care of FDNY firefighter Eugene Stolowski. His survival and recovery were an inspiration to me. The extent of his injuries, combined with Dr. Härtl’s skill gave me great hope that I could return to active duty with my department.”

Eugene Stolowski suffered a severe spinal injury in the 2005 “Black Sunday” fire in the Bronx, and Dr. Härtl became one of that year’s Medical Marvels in New York magazine for his surgical skill in not only saving his life but getting him back on his feet (see news story). “When I had my first consultation with Dr. Härtl, I was immediately struck by how modest he was about with what he did for the Stolowski family,” Alex recalls. What Alex didn’t know was how serious his own condition was. 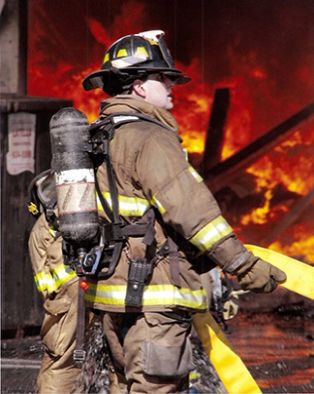 “When I first saw Alex, it was hard to believe that he had lived with this condition for so long,” says Dr. Härtl today. “What he had been experiencing was a very slow compression of the nerves. He also had nerve compression from a herniated disc on the left side at L3-L4. Gradually, the nerve compression could have led to weakness and difficulty moving his legs. So when he started losing sensation in his leg, that was when things were becoming much more serious.”

Despite the severity and duration of nerve compression, Dr. Härtl was confident about Alex’s prognosis. Alex would need an L5-S1 fusion with decompression and cage placement, and a left-sided L3-4 microdiscectomy, but Dr. Härtl is proficient in that procedure, with hundreds of such procedures under his belt. In addition, Dr. Hartl is one of a small group of surgeons proficient in performing these surgeries in a minimally invasive way, allowing for decreased pain and faster recovery.

“Spinal decompression surgery has come a long way since Alex first had symptoms almost twenty-five years ago,” says Dr. Härtl. “The technologies that are available now allow us to operate more effectively. Nothing is ever guaranteed, but we always strive to make sure that our patients have the best odds of a good outcome. There was no doubt in my mind that he could return back to full duty in six months, no problem.”

His confidence was contagious, and Alex agreed it was time for surgery. “I could tell there wasn’t even a question in his mind that I would reach my goal,” he says. “His confident demeanor and his earnest assessment of my condition gave me just the push I needed to proceed with surgery under his care.”

“When a patient like Alex undergoes a lumbar fusion, we typically go the minimally invasive route,” says Dr. Härtl.

On April 29, 2016, Alex was brought into the operating room with one desire. “Finishing my firefighting career on my own terms rather than retiring because of disability was always my ultimate goal,” he says. “Putting my health and career in Dr. Härtl’s hands gave me the best chance to achieve that goal.”

Alex’s recovery was challenging, but his mentality and willpower gave him the strength to proceed. “I put myself in the mindset that Dr. Härtl had done his job. Within 48 hours post-op I was able to walk a mile on my treadmill. The next day it was three. When I began physical therapy at six weeks, I did it on the exact day with my physical therapist,” Alex says. “We set specific firefighter fitness and recovery goals to make me feel confident when I would eventually return to full duty. My key was having an intelligent and focused process with general strength and firefighter-specific goals.” On December 9, 2016, about seven months after the surgery, Dr. Härtl cleared Alex to go back to work.

Alex is still on the job and is grateful for Dr. Härtl’s care. “Putting myself in his care was a positive career and life-altering decision,” he says. “I can’t emphasize enough that having a positive, active, and dedicated attitude towards your own personal recovery will yield the most positive outcome.”