Claire Hennessey is a “flyer” — that’s the cheerleader at the top of the pyramid, the one who gets tossed into the air, the one who performs all the daring moves that elicit gasps from the audience. During practices, that also makes her the one who sometimes falls, or gets dropped, as the squad works on perfecting its routine.  These mishaps are a big reason why cheerleading was recently named as the single most dangerous sport for women.

When Claire took a fall during a practice at the beginning of the school year, an ambulance whisked her off to her local emergency room for a suspected concussion — Claire is only 14, but this would be the second concussion of her cheerleading career. CT scans almost always look normal in a concussion, but Claire’s scan showed something more ominous than doctors were expecting. Fearful that the anomaly they saw was evidence of bleeding on the brain, doctors in the local hospital in a Chicago suburb immediately transferred her to a larger hospital in the city for evaluation and possible surgery.

“I was sure happy to find out there was no brain bleed,” says Claire’s mom, Joey. “The bad news was that the spot on the CT scan was a colloid cyst.”

A colloid cyst is a relatively rare condition, not a brain tumor but a fluid-filled sac that grows in the third ventricle, one of the chambers of the brain. No one really knows when or why a colloid cyst forms, but it’s usually diagnosed in older patients who develop headaches or other neurological symptoms as the cyst grows. In younger individuals, like Claire, they are more typically discovered as hers was: incidentally during a scan performed for another reason. 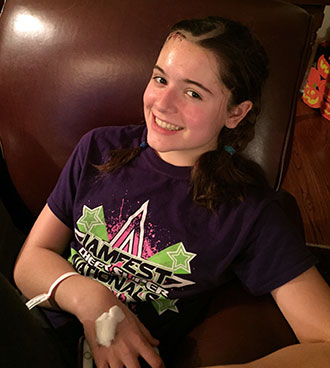 Just one day after the surgery, Claire was feeling well.

The confusing thing for Claire and her parents was that there was no clear-cut answer on what to do about it. Colloid cysts are benign, but they can block the normal flow of cerebrospinal fluid and cause hydrocephalus, or a swelling of the ventricles of the brain. If the cyst suddenly blocks the brain structure called the foramen of Monro, the result can be acute hydrocephalus, causing an abrupt and severe headache and, in rare cases, sudden death.

Claire didn’t have any signs of hydrocephalus, so some doctors advised watchful waiting, with monitoring of the cyst over the years. Others warned that if the cyst were not removed, she should always be alert for any sign of sudden headache with vomiting, and go directly to the nearest emergency room if she experienced those symptoms. Some even advised against going to a college far from home, recommending that she stay nearby in case of emergency.

That wasn’t the kind of future the Hennesseys wanted for Claire — or that Claire wanted for herself — so they were inclined for her to have the surgery. Ironically, though, the hydrocephalus that can make the cyst more dangerous also makes endoscopic surgery easier, since the neurosurgeon has more room in which to maneuver the endoscope.

In Claire’s case, with no hydrocephalus, some neurosurgeons evaluating the cyst were concerned about attempting endoscopic surgery. Without the enlarged ventricles easing the way for an endoscopic approach, the surgeons were inclined toward open brain surgery — a craniotomy, or a complete removal of part of Claire’s skull to allow access to the cyst. That was understandably worrisome to both Claire and her parents. 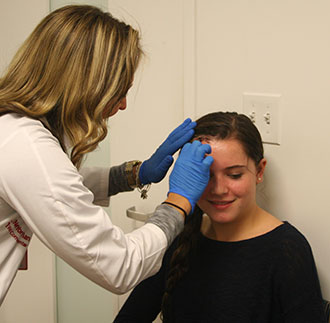 “The thing that scared me was that most neurosurgeons haven't done a lot of these endoscopically without hydrocephalus,” says Joey Hennessey.  “Claire’s cyst was quite large at 1.3 centimeters, and that made me even more nervous. I really wanted to find a neurosurgeon who had done this many times, endoscopically in patients without hydrocephalus, so I could feel more confident.”

The Hennesseys started doing some research and found a Facebook group of colloid cyst survivors, which is where they first learned about Dr. Mark Souweidane, who has done more endoscopic colloid cyst resections than any other neurosurgeon in the world. Dr. Souweidane concedes that the endoscopic approach is more difficult in a patient without hydrocephalus, but says the risks of open brain surgery far outweigh any difficulty with the endoscopic approach.

“In the twenty years since we started doing endoscopic resections here, I’ve never gone back and recommended open surgery instead,” says Dr. Souweidane. A craniotomy always remains a distant possibility — if the endoscopic approach turns out to be impossible, patients know he may have to do open surgery — but in 20 years he’s never had to do it.

“I was pretty nervous about that,” admits Joey Hennessey. “After all we’d gone through, I didn’t want Claire to end up having the open surgery. But Dr. Souweidane seemed very confident, and that made us feel very confident in him as well.”

As for Claire, she says she just wanted to get it all over with. “By the time we got here to New York to actually have the surgery, it had been two months since I’d been diagnosed,” she says. “This all happened on the third day of school, and it was October when we met Dr. Souweidane, and then November when I had the surgery.”  The teenager was anxious to get back to her friends, to school, and to her life back in Illinois. 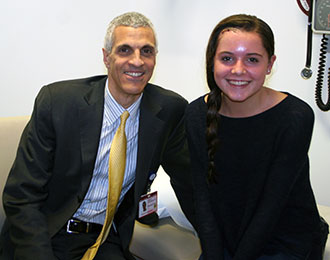 Fortunately the surgery went well and Claire was feeling fine the next day — a little sore at the incision site, and a little sleepy from the anesthesia, but otherwise fine. She was discharged from the hospital the day after the surgery. A few days after that, when she came in for a post-operative visit, she felt great except for a slight residual headache.

The stitches are high on her forehead, in a small area that had been shaved for the procedure — once her hair grows in it’s likely that nobody will notice the scar at her hairline. Dr. Souweidane says the skin will be completely healed in six weeks, and that Claire has no real limitations (except swimming) in the meantime.

Claire says she probably won’t be cheering this year — the squad has already learned the routines for the upcoming competitive season and she feels she’s missed too many practices — but she plans to be back in uniform for her sophomore year next year. She concedes that she’ll probably ask for a different position when she goes back to the squad — she may be through with flying, at least for now.  But with this procedure behind her and a clean bill of health, the sky’s the limit for her.