Harry and the Helmet

Thanks to top-notch surgical skills from Dr. Mark Souweidane and the love, patience, and a great sense of humor from his parents, Harry's craniosynostosis is a thing of the past.

To Sara Finne and her husband Ron Cornwall, everything about their newborn son was adorable — even his slightly misshapen head. Little Harry had chubby cheeks and protruding forehead, but was otherwise healthy and normal. Sara planned to ask her pediatrician about it at Harry’s one-month checkup, but before she could even bring it up the doctor noticed something else — the “soft spot” on the top of Harry’s head was hard and closed. “You should see a neurologist,” the pediatrician suggested. “It could be craniosynostosis.”

Sara and Ron had never heard of craniosynostosis, a condition that occurs when the bones in the skull fuse prematurely. They began researching it in earnest, worried that Harry might have neurological problems, and they got to the neurologist as soon as possible.

Harry’s brain was fine, the neurologist assured them, but there was some cause for concern about his skull shape. She quickly referred Sara and Ron to Dr. Mark Souweidane, a pediatric neurological surgeon at Weill Cornell Medicine who specializes in treating craniosynostosis.

The new parents grew increasingly anxious in the weeks before the appointment, but their worries eased as soon as they met Dr. Souweidane. “He made us feel comfortable right away,” Sara says.

Dr. Souweidane confirmed the pediatrician’s diagnosis: Harry had sagittal craniosynostosis, the most common type of craniosynostosis, caused by the premature fusing of the sagittal suture, a tissue that runs front to back along the middle of the skull. He would be fine, Dr. Souweidane explained, but he did need surgery right away to remove the fused tissue so his brain could continue to grow and develop normally.

One option was through traditional open surgery, during which Dr. Souweidane would remove the suture and “remodel” Harry’s skull. The other option was a newer, minimally invasive technique that would allow Dr. Souweidane to remove the suture endoscopically. The endoscopic procedure would take less time than open surgery, and the hospital stay would be shorter, but it would require follow-up use of a cranial remodeling helmet for up to a year to help reshape Harry’s head. 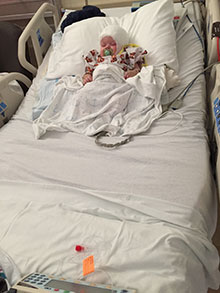 Having already researched the options online, Sara and Ron knew which one they wanted: the less invasive endoscopic surgery. “We didn’t want Harry to be in the hospital for five days, and we didn’t want him to have a scar from ear to ear,” she says. “Plus, he’s got the cutest face in the world — a little helmet wouldn’t change that!”

As Harry was prepped for surgery, Sara and Ron found themselves overwhelmed with emotion. Then it was time to say goodbye. “Leaving Harry on the operating room table was the hardest things we’ve ever done,” says Sara. “Just the thought of him being in pain of any kind made us cry. But we both knew it was the right decision, and we were happy we made it together.”

The surgery lasted three hours. Together with Harry’s grandparents, they waited outside the operating room while time passed in a blur. Though the experience was difficult, they never doubted that Harry would be fine. “We had a lot of support and trusted the surgical team completely,” says Sara. “When they finally came out to tell us all went well, it was a pretty amazing feeling.”

Walking into the pediatric ICU, Sara and Ron were startled to find him in a full-sized hospital bed instead of a crib, looking tiny and frail. Seeing his bandaged head and pale face, Sara burst into tears. “He was groggy and not himself and at one point he was crying like he was in a lot of pain,” she recalls.

Doctors gave Harry morphine, and his parents watched as his tiny body went limp and he fell into a deep sleep. Then they ordered a blood transfusion. “Luckily, I had given blood the week before, just in case Harry needed it,” says Sara. “It was comforting knowing he was getting my blood instead of a stranger’s.” 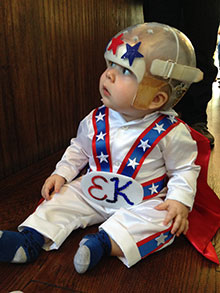 Harry's parents had a great sense of humor about the helmet, even taking advantage of it with an Evel Knievel costume for Halloween.

Harry rebounded quickly after the transfusion. His color returned, he started to smile, and the bandages came off. A day and a half after surgery, Sara and Ron were able to take him home. “He never needed anything other than Tylenol after that one dose of morphine,” says Sara. “He recovered really quickly.”

Two weeks later, Harry got his first remodeling helmet. Sara and Ron were worried it would bother him, but by the second or third night “he was happy as a clam wearing it and slept with it fine,” says Sara. “His head was sweaty and smelled like a hockey pad, but other than that it was no problem!”

The bigger adjustment was getting used to all the stares from people whenever they took Harry outside. “His cute little cheeks smooshed in that helmet attracted all kinds of attention,” Sara says. “It definitely led to some interesting conversations with strangers, but we were always happy to talk about it. He became a little celebrity in our neighborhood.”

Nine months later, on Harry’s first birthday, he graduated from helmet therapy and Sara and Ron were able to take it off for good. His head now looks completely normal and the incisions have healed — and he’s still cute as a button. “Luckily, he’s got a good head of hair and you can’t even see his two little scars,” Sara says.

Before the surgery, Sara and Ron had talked to other parents about their experience with craniosynostosis, and they found it comforting to discuss the treatment options. “Speaking to other parents has really reinforced our decision to have the endoscopic surgery with helmet therapy,” says Sara. “We were 100 percent happy with it.” 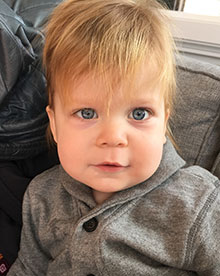 They were also happy with the care they received from Dr. Souweidane. “We love our little man more than anything, and if we ever felt like he was getting less than the best care we would have run out of there!” says Sara. “We never felt that way with Dr. Souweidane. From our first diagnosis through the surgery and the follow-ups, he made us feel comfortable. We could have researched other doctors, but Dr. Souweidane just seemed right for us.”