I Was Awake During My Brain Surgery

Everyone knew Rachel must have suffered a concussion — when the 16-year-old soccer player took a fall during a game, she hit her head so hard that her dad, sitting high up in the stadium, heard the impact. But the Florida teen got up and finished the game; it wasn’t until the next day, when she just wasn’t feeling right, that she went to the emergency room. That’s where she found out that a concussion was the least of her worries.

Doctors determined that yes, she did have a concussion, but a brain scan showed that she also had several malformations called cerebral cavernous angiomas. These abnormal structures are characterized by dilated areas that weaken the vessel walls and slow the flow of blood through “caverns” or small cavities. The abnormally thin walls of a cavernous angioma (also called a cavernous malformation) makes it prone to leakage and bleeding — and one of Rachel’s was bleeding.

“We were pretty shocked,” says Rachel, “but that fall was a really blessing in disguise. Without the MRI I wouldn’t even have known I had this condition.”

Cavernous angiomas are complex conditions, so the local hospital referred Rachel to the chief of neurosurgery at Jackson Memorial Hospital in Miami, who successfully removed the bleeding malformation. But as the MRI scan had shown, there were several other angiomas, each one a risk for a future bleed. Six years later, it happened.

“I went to the local emergency room, and they flew me by helicopter to a different hospital in Orlando that was better for brain surgery,” Rachel says. She had another successful operation, but she was certain it would happen again — not only did the other original malformations remain but new scans showed that she’d developed a few new ones as well.

Another six years later Rachel, then 28, was living in New York when she passed out one day and was taken by ambulance to the nearest emergency room. Recognizing that the condition required cerebrovascular expertise, doctors put Rachel into an ambulance again and sent her uptown to NewYork-Presbyterian Hospital and Weill Cornell Medicine — and to Dr. Philip Stieg.

Rachel didn’t realize at first that she’d just been introduced to a world-renowned expert in cerebrovascular surgery. “He just came in and introduced himself, and he explained that this surgery would be fairly simple, because the cavernous angioma was on the surface of the right side of the brain. He assured me I would get through this with no problems.” Rachel researched Dr. Stieg and discovered that she’d been delivered into the hands of one of the best neurosurgeons in the world for her condition. After the surgery went as easily as he’d promised her, Rachel vowed that Dr. Stieg would be her only neurosurgeon from then on. 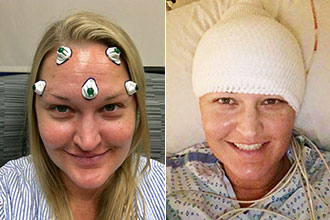 Left: Rachel being prepared for her awake craniotomy. Right: A few hours later, Rachel was in recovery.

That’s what brought Rachel back to Dr. Stieg when a fourth cavernous angioma acted up — and this one was not nearly as simple as the previous three bleeds. “This one was in a risky place in my brain,” says Rachel, “right next to my Broca's area, which controls speech. It had bled four or five times, but Dr. Stieg wanted to hold off on surgery due to its dangerous location. When it bled twice in rapid succession, though, we knew something had to be done. I had done a lot of research on this, and I remember saying to my husband that I think this one is going to be an awake surgery. I was mentally prepared for it.”

After an MRI and a functional MRI (fMRI) to determine where the cavernous angioma was located relative to her Broca's area, Rachel and her husband reviewed the scans with Dr. Stieg. As she’d predicted, Dr. Stieg recommended awake surgery so he could monitor her speech during the procedure and stop if there were any indication that her speech would be affected. He also introduced her to Dr. Rohan Ramakrishna, who specializes in awake craniotomy and who would do the surgery together with Dr. Stieg. They would also have a neuropsychologist, Dr. Kenneth Perrine, in the room with them to conduct the ongoing testing needed during the procedure.

“Dr. Stieg said that if at any point he thought the surgery would affect my speech in any way he would stop and close me up,” says Rachel, now 34. Rachel did not hesitate before making the decision to proceed. “Seeing Dr. Stieg is comforting for me — I truly trust him with my life. I know whatever answer he has for me is what I am going to do.”

“We don’t do awake craniotomies every day,” says Dr. Stieg, “but there are certain circumstances in which they are extremely valuable, and this was one of them. When I’m operating near what we call an ‘eloquent’ area of the brain, I need to know immediately what the effects of surgery are. When the patient is awake and talking and answering questions, I know when everything is fine — and if there is even the slightest change in speech or cognition, I can stop before there’s any serious damage. The last thing a surgeon wants is to have a patient wake up compromised in some way — and then it’s too late. I need that feedback right in the OR, and awake craniotomies give me that.”

Listen to Rachel talk with Dr. Stieg about her surgery in this episode of This Is Your Brain With Dr. Phil Stieg.

“Awake craniotomies give us the opportunity to map the brain, and thus avoid areas that are critical for normal speech function,” says Dr. Ramakrishna. “In Rachel’s case, the mapping results gave us exactly the information we needed to plan a safe route to the cavernoma."

During an awake craniotomy, a patient is put under deep twilighting rather than general anesthesia while the doctors get started — the patient is not awake for the incision or when surgeons are opening the skull. Once the brain is exposed and the surgeons are ready to proceed, the patient is brought out from under anesthesia without any tranquilizers or other medications running.

“I remember getting onto the operating room table, and then nothing else until I woke up during surgery,” says Rachel. “I remember somebody saying my name. I could tell that I was on some kind of medication, but I could talk and answer questions. I wasn't in any pain, and I didn't feel uncomfortable on the table. My head was strapped in so I couldn't move, but I could see the neuropsychologist perfectly.”

Neuropsychologist Kenneth Perrine, PhD, specializes in evaluating patients during brain mapping and awake craniotomies. During these operations he tests language while the neurosurgeons turn off small parts of the brain with a mild electrical current. Dr. Perrine might ask a patient to count, name drawings of objects, read sentences from a card and supply a relevant missing word (for example, “we went to the airport to catch a ____”), or answer questions to test both verbal comprehension and word finding (such as “what does a king wear on his head?”). Some of the conversations he has with patients are less structured, but even during small talk he is listening for the minuscule changes in language or cognitive processing that might signal a problem. For instance, a patient might suddenly have difficulty finding a word while talking or start mixing up words, such as saying “obligation” instead of “operation.” 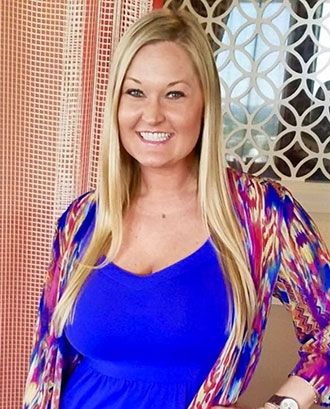 Rachel says she had no sensation at all of anyone working on her brain when she woke up from the anesthesia while on the O.R. table. “I was mainly looking at the neuropsychologist,” says Rachel, “and at one point I even asked where Dr Stieg was. I heard him say ‘I am right here’ — of course he was there, he was operating on my brain!” Dr. Perrine notes that Rachel was wide awake and comfortable throughout the mapping and surgery, and was even joking with him and the neurosurgeons.

As Dr. Stieg and Dr. Ramakrishna worked in her brain, Rachel talked with Dr. Perrine about a recent trip she and her husband had taken to Thailand and Cambodia, and she answered questions from cards he held up for her. “I remember hearing Dr. Stieg talk, but it was mainly to Dr. Perrine, asking for the next card or saying to hold on or to stop. I thought I was falling asleep a couple times but I learned from Dr. Stieg later that they were in an area where I couldn't speak. They were able to get around it and still get the entire cavernous angioma out.  This was the whole point of awake brain surgery — if I had been completely asleep there’s a good chance I wouldn't be speaking today!”

Fortunately for Rachel, her speech is perfect and her recovery has gone well. She’s aware of the other cavernous angiomas lurking in her brain, and she’s resigned to the likelihood of future bleeds. (After all, she sighs, it’s happened every six years since she was 16.) She still has some rough days — she says weather can trigger headaches, blurred vision, and pain at old incision sites — but she appreciates the support she gets from her husband, family, and friends.  “I just stay positive and enjoy my life,” she says.

She’s certainly positive about Dr. Stieg, Dr. Ramakrishna, and Dr. Perrine. “I am forever grateful to everyone at NewYork-Presbyterian Hospital and Weill Cornell Medicine,” she says. “Dr. Stieg is one of the best neurosurgeons anyone could ever have. His knowledge of the brain, and the way he explains everything in a way you will understand is remarkable. I know that he isn't the type of doctor who just goes in for surgery if he doesn't have to. He cares about his patients and he has the best team of neurosurgeons around him that are wonderful too. Having Dr. Stieg as my doctor makes me feel like I am the lucky one!”