"I Was Like the Leaning Tower of Pisa Before!"

Before 2012 Dr. Jeff Linden was leading a glamorous life as one of the premier endodontists in New York City. A leading expert in his field, Jeff cared for his patients, mentored young dentistry residents at top teaching hospitals, and was often invited to travel to lecture about new products and procedures. On his days off, Jeff played tennis and took his convertible out to his house in the Hamptons. When he developed debilitating back pain, he thought his posh lifestyle would come to an end. But thanks to the “golden hands” of Dr. Roger Härtl and Dr. Kai-Ming Fu, he has regained his freedom.

“My life changed completely in 2012,” remembers Jeff. “I couldn’t drive, I couldn’t play tennis. The pain was astounding.”  The culprit turned out to be scoliosis, a new diagnosis for him at age 55. Jeff’s neurologist recommended he think about having surgery and suggested several possible neurosurgeons to consider. After doing some research, Jeff requested a consultation with Dr. Roger Härtl.

Dr. Härtl confirmed that Jeff had developed de novo scoliosis, meaning that there was no prior history of the deformity.  Most cases of scoliosis develop in childhood or adolescence, but the abnormal lateral curvature can happen in adults as well. The curve causes nerves to become compressed, leading to symptoms of numbness, sciatica, low back pain, fatigue, and stiffness. Treatments include pain management, bracing, and – in severe cases – corrective surgery.

At the time, Dr. Härtl believed that surgery to correct the curve was too risky. The surgical procedures available were a laminectomy and a discectomy; they would not correct the curve, but Dr. Härtl recommended them for pain relief. “These surgical maneuvers relieved pressure on Jeff’s nerves and curved spinal cord,” recalls Dr. Härtl. “Ideally the relief from these measures would have lasted a long time, but that’s not always the case.”

Jeff felt better after surgery, but the lower back and leg pain returned. He continued making rounds with residents but he stopped lecturing. “It would take me several hours to get up and moving in the morning,” he recalls. “The pain puts you in a changed state. You don’t go out as much. I had to stop at every fire hydrant to sit down.” To keep the pain at bay, doctors at the newly opened Weill Cornell Medicine Center for Comprehensive Spine Care treated him with injections. At each visit, he says, the staff would cheer for his recovery. “They used to joke with me,” Jeff says. “They’d say, ‘We hope you never come back!’” 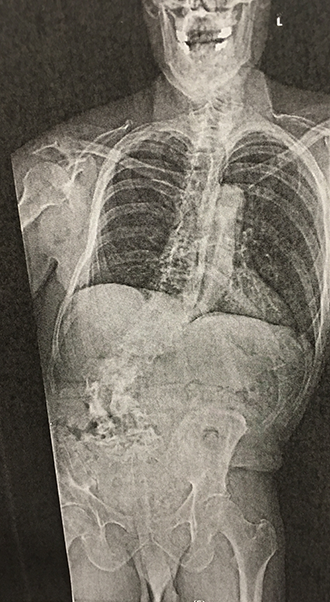 But the answer to managing his pain proved elusive. “I was screaming in pain,” Jeff remembers. “I didn’t want to live like that.” He reached out to Dr. Härtl to see if there were any new surgical solutions. “We would correspond as he tried different injections to ease his pain,” says Dr. Härtl. “I would check to see if the injections had any effect and he would send me a comprehensive summary of what he was feeling. It was a hands-on process, and it all came together when we looped in Dr. Fu. He’s a very capable and talented doctor for these intensive scenarios.”

Technology had progressed in the five years since Jeff had first asked Dr. Härtl about surgery. Dr. Kai-Ming Fu recommended an advanced spinal reconstruction utilizing the latest technology, intraoperative navigation, imaging, and advanced instrumentation. The spinal reconstruction was approached from the front and the back, allowing larger grafts to achieve a more normal curvature to the lower spine.

“When I met Dr. Fu,” Jeff says, “I asked him how often he did this procedure.” Dr. Fu, who specializes in spinal deformity surgery, performs several reconstructions a month, which was reassuring for Jeff. “I didn’t think about it twice,” he says, “I didn’t think about anything but getting well. It was a non-discussion — this surgery was going to be done.”

Jeff went into the operating room in October 2018 for two surgeries, one week apart. “We performed the ALIF first,” says Dr. Fu, “followed by a second stage posterior correction and stabilization.”

“His spine is no longer curved,” notes Dr. Fu, “He stands up straight and is in significantly less pain.”

Jeff continues his recovery, but since the surgery he is walking tall – literally. “I was like the Leaning Tower of Pisa before,” he exclaims. “After the surgery, I gained back four inches in height. I look like a different person!” As he walks around the Upper West Side now, neighbors comment how different he looks. “I got my life back after this surgery,” Jeff says emotionally. “I can’t fall down and injure myself, so I have to be careful. But I’m able to go out and do things!”