"If He Couldn't Help Me, Then No One Could"

Eve Armstrong is an assistant professor of physics at the New York Institute of Technology and a research associate in the department of astrophysics at the American Museum of Natural History in New York City – in other words, she’s an accomplished academic with an outstanding resume. One accomplishment you won’t find on her CV is conquering a brain tumor – but she did it, thanks to a team at NewYork-Presbyterian and Weill Cornell Medicine that took her seriously.

It started twelve years ago, when Eve bent over during a Pilates move and felt something “off.” After she straightened up, she couldn’t hear anything for an hour, then her hearing returned. “I thought it was a change in intracranial pressure,” Eve said. “But I just forgot about it.”

The sensation returned months later, when she woke up one day with a sinus infection – and no hearing. The sensation passed, but this time her hearing returned in her left ear but not the right. “Four weeks went by, and I figured this might not correct itself on its own,” recalls Eve.

She didn’t know it at the time, but the culprit behind her loss of hearing was a tumor called an acoustic neuroma. These tumors, also known as vestibular schwannomas, start out as small growths arising from the cochleovestibular nerve within the temporal bone. As an acoustic neuroma grows, it compresses the cranial nerves that regulate facial movement, sensation, hearing, balance, swallowing, and speech. Over time, it grows and exerts pressure on the nerve and nearby brain tissue, causing hearing loss, tinnitus, facial numbness, and paralysis. Though the acoustic neuroma itself is benign, it can cause serious problems if left untreated.

The notion of a tumor seemed outlandish to Eve. “I had never even heard of acoustic neuroma,” she says. “When the first doctor I consulted suggested that there was a small chance that’s what it was, I internally rolled my eyes. I was convinced that my hearing loss was a blown eardrum brought on by my exercise routine.”

When her boyfriend (now husband), Wayne, suggested she see another doctor, Eve laughed. She was certain that the problem was a blown eardrum, and she didn’t particularly trust doctors. “In my experience, a doctor was a person who met you for five minutes to inform you of something you already knew, and then sent you a bill for a hundred dollars,” she admits.

Wayne insisted, and Eve begrudgingly went to a nearby hospital, where a doctor recommended an MRI. “I thought it was an absurd waste of time,” she says, “and the doctor wouldn’t discuss the possibility of exercise-induced hearing loss until the scan was done. So I sought someone else.”

That someone else was Dr. Ashutosh Kacker — an ear, nose, and throat surgeon here at NewYork-Presbyterian and Weill Cornell Medicine. Dr. Kacker also suspected a tumor, but he also understood the importance of listening to his patient. “She felt like no one was listening to her,” says Dr. Kacker. “It happens — people feel that they know their bodies best, and it’s also our job to listen and make sure all possibilities are accounted for. For Eve, it could very well have been her exercise or a virus.” Rather than insist on an MRI, Dr. Kacker prescribed steroids to reverse any possible damage caused by a virus – and suggested that maybe a scan would be a good idea while they gave the steroid a chance to work.

Eve felt heard. “What surprised me the most was that he listened and we discussed my situation,” recalls Eve. “I don’t remember previously having such an experience with a doctor. I appreciated that he listened to the evidence and made a probability-based recommendation. I felt that I had found someone good.”

Dr. Kacker’s approach made the difference: Eve agreed to an MRI. The scan showed what Eve had thought was impossible: a tumor. Not only that, it had probably been there a while and had been growing – that meant a surgical evaluation. Dr. Kacker called in Dr. Philip Stieg, neurosurgeon-in-chief and a world-renowned expert in acoustic neuromas. 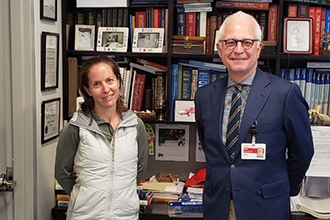 Eve Armstrong with her neurosurgeon, Dr. Stieg (socially distanced due to Covid-19)

“The acoustic neuroma had used the body’s blood vessels as a means of nourishing itself as it grew,” says Dr. Stieg. “By the time she had the scan, Eve’s tumor had outgrown its blood supply and had expanded to the point where it was compressing her brainstem.” Surgery, as Dr. Kacker and Dr. Stieg told her, was her only option.

Due to their delicate location, acoustic neuromas are often treated by two surgeons — one neurosurgeon and one ENT surgeon. Dr. Stieg and his colleague Dr. Samuel Selesnick are frequent partners on acoustic neuromas, performing dozens of the surgeries each year. Still, each tumor is different and no case is routine.

“Acoustics are unique tumors, and we learn something every time,” says Dr. Stieg. “This was a big tumor, and it was really putting Eve at risk. Our objective with the surgery was to remove a three-inch-diameter section of skull on the right side beneath her ear and to remove as much of the tumor as possible — while minimizing the assault on the seventh cranial nerve. It’s a difficult surgery, and there’s a ten percent risk of facial paralysis, but that’s small compared with the risk of not removing the tumor. There was no question in my mind that surgery was the right choice.”

Eve was impressed with Dr. Stieg’s demeanor. “Initially, of course I was concerned about the risks of facial paralysis,” says Eve. “But Dr. Stieg calmly let me know that my face would be saved. I believed him. If he was unsure about the probability of saving my face, then he wouldn’t have said that. He felt driven, alert, relaxed, self-assured, and receptive, His frankness bred confidence. I felt that if he couldn’t help me, then no one could.”

The surgery was a success, and once Eve felt strong enough to stand on her feet she found that walking helped her recovery. The surgery had removed a vestibular nerve, so her balance on the right side was unsteady at first. She says it took a full year before she felt completely normal again; by the second year things had leveled off — “I felt like myself again.”

Eleven years later, she is thankful for her strength and doesn’t take it for granted. “The fragility and transient nature of health and strength,” she says, makes her appreciate life all the more. “At a time when I couldn’t help myself, I would have died trying to do it alone. Perfect strangers stepped up and helped. Given that it all turned out so well, I’m grateful that it happened.”

Eve becomes reflective when asked what advice she’d give to other people facing this situation. “You can face this,” she says. “You are far stronger than you think you are. You have no idea how strong you can be until you have to be. Dr. Selesnick said something about acoustic neuromas that still resonates with me. ‘No one wants to be told that they have a tumor in their head. But if you were to have a tumor in your head, this would be your top choice.’”

Most importantly, she recalls how her doctors made her feel. “Find a doctor that makes you feel comfortable and confident as possible and with whom you can communicate frankly,” says Eve. “What you’re facing is hard, and you need to go in there as psychologically strong as possible. Your psychological state is going to impact how you fare physically through the surgery and recovery.”