At first, Lexi Miller thought her ear was just clogged with water. The 28-year-old account manager from Mahwah, New Jersey, tried hopping on one leg in hopes of dislodging it, but the whooshing sound didn’t go away. It was a curious annoyance, to be sure, but then the world shut down due to the Covid-19 pandemic and Lexi had plenty of other things to think about. She certainly didn’t realize she was about to begin a whirlwind tour of doctors in search of a solution for what turned out to be a curable form of pulsatile tinnitus.

As she adapted to her new work-from-home normal and realized her hopping solution was not going to work, Lexi reached out to several local doctors to get answers. Each one offered a different diagnosis: A narrow ear canal. A displacement of the temporal bone creating pressure on a vein. One ENT specialist prescribed steroids. Another proposed a treatment that particularly unnerved Lexi. “They wanted to ‘snip’ the vein and cement it back to my head!” she exclaims.

Lexi grew increasingly dissatisfied with the options she’d been offered, so she turned to the Internet to get answers. “I did a lot of searches, and a lot of what I found led me to pulsatile tinnitus,” she says. “But I read that there was no cure. I was defeated — we were all in lockdown, and anything that wasn’t an emergency was a non-starter. But when the cases finally started going down, I decided I needed to go to the best of the best in New York City. Someone who wasn’t going to cement my vein, and who understood everything happening to make an educated decision.”

With the encouragement of her parents, Lexi booked an appointment for August 11 at NewYork-Presbyterian Weill Cornell Medicine with Dr. Samuel Selesnick, an otolaryngologist (ENT). Looking at her scans, Dr. Selesnick spotted a narrowed vein that might be the cause of the whooshing sound. “No one had ever told me about it before,” says Lexi. “He told me that I needed to see Dr. Boddu.” 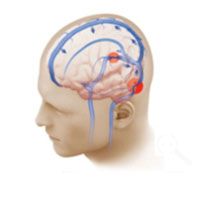 For certain patients whose pulsatile tinnitus is caused by venous sinus stenosis – a narrowing of one or both veins that drain blood and cerebrospinal fluid from the brain – an innovative stenting procedure can reopen the vessel and stop the sound. The procedure was originally tested as a way to resolve idiopathic intracranial hypertension (IIH, sometimes called pseudotumor cerebri), and during the trial it became clear that the stent resolved symptoms of pulsatile tinnitus that often accompany IIH. The procedure, still in clinical trial, has been used successfully in many patients, and Dr. Srikanth Boddu of Weill Cornell Medicine co-authored the paper about the procedure and the trial results.

“It’s a minimally invasive procedure that targets the narrowed vein,” says Dr. Boddu. “After we confirm the stenosis on an angiogram, we put the patient under anesthesia and insert a tiny catheter in the femoral vein in the upper part of the leg. From there, we thread that to the affected vein in the brain, where a self-expanding stent is deployed. The stenosis is relieved, which restores healthy blood flow and can reduce or entirely eliminate the pulsatile tinnitus. The minimally invasive nature of the procedure means that the patient able to ambulate 6 hours post procedure, stays overnight in the hospital and is discharged next day.”

Once New York City hospitals were allowed to perform elective surgeries again, Lexi scheduled her procedure. With protocols for Covid-19 in place, Lexi wasn’t allowed to have anyone with her at the hospital, but she never felt uneasy. “Every doctor that was involved, they came to me and walked through everything they’d be responsible for,” she says. “I knew everything that was going to happen. And even though going under anesthesia was nerve-racking, I felt comfortable being in the OR with all of them.”

On December 4, Dr. Boddu performed the stenting procedure. “Lexi’s stenosis was severe,” he says, “and the narrowed section of her brain vein was extremely narrow, to the extent that I needed to use a balloon to open the narrowing even to navigate the stent across it." Despite the intricacies of the procedure, Dr. Boddu placed the stent and successfully opened the vein.

“I woke up with no noise,” Lexi says. “I was crying tears of joy after the surgery. It was instant gratification.”

The whooshing sound was gone, but Lexi still needed a little recovery time. “The biggest thing were the headaches after the procedure,” she says. “Some days I felt good, and on others I had pain. Having a procedure in your brain and not know what was going on is scary, but I talked to Dr. Boddu’s team and they reassured me it was normal. I never felt weird calling them, even five times a day to make sure what was normal.”

Lexi, now back to her old self, encourages anyone with pulsatile tinnitus to find a doctor they’re comfortable with. “Dr. Boddu’s bedside manner, his calming nature, makes you feel like you’re in the best hands ever,” she says. “Looking back, I’m so thankful for my parents — they didn’t stop until I found someone I felt comfortable with. I saw those first doctors in June. If I went through with them I don’t know how happy I would have been. If you find yourself in my situation, look for the best — it’ll change your life.”