Steve Smith, a businessman and avid golfer from Long Island, New York, was 50 years old when he started to develop a tremor on his left side. It didn’t bother him at first, but over the next ten years the tremor grew worse. Things like drinking a cup of coffee, cutting food on his plate, and using a screwdriver all became more difficult for him.

But the biggest problem, from his perspective, was how the shaking in his hands impacted his golf game. When the tremor started affecting his swing, Steve could no longer use a short putter. He compensated by using a long putter while anchoring his left hand against his chest to get it out of his stroke. But eventually that trick stopped working. “My play deteriorated to the point where I could no longer compete,” says Steve. “And for a former two-time club champion with a single-digit handicap, that was both frustrating and embarrassing. I needed to do something -- anything.”

Steve had essential tremor, a progressive neurological condition that causes uncontrollable shaking or trembling, most often in the hands. It’s caused by a malfunction in a part of the thalamus, the region of the brain responsible for motor control, and it is the most common of all movement disorders. While it isn’t life-threatening, essential tremor can be debilitating over time. It interferes with everyday activities like eating, drinking, writing, or tying shoelaces.

Two surgical options to reduce or eliminate essential tremor are invasive thalamotomy, a procedure that destroys the tiny section of the thalamus that’s malfunctioning, and deep-brain stimulation (DBS), which involves implanting leads into the brain to deliver tiny electrical pulses to interrupt the abnormal brain activity and stop the tremors. Both procedures require making an opening in the skull.

Fortunately for Steve, just as he was ready to take action, a new noninvasive treatment option using harmless sound waves to reach the thalamus and disrupt the source of the tremors was approved by the FDA. Steve found out about it by chance one night while watching the news on TV.  In the segment, Dr. Michael Kaplitt, a neurological surgeon at Weill Cornell Medicine and pioneer in the use of this procedure, explained how using image-guided focused ultrasound could eliminate the tremors without any incisions, reducing the risk of surgery-related complications and providing faster recoveries. Intrigued and hopeful, Steve called Dr. Kaplitt the next day to make an appointment.

During his initial visit with Dr. Kaplitt, Steve and his wife, Pamela, a nurse, learned more about the new procedure. Steve would be fitted with a helmet that holds an array of 1,000 sources of ultrasound energy. Then he would enter an MRI scanning machine, where Dr. Kaplitt would use magnetic resonance imaging (MRI) as guidance to pinpoint the exact location in the brain where the tremor originates and focus the ultrasound waves there. Each individual beam is harmless, but when all the beams reached the location together in one tightly focused ultrasound pulse, the combined energy would destroy the lesion without damaging any healthy brain tissues. 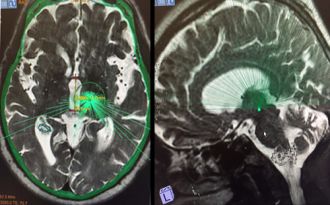 A slice of the focused ultrasound beam plan shows some of the nearly 1,000 beams directed at the source of the tremors. Left: the axial view (from above); right: the sagittal (side) view

The procedure would take three to four hours, with multiple pulses delivered. There was no need for anesthesia and Steve would be awake the entire time. Despite the out-of-pocket cost (insurance currently doesn’t cover all the costs of focused ultrasound for essential tremor), Steve was completely on board. “That’s what money is for, to improve one’s quality of life,” he says. “I felt totally informed and at ease with Dr. Kaplitt. His knowledge and experience level was obvious, and his bedside manner was outstanding. It made my decision to have the procedure an easy one.”

The day of the procedure, Steve was ready.  “For whatever reason, I had no apprehension going into it,” he recalls. “I was excited knowing what the potential outcome would be.”

Before the first ultrasound pulse was delivered, Steve was asked to draw spirals and straight lines on a piece of paper as a baseline indicator that would help gauge his progress. As expected, Steve’s lines were erratic and messy due to his shaking. Once the treatments began, Dr. Kaplitt paused between pulses so Steve could draw lines and spirals again. To Steve’s delight, his lines began to look neater and more controlled with each treatment. “I was encouraged by each interaction I had with the doctor in between each treatment,” Steve recalls. “That got me mentally ready to deal with the next treatment. It helped me stay calm and relaxed.”

As the pulses continued and the intensity of each treatment increased, Steve started to feel pressure (but no pain) in his head. Finally, after the fourth pulse, Steve noticed a dramatic change. “All of a sudden, I had no more tremors,” he recalls. “It was a miracle!”

Steve continued to see improvement until the final pulse. When the procedure was over and the helmet was removed, he couldn’t stop staring in disbelief at his now steady hand. For the first time in a decade, the uncontrolled shaking was gone. He went home the same day and was soon back on the golf course, swinging a club and using a short putter again – just like he used to. 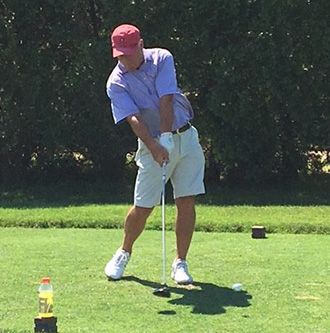 “I’ve been walking on cloud nine ever since the procedure,” says Steve. “My golf game has improved. My handicap went all the way up to a nine. My friends are laughing over how good I’m hitting it and playing. In just four months I’ve come down to a four handicap. Taking five strokes off a single digit handicap is dramatic. So whether you’re a 5, 15 or 25 handicap this procedure is a game changer”

He encourages anyone with essential tremor to consider getting focused ultrasound. “It’s a miracle—and a total life-changer,” he says. “All the happiness and satisfaction it brings is well worth it.”