Like many ordinary 12-year-olds, Anna Palmieri had an exciting summer full of family trips, camps, sleepovers with friends, and long, restful nights of sleep. She says it was the best summer she’s ever had, and not the least bit like any she’d known before.

That’s because for her first 11 years she had suffered from debilitating nighttime seizures caused by epilepsy, and her parents had to monitor their daughter all night, every night – no sleepovers allowed. Today, thanks to Dr. Caitlin Hoffman, Dr. Theodore Schwartz, and the pediatric epilepsy team at Weill Cornell Medicine, the Palmieri family can finally lead a normal life filled with camping, slumber parties, and uneventful bedtimes.

Marc and Kristen Palmieri of Bayside, New York, remember how their baby’s seizures started when she was only five months old. “Anna averted her eyes, stiffened an arm, and rolled to her side for 30-second episodes,” Kristen recalls. The seizures came quick and fast as they sped to the hospital.

By the time the Palmieris arrived at the ER, Anna had suffered a cluster of 20 more partial seizures. The hospital admitted her to the Pediatric ICU that night and diagnosed her with frontal lobe cortical dysplasia, meaning that the top layer of the brain hadn’t formed properly. It carries the distinction of being one of the most common forms of epilepsy.

There was a bright side to the diagnosis: Anna’s seizures only came while she slept. As she got older, that meant her busy schedule at school, her practices and performances as an accomplished company dancer, her outreach to autistic students, and her role as Student Council Vice President could continue uninterrupted. Her parents even let her participate in sleepovers — at least until bedtime came. They would have to go pick her up once it was time for lights-out.

Marc and Kristen took turns sleeping next to Anna – every night – so she wouldn’t hurt herself in her sleep. They would check on her periodically to make sure that any slight movement wasn’t the prelude to a seizure. As Anna got older Kristen could no longer hold her back, and even Marc, at 200 pounds, found it more difficult. “I struggled with all my strength to keep her fists from closing in on her throat when she would contract,” he remembers. The nights were unpredictable — one night Anna might sleep soundly, but another night would be long and arduous, with Anna experiencing up to seven seizures.

In their search for a cure, Marc and Kristen took Anna through medication after medication and alternative treatment after alternative treatment. “We tried seven different pharmaceutical medicines, CBD oil, and different diets,” Marc remembers. With every promising treatment came the same devastating result: the seizures would initially abate, then return within months. When Anna was three, a severe reaction to one drug combination left her hospitalized for 17 nights; her doctors believed she lost a year of physical and cognitive development.

Things took a turn for the worse when Anna was 11. It started on a sunny April day — she felt the symptoms of a seizure coming while she was playing softball. “I felt my heart race, chest cramp, and my right arm went numb,” Anna remembers. She was rushed to the emergency room, where doctors confirmed that her seizures were no longer limited to her sleep. A month later, when Anna’s arm started to go numb, her doctors diagnosed her with Todd’s Paralysis, a condition that causes fatigue and numbness on one side of the body following a seizure.

Convinced that they needed a new approach to Anna’s treatment, Marc and Kristen performed a thorough search of neurologists who specialized in pediatric epilepsy. Many sources pointed them to Dr. Srishti Nangia at Weill Cornell Medicine and NewYork-Presbyterian, a pediatric epileptologist, but before the Palmieris could make an appointment, Anna suffered a series of seizures that sent them in to the Emergency Department at NewYork-Presbyterian/Weill Cornell Medical Center. As Anna continued to seize in the Pediatric ICU, Dr. Zachary Grinspan, the director of the Pediatric Epilepsy Program, told Marc and Kristen, “You’ve been living with this long enough. It’s time we step it up.” He connected them with Dr. Hoffman, a pediatric neurosurgeon with advanced training in the surgical treatment of epilepsy. For the first time, Marc and Kristen thought about surgery as a viable option for their daughter.

The meeting with the comprehensive pediatric epilepsy team left an impression on Marc. “There was a confidence and excitement that we’d never encountered,” Marc recalls of the doctors. When Dr. Hoffman and her colleague Dr. Theodore Schwartz let the worried couple know that Anna was a candidate for surgery, they felt relief that a solution was in sight. Any time they felt overwhelmed by the gravity of what brain surgery entailed, they thought back to the team’s confidence and took solace as best they could. “Everyone was so determined, thorough, and clear that we felt we were in the best of hands,” says Marc. This was the best and only chance at a cure — they had to persevere. 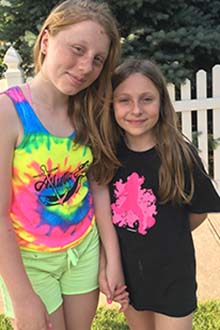 Anna with her younger sister, Nora

The weeks leading up to surgery were a challenge. Due to her new daytime seizures, Anna had to take school classes at home. The anti-seizure medicine didn’t help much — they made her tired, hungry, and dizzy. In one close call, Anna felt the warning signs of a seizure while on the stairs. She would have had a terrible fall were it not for her younger sister, Nora, grabbing her immediately. Anna remembers that the only bright spot in being at home was that she got to watch one of her favorite movies, The Greatest Showman, over and over.

When the day of surgery came, Anna took comfort in the people around her. She recalled meeting a girl Dr. Hoffman had introduced her to who had undergone the same surgery, which made her feel less alone and less frightened. Dr. Hoffman and her team reassured her and answered all of her questions. Anna recalled that Dr. Hoffman had told her the surgery would take four or five hours, but once the anesthesia took effect it felt more like four or five seconds.

For Marc and Kristen, of course, those hours felt like a lifetime. Their family joined them in the waiting area and they all took comfort in each other’s company. When Dr. Nangia appeared three hours later and said that things were going well, they finally felt like they could, as Marc remembers it, “learn to breathe again.”

Anna’s recovery was swift. Her doctors recommended that she “lie low and rest” for two weeks, which she did, but within six weeks she was swimming, running, dancing, and – much to everyone’s relief – sleeping like never before. “For the first time in eleven years I wasn’t sleeping at her bedside,” says Marc.

Now, the Palmieris feel a sense of hopefulness thanks to Dr. Hoffman and her team. They’re daring to believe that Anna is cured. Marc was beaming as his daughter headed off to a week-long performance camp. “We, finally, were able to imagine her there, not worrying about when a seizure might strike, but just having a wonderful time performing with friends.”

Update: Anna is seizure free four years after this story. Her father wrote a book about the family's experience, called She Danced With Lightning. Read an excerpt here.