Navigating Back to Normal Life

Kathy Zaccaria of Cedar Grove, New Jersey, was used to living with chronic back pain — but she always thought of it as a low-level annoyance, never a serious problem.

So in June 2015, when her lower back started hurting after she twisted it at a party, she wasn’t that concerned at first. She started taking over-the-counter pain medication, then signed up for a core strengthening exercise class five days a week thinking it would help — but it didn’t. “I had to modify everything in the class because my back was always hurting,” says Kathy. In September, she added two days of physical therapy to her weekly routine, but the pain persisted.

That November, during a family trip to Colorado, she was hiking and climbing when her knee started hurting. The next day, she felt severe pain starting in her right hip and running all the way down her right leg. “I had never experienced that before,” she says. “That was something new.”

By December, the pain had become excruciating. She had trouble driving, and sometimes had to pull over and get out of the car to stretch out. By the time she got to work at her job at a utility company, she would be in tears from the searing pain in her hip, leg, and calf. At home, her husband, Jim, and 16-year-old daughter, Kelly, took on chores and grocery shopping because Kathy couldn’t lift anything.

Kathy finally had an MRI that identified the problem — the scan showed degenerative discs between two sets of vertebrae and spinal stenosis — a condition in which the narrowing of the spine puts pressure on the nerves. One of the discs was bulging onto the sciatic nerve, causing Kathy’s leg pain. She would need surgery to repair the discs and relieve the pressure, her doctor told her, and a bone fusion to shore up the two compressed vertebrae, restore proper spacing, and prevent further problems.

The idea of a bone fusion terrified her. “I was scared because of what I had read online,” she recalls. “There were people who had it done who were in so much pain and felt like so much had gone wrong.”

Over the next several months, Kathy sought out a second and then a third opinion from different surgeons in New Jersey, who all had the same recommendation — a discectomy and bone fusion — all using the same traditional open surgery techniques that required long recovery periods. “A couple of the surgeons said I’d be out of work for three months,” Kathy recalls. “They also said I wouldn’t be able to drive for a while, or go out in the sun. One even said I’d have to wear a brace over my clothes for a couple of weeks. It sounded horrible.”

Meanwhile, Kathy began getting epidural shots to control the sciatic pain and eventually tried a nerve block, which only made the pain worse.

Then one day in June 2016, she was on the phone with a friend discussing her need for back surgery, and her friend told her about Dr. Roger Härtl, director of spinal surgery and neurotrauma at Weill Cornell Medicine and director of the WCM Center for Comprehensive Spine Care. Her friend’s son, it turned out, worked for a surgical supply company that provided Dr. Härtl with some of the state-of-the art equipment he used for surgery. She told Kathy that her son thought the world of Dr. Härtl and considered him the best in his field. 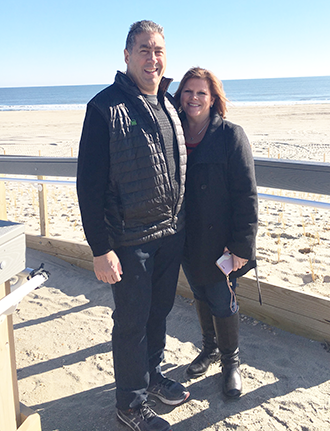 Kathy Zaccaria and her husband, Jim

Kathy called Dr. Härtl’s office immediately, sent him her MRI, and was soon meeting with him and his nurse practitioner, Chelsie McCarthy, in their New York City office. After a thorough physical examination, Dr. Härtl agreed that she needed a discectomy and bone fusion. But his methods were much less invasive that the other surgeons. By using advanced procedures called a microdiscectomy and TLIF (transforaminal lumbar interbody fusion), Dr. Härtl explained, he would only need to make small incisions in Kathy’s back. He would then use advanced 3D computer navigation imaging to guide him as he repaired the discs, stabilized the vertebrae, and took pressure off the nerves. These minimally invasive techniques would mean less pain, fewer complications, and a much faster recovery time. “Instead of missing three months of work, he said it would be just six weeks,” says Kathy. “I felt comfortable with Dr. Härtl right away. He knew exactly what the problem was.”

Surgery was scheduled for Monday, August 15. Jim came with her for support, and after Dr. Härtl stopped by to explain the procedure one more time before she went into the operating room, she knew she was in good hands. “I was so excited to get it over with,” says Kathy. “It had been a year, and I had gone through so much. I wanted to move on.”

During the two-and-a-half-hour operation, Dr. Härtl and his team made small incisions in Kathy’s back and used microscopes and tubes as well as computerized navigation to help guide them through the surgery. Dr. Härtl refers to the navigation system, Brainlab’s AIRO, as an intraoperative 3D “GPS,” which allows him to navigate within the spine efficiently and safely, and with increased precision. After decompressing the discs, the surgical team inserted a “cage” between each of the affected vertebrae and affixed it with titanium screws and rods to restore proper positioning. Then they added bone grafts from Kathy’s hip to the cages; the grafts will harden over time and make the fusion permanent.

Kathy woke up groggy and had to remain on her back for the rest of the day because of a small spinal fluid leak that had occurred and was repaired during the surgery. But the next day her family was checking her out of the hospital, walking her to the car, and driving her home. “I was sleepy from the pain medication, and in pain because of the surgery, but a few days later I stopped taking the pain medication and was fine,” she says. 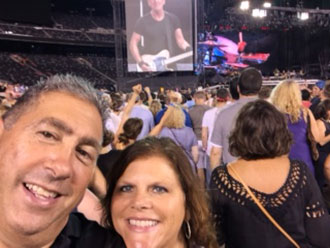 Ten days after her surgery, Kathy and Jim went to a Bruce Springsteen concert.

Dr. Härtl recommended she take slow daily walks for 15 minutes at a time during the first week of recovery. But Kathy was soon taking walks outside, working up to an hour at a time. After the staples were removed from her back, she felt even more mobile. Ten days after her surgery, she went to a Bruce Springsteen concert with Jim. “People thought I was crazy, but I got a seat in the handicapped section and walked there slowly. It felt good to be out and about and the concert was awesome. I’m not one who likes to sit around,” she adds.

Soon Kathy was driving again, and six weeks after surgery she was back at work. Today she continues going to her exercise class, which she credits for keeping her muscles strong and healthy, though she still has to modify the movements. “It will take a year for the bone fusion to take, so I still need to be careful,” she says.

Meanwhile the back pain is gone and life is back to normal. Recently, Kathy and Kelly flew to Florida together, then drove north through South and North Carolina to look at colleges. “I have to thank Dr Härtl, Chelsie, and the whole team for the great experience that I had,” Kathy says. “I am increasing my activity and getting stronger every day — and I owe it to them.”

More about Dr. Härtl | More about the advanced navigation system

More about the WCM Center for Comprehensive Spine Center