Ada Carmona’s eyes well up with tears when she describes her initial appointment at the Weill Cornell Medicine Brain and Spine Center, where she first met Dr. Susan Pannullo. “Nobody else had understood, nobody else knew what I was going through,” she says. “But Dr. Pannullo, she understood. She told me about Dr. Stieg and Dr. Ramakrishna, and she told me yes, they could take care of this.”

“This” was the meningioma that had been found near Ada’s ear canal four years earlier. She was 50 years old at the time, undergoing treatment for breast cancer near her home in Florida, when she experienced bouts of dizziness. After the third significant dizzy spell, her oncologist asked for an MRI and discovered the small tumor. Several specialists she consulted advised her to leave it alone – it was slow growing, caused only minor symptoms, and probably wouldn’t ever need treatment. Watch and wait, they advised.

The watchful waiting strategy worked for three years, but in 2014 Ada had a frightening experience driving home from the gym one day. “I felt like I was having a stroke or heart attack,” she says. “My vision went blurry, I heard noises in my ears, and I felt like I was getting electric shocks. I had to pull off the road and call 911.”

In the emergency room as well as in later visits to specialists, Ada says, the doctors in Florida didn’t seem to know what to do. Nobody seemed to understand how debilitated she had suddenly become, how desperate she was for a solution.

“I spent a month confined to my home, just sitting in a chair, afraid to move,” she says. “I couldn’t be alone, I couldn’t drive. My son lives nearby, so he could help, but my daughters live in Washington, D.C., and they had to take turns coming down to be with me. It all came on so suddenly. I had been so independent, but now I couldn’t do anything. My life had stopped, and nobody understood.”

Ada’s daughter Marisol decided it was time to look outside Florida to find the best possible treatment for her mother. “My mom needed improvement, and she needed it fast,” she says. “I stayed home from work one day just to do the research, looking for the best hospitals on the east coast for brain tumors. Once I found two good hospitals, I researched the doctors there, looking for experts on meningiomas.”

By chance, the earliest appointment the family could get was with Dr. Pannullo, so they came to New York first. “She knew right away, she understood,” Ada says. “She told me to keep my appointment at the other hospital, to learn as much as I could, but we were pretty sure we would be back.”

The family then traveled to the other hospital — another major academic medical center — but they were soon back in New York. “One of the doctors there was so rude,” says Marisol. “They said my mom should learn to live with her symptoms, that removing the tumor was one hundred percent guaranteed to cause facial nerve damage. She wouldn’t be able to open and close her eye on that side, or move that side of her face. She would probably require additional surgery in the future to fix the damage to the nerve. He just didn’t listen to us, didn’t understand that we had to have a solution that relieved the symptoms without causing all that damage.”

Marisol called Dr. Pannullo, who called back from her home that evening and quickly got Ada an appointment with Dr. Philip Stieg. The family met with him and with Dr. Rohan Ramakrishna to talk about their options.  “As soon as we all met them, we knew we’d found our guys,” says Ada. 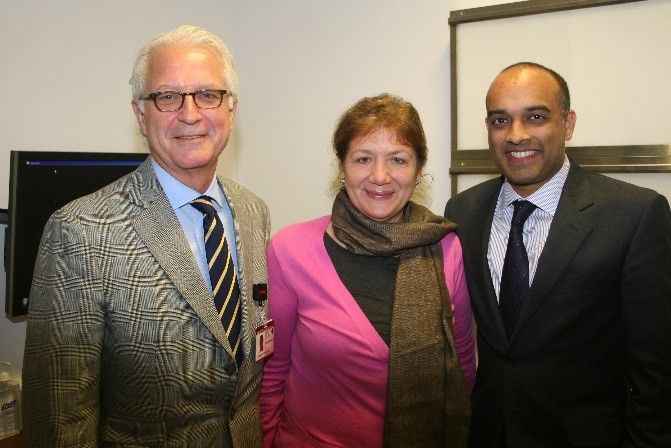 What Dr. Stieg and Dr. Ramakrishna told them made sense: The meningioma was benign, but as it grew it was creating pressure on the ear canal and the facial nerve. That pressure was contributing to the symptoms Ada was experiencing. It was true that removing it could cause damage to the nerve, but the doctors explained that surgery was not an all-or-nothing proposition.

“One of the most important aspects of neurosurgical oncology, particularly with benign lesions, is the judgment and experience of the neurosurgeon,” says Dr. Ramakrishna. “There are several factors that can help a surgeon decide when to leave a bit of tumor behind, so that facial nerve function is not permanently disabled. Moreover, with stereotactic radiosurgery, small residual disease can be easily and comfortably treated in an outpatient setting.”

Dr. Stieg and Dr. Ramakrishna worked with Dr. Pannullo to develop a personal treatment plan for Ada. First, Dr. Stieg and Dr. Ramakrishna would surgically remove most of the tumor, but not all of it. Removing most of Ada’s meningioma would relieve pressure on her facial nerve to ease her symptoms, but they would leave in place the fragment of the tumor that most directly affected the nerve, thereby reducing the risk of damaging it during surgery. The fragment that remained would be treated later, by Dr. Pannullo, using stereotactic radiosurgery. (Find out more about meningiomas.)

“Dr. Ramakrishna and Dr. Stieg talked to us a lot, and I could tell they really cared about mom,” says Marisol. “They weren’t in a hurry. They were honest and didn’t sugar-coat anything, but they wanted us to tell them our priorities and they would work with that.”

“It’s important to us to get to know our patients, and find out what it is they want from their surgery,” says Dr. Stieg. “Some patients in Mrs. Carmona’s position would just want the tumor out, no matter what the side effects might be. Others have strong feelings about what risks are acceptable and which are not. In Mrs. Carmona’s case, we respected her wish to protect her facial function, and we knew we’d be able to get good results without damaging the nerve.”

Ada adds, “They knew they could do the surgery – they said, this is what we do. The nice thing was, we knew that they do these surgeries all the time, but they didn’t act like it was routine. They knew it was MY only one. I felt like my life was in good hands with them.”

Dr. Stieg and Dr. Ramakrishna planned an advanced surgical approach for Ada, one that allowed them to monitor her facial nerve function in real time during the surgery. Their skull base approach also allowed them to access the tumor without manipulating or retracting healthy areas of her brain – so-called “retractor-less surgery.”  This advanced approach minimizes surgical risk and allows patients to recover faster. Not every hospital offers such advanced surgical techniques, but Ada had chosen her medical team and hospital well.

Ada didn’t particularly want to spend Thanksgiving in the hospital, but she was anxious to get the surgery done, so the family gathered in New York that year. “Dr. Ramakrishna remembered we were from D.C., and he asked about it,” says Marisol. “He has so many patients, I couldn’t believe he remembered that. Little things like that make a big difference.”

“I was very scared before the surgery,” Ada says. “I’d never felt like that before – and I’d had surgery for breast cancer. I was terrified that I wouldn’t wake up. But I did, and it was like a miracle. Before the surgery I couldn’t even walk straight, I looked like I was drunk, and that was almost all gone. I didn’t even need physical therapy the way they said I might.”

Ada spent just a few days in the hospital, then went home to Florida. She says within two or three weeks she was starting to feel like her old self. Marisol remembers taking her mom out to lunch less than a month after the surgery, and being amazed at how well she was doing.

“An outcome like this is what we strive for with each and every patient,” says Dr. Ramakrishna. “While no operation is risk free, we take great care to ensure that patients are safe during and after their procedure. The idea of having brain surgery is frightening to anyone, of course. But given that we focus ourselves wholly on the treatment of brain and skull base tumors, we are confident our patients will receive the best possible operation and be safe at the end.”

Nine months later Ada was back in New York for a follow-up with Drs. Stieg and Ramakrishna, and to schedule her radiosurgery to remove the last fragment of the tumor. She feels great, and is grateful for the whole experience.

“From the minute you walk in the door here you find a team with a genuine interest in people,” she says. “We’re from out of town, and they were so helpful in finding accommodations, scheduling all our appointments together, everything to help. Everyone is so nice, even the people who did the MRI, they are all beautiful people.”

“The opportunity to take care of people like Mrs. Carmona and play a part in improving her quality of life is why I became a doctor,” says Dr. Ramakrishna “There is no better feeling.”