Nothing Prepares You for This: A Child's Brain Tumor

Philip Norton was all too familiar with what it was like to have a child with a serious health issue. For more than a decade, the single father from South Dartmouth, Massachusetts, had devoted himself to keeping his son Braiden healthy and happy, despite his having been diagnosed with a brain tumor as a baby. But nothing prepared him for what he and his son went through together in the summer of 2016.

It started when Braiden was just a year old and Phil noticed his eyes starting to drift. A CAT scan at a Boston hospital revealed a large mass on his brainstem that was pressing on the back of his eye and causing increased pressure in his brain. Braiden needed surgery to relieve the hydrocephalus right away; surgeons were able to remove 75 percent of the tumor during that operation. Tests showed it was a low-grade juvenile pilocytic astrocytoma (JPA) – a rare, benign, and slow-growing tumor – that was situated in a difficult-to-access spot in Braiden’s brain. 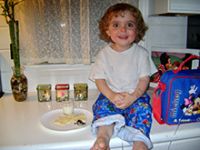 By age 2, Braiden was in a clinical trial that kept him tethered to his medication.

Over the next several months, unfortunately, the tumor began to grow back. This time doctors suggested chemotherapy, but Phil was determined to find an alternative. After weeks of research, he found a clinical trial in Houston that offered an experimental treatment that aimed to shrink Braiden’s tumor with minimal side effects.

For the next four years, Braiden received medication 24/7 through an IV infusion that Phil administered at home while staying in close contact with physicians. The treatment worked and the tumor shrank. Braiden led a normal and happy life, even attending kindergarten wearing a backpack that held his pump and medications.

Braiden learned to incorporate his meds into his everyday life.

When Braiden turned six, that treatment was stopped in the hope that the tumor was under control. To Phil’s dismay, the tumor started to grow again. By the time Braiden was 10 it was the size of a lemon and the pressure threatened to cause neurological issues.

Braiden underwent surgery again: a 15-hour long operation in Boston, in which surgeons were able to remove 25 percent of the tumor. Doctors there told Phil that further surgeries would be too risky. With the remaining tumor deemed inoperable and the experimental therapy no longer available, Phil had no choice but to have Braiden start chemotherapy. “I tried to remain positive, but my gut never let me feel good about it,” says Phil. “I knew too well what these conventional treatments do to kids.” 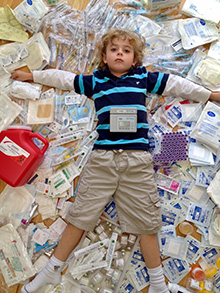 At 6, Braiden came off the trial, but his joy at giving up the medication was short-lived.

But a week before chemotherapy was to start, and a few days before Phil was to take Braiden on a surprise trip to Disneyland, Phil found a Facebook group for parents of kids with low-grade glioma that ended up changing his plans.

“I wrote a short post introducing myself and Braiden,” says Phil. “Within a couple of hours I received private messages from two mothers – one of whom was in Norway! – asking me if I had consulted with Dr. Mark Souweidane at Weill Cornell Medicine. Both of the moms said he was a global expert in pediatric brain stem tumor surgeries.”

Phil contacted Dr. Souweidane’s office immediately, sent Braiden’s scans to his nurse practitioner, Therese Haussner, and was soon on the phone with Dr. Souweidane himself about Braiden. “He said he had done surgeries like this before and didn’t think his tumor was inoperable,” says Phil. “He said he thought he could really help Braiden.” Cautiously hopeful, Phil took Braiden to see Dr. Souweidane in New York as soon as they got back from their trip.

Dr. Souweidane acknowledged that the tumor was in a tricky location, but he told Phil that he was confident he could get to it by using a slightly different approach than the Boston surgeons had used. Understanding that there was real risk involved, Phil decided to put his trust in Dr. Souweidane and decided to go forward with the surgery.

The operation was scheduled for June 28. Phil sat anxiously in the hospital waiting room during the 11-hour procedure with two close friends who had come to offer support. “Dr. Souweidane finally appeared, looking like he had just come off a battlefield,” recalls Phil. “But he was very calm, and said it went great, though it was a challenge. He said that he had removed about 90 percent of the tumor. We were absolutely beside ourselves.” 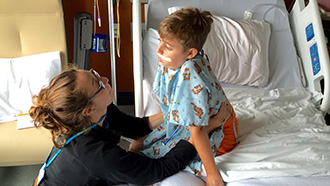 The after-effects of surgery are apparent in this photo taken on Braiden's first day in rehab.

The surgery had taken a toll on Braiden, however, and he remained unconscious in the ICU for days. Although doctors assured Phil that the condition was temporary and the symptoms would resolve, he was terrified. “I held Braiden’s hand for hours on end, talking to him, rubbing his head, playing some of our favorite songs quietly into his ear and waiting for a sign. But there was never a response from him.”

Dr. Souweidane remained confident that Braiden would make a full recovery, which helped Phil stay positive as well. “One day in the ICU I watched him lean over Braiden, take his hand and say ‘Braiden, this is Dr. Souweidane. I promise you that this will pass and you will get better,’” Phil recalls. “I wondered if Braiden heard him.”

Eight days after surgery Braiden was transferred to a rehabilitation hospital closer to home. Though he was stable, he still couldn’t talk, eat, or stand. But over the next 32 days he started to get better, first communicating with his hands, then uttering his first words and taking his first steps. By the beginning of August he was 95 percent recovered, and at the end of that month he was sent home to get ready to start fifth grade. “We were told that Braiden was one of the quickest recoveries they had ever seen from this,” says Phil. “Dr. Souweidane was right.” 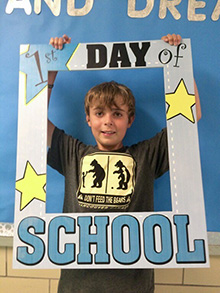 Less than two months after his surgery, Braiden started school again as if nothing had happened.

Phil teared up when he watched Braiden walk onto the school bus in September as if nothing had happened. “I told Braiden that he was free to tell people whatever he wanted about his summer – he could just say it was good, or he could say he had an 11-hour brain surgery that landed him in the hospital for 40 days straight and that he had to learn how to swallow, talk, and walk all over again,” says Phil.

Today Braiden continues to thrive. He plays basketball and piano and no longer needs physical or speech therapy. Phil stays in touch with Dr. Souweidane and Therese and emails them pictures of Braiden. “Not a day passes when I don’t think of this episode of our lives,” he says. “Amidst all the unknowns, I always had confidence in Therese and Dr. Souweidane and the rest of the staff in New York. Their confidence was deeply genuine and that was what I chose to hold on to.”

On the one-year anniversary of his surgery, Braiden and his dad sent Dr. Souweidane this video summarizing his journey: