Sarah and Doug DeMarrais never expected to become champions for Chiari — a condition they'd never even heard of until their daughter was diagnosed. Here is their story. 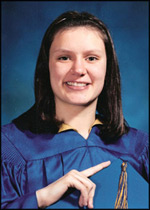 Our daughter Kelly was 12 years old and in the seventh grade when she first complained of pains in her head and some tingling and numbness in her arms. It was pretty sporadic at first, and we weren't terribly concerned — we thought she was having simple tension headaches, or perhaps she was dehydrated.

But her headaches became more frequent, so in December 2001 her pediatrician, Dr. Knoop, arranged for an MRI and a CAT scan. Dr. Knoop referred us to a neurologist, Dr. Waran, who reviewed the MRI and told us that she had a Chiari malformation. Dr. Waran suggested we contact Dr. Souweidane at the Cornell Medical Center for further evaluation.

We'd never even heard of Chiari malformation, so of course we were anxious. There was no one to talk to about it, and the little that we could find on the Internet was pretty scary. We made an appointment with Dr. Souweidane, and drove from our home in New Jersey to New York City for our consultation. Kelly felt an immediate connection with him.

Dr. Souweidane said that in addition to the Chiari malformation, Kelly had an "inversion" — a slightly abnormal angle to her cervical spine — that might complicate the Chiari surgery. In light of that, and given that her symptoms were generally mild, he recommended treating the headache pain and monitoring her condition for a while rather than operating right away. If her symptoms worsened and began to impact her quality of life, then surgery would be the appropriate remedy.

Over the next year and a half, the frequency and intensity of Kelly's head pains increased. We met again with Dr. Souweidane, who said at this point he believed Kelly's condition warranted decompression surgery. He said that successful surgery would allow Kelly to continue swimming, which she loved, and he now felt comfortable that the inversion would not affect the surgery. He also encouraged us to get second and third opinions before we made this important decision.

No matter who else we contacted, Dr. Souweidane remained our first and only choice to perform surgery should that become our choice, because of both his skill as a neurosurgeon and his strong connection with Kelly. The extensive networking he did, and the number of opinions he sought and encouraged, deepened our trust in him. Both of us and Kelly, as well as our extended family, were all confident in our decision to go forward with the surgery.

Kelly had just turned 15 and was heading into her sophomore year in high school when we decided to proceed with the decompression surgery. We opted to schedule it for the middle of July, when there was a break in Kelly's competitive swimming schedule as well as school vacation.

The three of us drove to the hospital on the morning of the surgery. Kelly was quiet, but she had been at the forefront of making this decision and was eager to eliminate her debilitating head pains. Of course as her parents we were nervous, but we wanted to present calmness and confidence to Kelly.

I (Doug) remember Kelly getting the nod that it was time for her surgery. They let me accompany her down to the operating room and stay with her until they began administering anesthesia. The operating room seemed cold and sterile, which it was, but Kelly's "let's get this done" attitude and our absolute belief in the skills of Dr. Souweidane allowed me to kiss her and leave the room confidently, knowing that she was in the best hands possible.

We knew the surgery would be long — nearly five hours — so we left the hospital and found a nearby Catholic church, where we lit candles and said some prayers. Back in the waiting room, we got periodic updates about how the surgery was progressing from a nurse — that was very comforting

Dr. Souweidane met with us right after the surgery to tell us that Kelly had done well. He told us he'd had to remove Kelly's first cervical lamina and part of the second in order for spinal fluid to move freely. When she came out of the recovery room we were allowed to see her – Dr. Souweidane was with us then, too. We weren't prepared for how swollen Kelly's face was, but given the trauma of surgery it was only natural that it would be.

By the next day Kelly was looking and feeling better, was sleeping less, and needed less pain medication. She began to have visitors as well. It probably took a week to 10 days for Kelly to start feeling like herself, and about two months for her pain to go away completely – we think she was trying to distinguish between her post-surgical pain and the headaches she used to experience. But in the beginning, she showed improvement every day and was itching to start swimming again.

Kelly was back in the water just two or three weeks after surgery, but she had to take it easy at first and not swim or practice hard. By mid to late August, around the fourth or fifth week after surgery, she began to use a kickboard. By early September she was back to practicing competitively — but she was not allowed to dive until October, three months after surgery. Less than a year after her surgery, she became the New Jersey State High School Champion in the 200 Freestyle.

But it was in November of that first year, just four months after the surgery, that we had a moment none of us will ever forget. We had told Dr. Souweidane about Kelly's upcoming return to competitive swimming, at a place called Asphalt Green in New York. Kelly's team had never swum there before, nor has it since, but fate had her return to swimming there — close to Cornell Medical Center and, as luck would have it, close to Dr. Souweidane's home.

It was a Sunday morning (which is probably Dr. Souweidane's only time off!), but he gave me his cell number and asked me to call him when we knew when Kelly was scheduled to swim. We knew how incredibly busy his schedule is and we had no expectation that he would come, but we did call to say that Kelly most likely would be swimming between 9:30 and 10:00 am. And at 9:15, Dr. Souweidane came walking in. Our friends and other parents couldn't believe their eyes.

Not only did Dr. Souweidane watch Kelly swim, he remained for some time after to talk to her. As he left, my daughter Grace, who is also a swimmer, ran out into the cold November day and said, "Dr. Souweidane — I just want to thank you for saving my sister and bringing her back to swimming." There was not a prouder or more thankful father to be found that day, and I believe that Grace's words and gesture had a similar impact upon Dr. Souweidane. 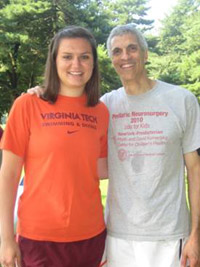 Kelly and Dr. Souweidane were reunited in June 2011 at the second annual Lids4Kids event in Central Park.

Kelly went on to become captain of the Virginia Tech Swim Team, where she still holds the team record in the 200 Backstroke. She earned Honorable Mention All-American when her 800 Free-Relay team finished 10th in the Nation at the NCAA meet. She is fully recovered and is in great health.

Over the years since the surgery, we've talked to other parents whose children are facing Chiari surgery (some children have contacted Kelly, too). As parents who have been through this, we try to ease their anxieties and tell them what they can expect as they work through the process. And always, we tell them about Dr. Souweidane, encouraging them to consult with him before making any final decisions, especially if they have any uncertainties about having surgery.