The Power of Positivity: A Brain Tumor Story

Rhys Gilyeat, 36, is a New York performer, musician, vocalist, and multidisciplinary artist focusing on illustration and mixed media. When he’s not performing or working on his art, he’s traveling internationally with his partner, Paul. “We’re obsessed with spending as much time in other places as we can,” says Rhys. “We tend to go off the beaten path, and just before all this we did a few months in Mexico until we returned to New York in July 2021.” By “all this” he means his tumultuous journey with a brain tumor — one with a happy ending thanks to the efforts of the multi-disciplinary team at the Weill Cornell Medicine Brain and Spine Center and NewYork-Presbyterian.

“In October of 2020, I got my annual eye checkup,” recalls Rhys. “I let them know that I was having slight blurry vision in my right eye. The doctor said that it could be due to side effects of medication I was on, so I wrote it off. And then over the next year, that eye started acting up more and more.” 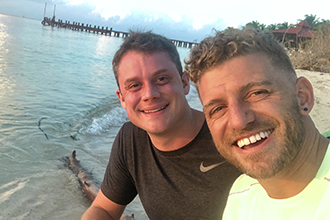 It was after their stay in Mexico that Paul became concerned about his partner. “He noticed unusual things: mood swings, that I couldn’t concentrate, misplacing things a lot,” says Rhys. “And then, a couple months later, I started getting headaches in the back of my head. My right eye kept getting worse and worse. I figured it was time to see what was going on.”

What Rhys experienced was typical for someone with a brain tumor. As a tumor in the brain grows, it can press upon sensitive areas and impede the brain’s function. For Rhys, the tumor developed in the vision area of the left side of his brain, causing that blurry vision. It’s easy to dismiss a single symptom, but as the tumor grows, it can affect the brain’s capabilities further, causing more disruptive and noticeable symptoms. That’s typically the time when patients go to a doctor seeking answers and solutions.

Rhys visited his optometrist, who suggested a visual field test. “I had to click a button every time I saw an object in my visual field, but I guess the results were not encouraging,” Rhys jokes. He took the results to his neurologist, who said it could be one of two things: a stroke or a tumor. Within 24 hours, Rhys was looking at scans showing a tumor in his brain.

“Hearing that I had a brain tumor… it was shocking,” recalls Rhys. “But I’m a good man in a storm. My partner went through testicular cancer four years ago, so I’m not unfamiliar with this. I had to stay positive. On a much larger scale, it was the same emotions, determination, and a general question: What do we need to do, and what do we need to get it done?”

The next step in Rhys’ journey, surprisingly, came via text. “The neurologist I met with in Queens asked if he could text a friend, who happened to be a neurosurgeon at NewYork-Presbyterian Queens. Within three minutes, the neurosurgeon's nurse practitioner called and asked if we could come to her office nearby in Forest Hills.” 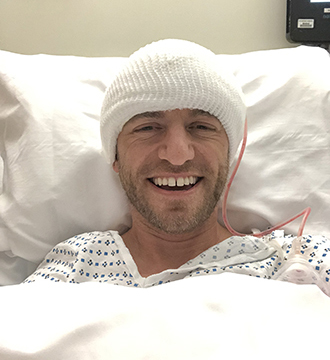 The neurosurgeon told Rhys that his tumor was large, about the size of a small orange, and it was most consistent with a primary brain tumor, meaning it likely originated in the area it was found in. It also looked like the type of tumor that starts on the covering of the brain and grows in. That’s good news – many times someone with a brain tumor has cancer elsewhere in the body that spreads to the brain, or tumors invade the brain itself. But the tumor was clearly aggressive and highly vascular, meaning it had high blood flow and was recruiting its own blood vessels as it grew. It was unsafe to embolize — meaning a neuroradiologist couldn’t obstruct its blood flow without risking a stroke. Surgery would require moving blood vessels around to mitigate the risk of bleeding, and to ultimately remove the entire tumor during surgery while keeping the brain and blood vessels safe.

Since Rhys lives in Manhattan, his surgery was scheduled at NewYork-Presbyterian/Weill Cornell Medical Center to make it more convenient for him and Paul, and for the follow-up treatments he would need. In the early morning hours of November 16, Rhys checked into the upper east side hospital. “I got lucky and got a window view of the East River,” he laughs. “I watched the sun rise, listening to ‘Are You Ready for Love’ by Elton John. It went by so quick. I went into the OR, Dr. Juthani performed the craniotomy, and she removed the whole tumor. That very night, I was singing along with Elton again!” 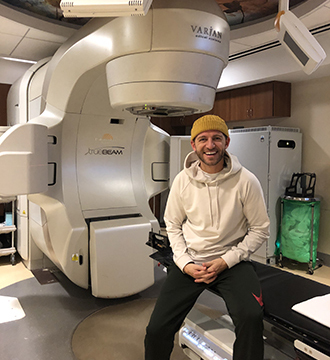 The tumor turned out to be a rare tumor called a hemangiopericytoma (also known as a solitary fibrous tumor). Rhy had radiation treatment at the site of the surgery to prevent the tumor from returning, and he is followed by a neuro-oncologist to monitor his progress, but his vision is back to normal. The convenience of having all his doctors available to him – in the borough that made sense for him, from the specialties he needs – has made this frightening experience easier for Rhys.

“For anyone else going through this, I believe that positivity will win at all times, end of story,” says Rhys. “The doctors have your back, so don’t be afraid to ask questions. They’re willing to talk to you, so don’t be afraid to ask. It helps alleviate a lot of creeping fear that might be there. If you go in with a smile, you’ll come out with one. And that’ll help you more than any medical situation can. That attitude will help you heal, get through, and help your doctors through it too.”

More about Brain Tumors in Adults