Sujin Jeong and her husband, Daeho Lee were living in New York and raising their two children, Theodore, 6, and Sophia, then three months old. It was a sunny April day when Sujin first thought that something was wrong.

Baby Sophia’s left hand had started shaking. Her right eye started to roll and her left side started twitching. It only lasted about 10 seconds, and then the baby seemed fine again. It happened again later that day, with the movements lasting only a few seconds before Sophia was back to herself. Sujin had thought she'd seen these mysterious brief spasms before; she was now concerned enough to make an appointment to see the pediatrician the next day. Before they even got to the doctor’s office the next morning the strange episodes had occurred again, about half a dozen times.

“I didn’t realize they were seizures,” Sujin remembers, but the pediatrician did, especially when Sophia had three more episodes in her office during the visit. The doctor called 911 so the baby could be taken by ambulance to the emergency room at NewYork-Presbyterian/Weill Cornell Medical Center.

Sophia was admitted to the hospital and stayed in the hospital for several days while she underwent video-EEG monitoring to provide more information about these events. Based on the results, she was diagnosed with infantile spasms and focal seizures that came from the right parieto-temporal occipital area of her brain. An MRI scan showed a cortical malformation in that same region. Dr. Srishti Nangia, a pediatric epileptologist (a neurologist specializing in epilepsy) diagnosed Sophia with early infantile epileptic encephalopathy (EIEE, also known as Ohtahara syndrome). Sophia then had genetic testing, which revealed a pathogenic mutation in the DEPDC5 gene — a genetic mutation that has been associated with cortical malformations.

Dr. Nangia prescribed anti-seizure medications, which were effective at getting Sophia seizure-free. But since these medications have potential cognitive effects and other developmental delays long-term, Dr. Nangia referred Sophia to Dr. Caitlin Hoffman, a pediatric neurosurgeon specializing in epilepsy surgery. Drs. Nangia and Hoffman often work together to treat children whose seizures are focal in origin, since there are new surgical options that can actually cure a child’s epilepsy. 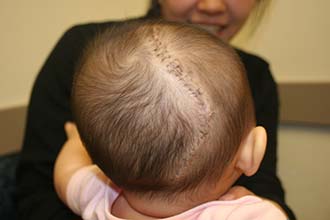 “Sophia was an excellent candidate for surgery,” says Dr. Hoffman. “All the testing we did pointed to a single region of abnormality in her brain that was causing the seizures. At such a young age, where it’s so clear that there is a lesion causing the seizures, surgery to remove that lesion is the best way to protect the child.  Surgery would eliminate the source of Sophia’s seizures as well as reduce her exposure to chronic side effects of anti-epileptic medication, therefore allowing her to develop and grow without these risks and threats to her cognition and brain development.”

“I had no idea about what epilepsy was,” says Sujin. But during the five days that Sophia was being monitored in the pediatric ICU, Drs. Nangia and Hoffman were spending time with Sujin and Daeho so the worried parents could learned more about their daughter’s condition. Over those days, Sujin says, they came to know and trust these two experts, and they decided to entrust them with their baby’s care. They agreed with the doctors’ recommendation, and decided to move forward with the surgery. 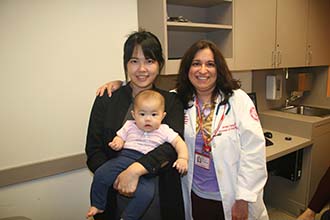 Sophia had the surgery at 6 months of age.  Sujin and Daeho were nervous about it, of course, but their trust in Drs. Nangia and Hoffman helped them cope with their stress. Sujin remembers that the doctors were very confident about the surgery, which helped her and Daeho get through the nine hours they spent in the waiting room while Sophia was in surgery.

“It’s a complex procedure,” says Dr. Hoffman, “and of course all parents worry about their child having surgery, especially brain surgery. But we do these advanced procedures on a regular basis. Sophia did just beautifully – we were able to remove the lesion that was causing the seizures, and we were confident that the surgery would eliminate her epilepsy.”

Sophia is now a healthy 22-month-old and her parents, while still concerned for their daughter’s development, are very happy with her progress.  She remains seizure-free. Sophia was on three antiepileptic medications prior to surgery, and she is currently being weaned off the last one. Sophia continues to make developmental gains.

For other parents considering epilepsy surgery for their child, Sujin has some advice: “If it is the best option for patients, I would definitely recommend surgery. I really appreciate the sincere care I received from the team at Weill Cornell.”

Find out more about epilepsy in children