Triumphing Over the Suicide Disease

The pain is often unpredictable and severe. The diagnosis can be elusive. Some call it the “suicide disease” and Kristin L. Fletcher knows why: “You can’t live with the pain trigeminal neuralgia brings.”

But the 66-year-old retired attorney from Wilmington, Delaware, is living without pain today, thanks to a surgical procedure that stopped the pain. The surgery was performed at the Weill Cornell Medicine Brain and Spine Center by neurosurgeon-in-chief Dr. Philip E. Stieg.

It’s a happy ending to a story that began in July 2017, when Kristin felt a sharp pain in her mouth. It went away, and Kristin says she “basically, ignored it.” A few months later, while on vacation in Florida, the pain came back – it became severe, but intermittent. Maybe it was allergy- or sinus-related, she thought. Over-the-counter medicines didn’t help.

Her vacation ended, but the pain did not. In fact, the pain became more intense and more frequent when she was back home in Wilmington. This active woman – whose full life included going out to dinner with friends, attending sporting events and the theater, and traveling – gradually “just shut down.”

“I stopped going out or even being with friends. I never knew when the pain would hit or how long it would last, and it was just too much to explain to someone,” she recalls. “Just the anticipation that an attack could occur would keep me from being social.”

Trigeminal neuralgia (TN) is a chronic condition that causes intense facial pain, usually down one side of the face. It makes sense that Kris, like most people who experience that pain, first turned to her dentist to discover what was going on. “My dentist thoroughly examined my mouth, jaw, teeth and took X-rays. He found nothing wrong.”

Relieved that the problem had been identified and named, she did more research. She was not thrilled at the long-term prognosis. “I researched online as much as I needed to without going overboard,” she says. “I joined the Facial Pain Association (FPA) and had good discussions with my neurologist's PA. I learned about the different surgical options.”

Since some patients can control their pain with medication, Kristen was prescribed Oxcarbazapine, which worked well for a few years to keep the pain and attacks at bay. Her dosage was gradually increased and “I was able to cope, but I really did withdraw from most social activities.”

In the fall of 2020, it was clear the medication wasn’t hit wasn’t helping enough. By December she was taking 2400 mg of Oxcarbazapine each day, yet the attacks of facial pain were more frequent and random.

“The pain was beyond intense,” she recalls. “I totally understand why they call trigeminal neuralgia the ‘suicide disease.’ I have a very high threshold for pain, but even I began telling myself (and several close friends) that if the meds failed and surgeries didn't help, I would go into the woods and end it all.”

Obviously, it was time to turn to surgery.

A friend at the Brain Tumor Foundation, Gerry Napoli, told Kris about Dr. Stieg and offered to help make the connection. “I researched Dr. Stieg and the Weill Cornell Medicine Brain and Spine Center and decided to take Gerry up on her offer,” Kris said. “I also have an apartment on East 70th Street in Manhattan, so it seemed like fate that Dr. Stieg’s office and the hospital were right at the end of my block.”

Kris found Dr. Stieg “surprisingly down to earth, humorous, engaged, and willing to answer my questions.”

Of the various surgical options for TN, microvascular decompression (MVD) seemed to make the most sense for Kris. It involves moving or removing the blood vessels that are creating pressure on the trigeminal nerve and causing the excruciating pain. 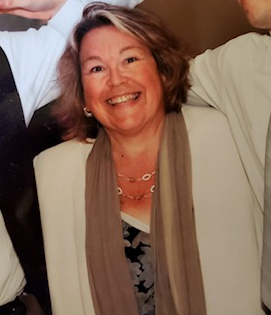 “Due to my love of all things medicine (I'm a wannabe doctor), Dr. Stieg even put up with my desire to look at the MRI and see how the vessels were affecting the nerve,” Kris says. “And once Dr. Stieg explained his success rate and the longevity of the MVD treatment, I was convinced that was the only option for me.”

Since the facial surgery would take place under her hair and behind an ear, she had no concerns about scarring. “I don't experience a lot of the anxiety that many people do with medical procedures,” she says. “Before my knee replacement surgery a few years ago, I watched a YouTube video of the operation and was fascinated. Likewise, I found a video of the MVD surgery and watched that was well! It was amazing, but I wouldn't recommend it to people unless they know it won't freak them out.”

Kris did have a little trepidation about her own surgery, mostly due to her age and a family history of strokes. But all went well.

“I also can't say enough things about Dr. Stieg’s staff. Every step of the way they were helpful and pleasant, especially having to coordinate doctor visits and exams results between Delaware and New York. I must especially call out Darcelle Benjamin-Smith — I think we became BFFs after all the help I needed from her, which she cheerfully gave!

What advice would she give to someone just diagnosed with trigeminal neuralgia? “Talk to someone who has undergone the same procedure. Interview doctors, and research medical facilities to make sure you feel comfortable with your choices,” she says.

Recently, Kris was asked to meet with a person who has suffered from TN for more than seven years. “I was able to show her that I was fine after the surgery, with no impairments. I talked her through all the testing and answered whatever questions I could. I recommended she meet with Dr. Stieg and form her own opinion.”

The friend agreed to the surgery, which Dr. Stieg performed on August 14.

“She is doing well,” Kris reported. “When she said she cried the first time she brushed her teeth without pain, it made me cry as well, as that was one of my pain triggers, too.”

“Today, I am completely off the medication and thank God I am pain free!”

Find out more about trigeminal neuralgia

Find out more about Dr. Stieg