Lauren Babjak, better known to her more than 300,000 YouTube subscribers as “eLL cartoons,” is a 30-year-old animator from Tinton Falls, New Jersey. Based on her lighthearted stories, you wouldn’t think she’d recently faced an ordeal fewer than 1 percent of Americans have to deal with: a brain tumor. In “My Scary Hospital Visit,” now with nearly 2 million views, Lauren recounts how some splitting headaches, originally dismissed by doctors, eventually led to a brain tumor diagnosis. But thanks to Dr. Theodore Schwartz and his team at and Weill Cornell Medicine and NewYork-Presbyterian, Lauren’s headaches are gone and she’s back to making videos.

Lauren had left home in 2013 to study animation at a college in California. “Out of nowhere, I started getting these headaches,” she recalls. “Each one felt like I was getting hit in the head with a bat. It was unbearable.” They were so painful that she couldn’t animate or do anything at all. “Every movement of my head caused it to hurt. I turned to hot showers to distract me from the pain, lay in bed trying to rest. It affected every aspect of my life.”

Unable to withstand the pain, Lauren took the bus to the emergency room. “Each bump in the road made my head hurt even more,” she recalls. “And after a long wait in the emergency room, the attending doctor ordered a CT scan.” To Lauren’s surprise, she was told that there wasn’t anything wrong with her. She remembers the doctor’s indifference, and how she was told it was just a tension headache. She suffered excruciating pain for another week before returning to the emergency room, sure that something was wrong. This time a doctor ordered an MRI; after that his tone was more serious. Lauren had a dermoid—a benign brain tumor.

Lauren says she was actually glad to hear it. “After all that time of being told nothing was wrong, I had a diagnosis,” she says. “I was just relieved that there was a way to remove the pain and that we could do something.”

After flying home to her family in New Jersey, Lauren had to take the next step in finding someone who could treat her tumor. Lucky for her, an aunt had some experience with neurology and had a neurosurgeon in mind. Lauren recalls, “she just said he was really good.” That was Dr. Theodore Schwartz.

Lauren’s tumor was located in the part of the brain that controlled her left eye. As the tumor grew, it would touch the nerve, causing the burning, shooting, stabbing sensations that Lauren felt, and making the surgery more delicate. “One wrong move on our part could damage the left eye nerve — she risked losing her vision,” says Dr. Schwartz. “Because of the location of the tumor, we had to be careful. We couldn’t remove it completely, and that risks regrowth. But Lauren couldn’t continue to live with this pain.” Dr. Schwartz decided to use endoscopic endonasal surgery to reach the tumor by way of the nostrils.

“We’ve made great progress in using new technology and techniques to improve patient outcomes,” says Dr. Schwartz. He specializes in a minimally invasive surgical approach that uses a small, flexible, lighted tube called an endoscope to visualize parts of the brain. By threading this endoscope through a small opening, he’s able to extract the tumor from the brain. This faster, simpler endoscopic procedure greatly reduces post-operative complications and results in faster recovery, less pain, and less scarring.

The day of the surgery, Lauren took solace in knowing she was in Dr. Schwartz’s capable hands. “Reading all his achievements I felt really confident in him. I would say it feels really good knowing that you’re in the hands of someone who knows what they’re doing… and who is a really good person.”

Later that morning, Dr. Schwartz threaded an endoscope through Lauren’s nose and watched its progress on a nearby monitor as he removed the tumor. Looking back, Lauren remembers waking up in the recovery room and feeling relief. “In terms of side effects, I remember there were a lot of nosebleeds. I also lost my sense of smell for a good two or three months but it returned.”

After six years, though, Lauren found herself back in the emergency room with another severe headache. This time, she didn’t feel relief when the results came back: the tumor had regrown. She panicked. “I didn’t think the tumor was going to come back. But thanks to the support system I had — the most incredible family and friends — they uplifted me and made me smile. It’s not bad with people like that.” 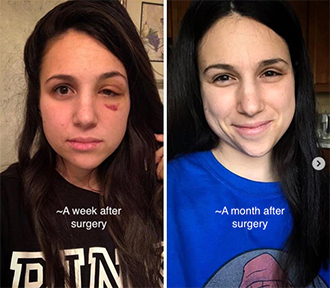 A week after surgery, Lauren says she looked like she had been run over by a truck. A month after the surgery you could not tell she'd had surgery at all.

Thankfully, she knew just who to reach out to. “I really like Dr. Schwartz a lot,” says Lauren. “Every time I talk with him he always makes me feel comfortable!”

This time around, they both decided to enter through an incision in the upper left eyelid. Choosing this approach stemmed from her experiences from the previous surgery. “Going through the nose last time, I had recovered,” Lauren says. “But I didn’t want to risk losing my sense of smell. I was worried that another operation in the same area would render my senses gone.”

After the surgery, Lauren went through the now-familiar recovery process. “My eye looked like I got run over by a truck,” laughs Lauren. “I made the video as I was recovering, I was really emotional about how I looked; I didn’t know how my eye would recover.” Lauren says her humor and outlook made it easier to get through the recovery period. “It was an emotional rollercoaster,” she says.

Lauren sometimes finds herself reflecting about how fortunate she is after the surgery. “When I have a moment where I think about wishing I could open my eyes evenly… I have this reaction that takes over and says ‘What are you talking about? You could have been dead!’ The fact that I’m alive right now is a miracle. I’m healthy, and I’m super, super grateful and I don’t play these games where I feel sorry for myself.”

For anyone going through the same thing, she offers a memory from her first surgery. “A nurse at NYP said this to me in 2013: ‘One day this is going to be a thing from the past. You’ll be in a different stage of your life and you won’t remember half of what you’re going through.’ And she was right! Six months later, it was a thing in the past. I forgot I even had surgery this year. So I’d say to you what the nurse said to me. That you’re going to be okay.”