Three-year-old Olivia Wai, from Fresh Meadows, New York, seemed like a perfectly healthy toddler. She’s an exuberant child — she loves to play music, dance, and play pretend with her little brother, Kingston. Her parents, Joe and Jenny, dote on her and relish their daughter’s fun-loving personality. She was happy and healthy — what more could a parent want?

The Wai family’s lives changed one night when Olivia experienced a seizure. “My parents were staying with us one night and Olivia slept next to them,” Jenny remembers. “They heard something in the middle of the night.” Jenny’s parents weren’t sure what happened — it was dark and they had never seen a seizure before. “But the way they described it,” Jenny says, “I believe she had a grand mal seizure.”

A seizure occurs when normal electrical patterns in the brain become disrupted, and the type of seizure depends on which area of the brain is involved. There are a number of reasons why a child may have a seizure, but repeated seizures, as Olivia starting having, lead doctors to diagnose a patient with epilepsy. The grand mal seizures that Olivia was having, also called generalized tonic clonic seizures, cause violent muscle contractions and a loss of consciousness. Grand mal seizures are what people usually think of when they envision a seizure — the child drops, shakes, and loses consciousness.

Jenny and Joe were astonished as well as worried. “She seemed fine when she was younger — we didn’t think anything like this would happen to her,” Jenny says. The surprise is understandable: According to the CDC, only 2% to 3% of the population in the United States have active epilepsy. Still, that amounts to 3 million adults and 470,000 children affected by epilepsy. (See the CDC Epilepsy Fact Sheet)

The family took their little girl to see a neurologist, who gave Olivia medication to control her seizures. Olivia did well during the day, but the seizures would still come as she slept. After a year, the medicine’s effectiveness waned — Olivia’s seizures became more frequent and increased dosages did not help. “We were more concerned about her future as she grew older and how things would be different or harder for her,” Jenny says. On the advice of their neurologist, they scheduled a consultation with neurosurgeon Dr. Caitlin Hoffman and neurologist Dr. Srishti Nangia at Weill Cornell Medicine and NewYork-Presbyterian.

“We had to make the seizures stop,” says Dr. Hoffman. “Over time, repeated uncontrolled seizures do damage to the brain. Even if the seizures seem mild, the risk of brain damage over the years accumulates to a point where it impairs the child’s cognitive or physical functions. This damage results in delays or, worse yet, regressions in the child’s development.” 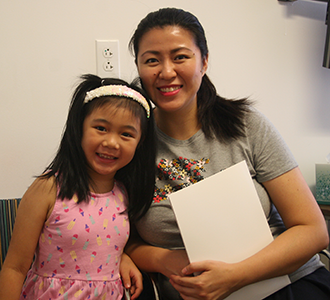 Olivia with her mom

Surgery became the only option for Olivia to safeguard her cognitive development. “When medication loses its efficacy, it’s up to the family to consider surgery. The goal of surgery here is to eliminate or reduce seizures in children to allow for improvement in their functional development,” Dr. Hoffman says. “Surgery can result in freedom from seizures, but this is primarily a case of improving her quality of life and development.”

Joe and Jenny both felt some hope. “The medication was ineffective. And seeing her having seizures many times at night was difficult not just for us, but for her as well,” Jenny recalls. “Dr. Hoffman gave us the confidence to go through with our decision. As a parent, you hope you’re making the right choice. We felt like we were doing something good for her.”

Olivia went in to the hospital for the surgery on a warm August day. She was scared, but after Jenny let her know that the seizures might go away, she felt optimistic. “She was so little, I don’t think she truly knew what was going to happen,” Jenny remembers, “but we just tried to have as much fun together and not really think about it.”

Olivia doesn’t remember anything from the surgery except the toys she played with in the hospital, and by looking at her you would never know she’d been a patient. Jenny remembers it well, though. “She actually handled the pain well and she was walking by the second day. She had no bruises and she healed so well!” Olivia recovered so quickly that she was up and running a week after surgery and finished her physical therapy in three months.

These days Olivia is catching up on all the sleep she missed — 10 hours a night to be exact — and Joe and Jenny are both more rested now that they’re not monitoring for a seizure every night. And now that they’ve seen what surgery can do, they both feel that they made the right decision for their daughter. Jenny says, “This was like a miracle for our family, and we hope the same miracle will happen to anyone going through this too!”