"We Couldn't Stop Staring at Him!"

Leo had always been cutie pie, but once his craniosynostosis had been corrected he had "a perfect round Charlie Brown head."

For Pam and Steven Schwadron, the hours following the birth of their son Leo were a blur. After an emergency C-section, the baby was whisked into the examining room while Pam lay ill in her hospital bed, having had a bad reaction to the anesthesia, with Steven at her side.

It wasn’t until 24 hours later, when they were approached by Dr. Mark Souweidane, pediatric neurosurgeon at Weill Cornell Medicine, that they were able to take in the terrifying news. Leo had been born with craniosynostosis, Dr. Souweidane gently explained, a condition in which the bones of the skull fuse prematurely and cause a visible deformity.

Normally, the individual bones of the skull fuse together between the ages of one and three, Dr. Souweidane explained. That allows time for the skull to expand to accommodate the rapid growth of the brain in the first years of life. But in Leo’s case, a connecting tissue called the metopic suture, which runs from the top of the skull down the center of the forehead to the nose, fused early, resulting in a triangular shaped forehead known as a trigonocephaly.

But there was good news. Leo’s condition was not syndromic, Dr. Souweidane assured his parents, meaning that it wasn’t part of some larger syndrome that would affect Leo’s health. In other words, Leo had normal brain function and would almost certainly be okay. But he would need major surgery to remove the closed suture and correct the skull’s deformity, ideally within the next few months. Without it, his brain would not be able to expand and grow normally. 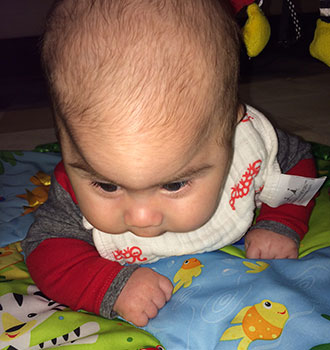 Overwhelmed and frightened, Pam and Steven started doing their own research on metopic craniosynostosis. The more they read, the more anxious they became. Pam turned to Dr. Souweidane for reassurance again and again. “His bedside manner was amazing and comforting,” she said. “And when it came to making a decision about surgery, it was surprisingly easy.”

Dr. Souweidane outlined two options for removing the suture: One was a new endoscopic surgery that was minimally invasive, but would have to be done very soon and would require Leo to wear a cranial remodeling helmet for a full year afterward to help reshape his skull. The second option was the more traditional open surgery in which the suture would be removed and the skull remodeled. Open surgery and its recovery time both take longer, Dr. Souweidane explained, but they could wait longer to do it, and helmet therapy wasn’t necessary afterward.

To help them make a decision, Pam asked Dr. Souweidane what he would do if Leo were his child. “He responded ‘open’ due to the fact that it was tried and true,” she recalls. Pam and Steven also preferred the option that would put them problem behind them with one surgery, without a year of helmeting.

The date for the surgery was set for six months away, with one major caveat: Leo had to be completely healthy on the day of the surgery or it would have to be postponed. Over the next few months, every sniffle and sneeze at home had Pam and Steven on edge. “Keeping Leo healthy was tough because it was winter and his five-year-old sister, who was in school, was sick a lot,” Pam says.  “She had strep about seven times! The emotional preparation was as hard as anything else.”

Finally, with great relief, Leo went into surgery healthy and right on schedule. During the nine-hour procedure, Pam and Steven waited patiently for word on their son’s progress. Doctors checked in with them regularly to tell them all was going well, but time moved slowly. “The surgery ended up being on the long side of the range they’d given us,” Pam recalls. “And at first they’d said Leo wouldn’t need a blood transfusion, but then it turned out that he did. But we had such great faith in the doctors that we were really remarkably calm. I think mostly it was because the anxiety leading up to that day had been so great, that we were so glad it was finally going to be over.” 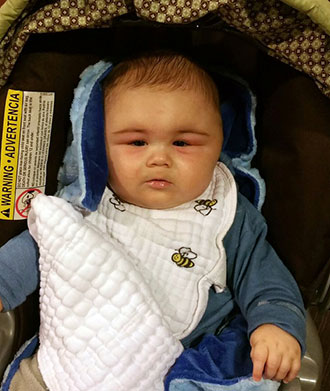 Leo on homecoming day, after four nights in the hospital

Upon seeing their son in the recovery room, tethered to IVs, his head bandaged, and his eyes swollen shut, Pam immediately burst into tears. “He was so swollen from the fluids, he looked like a five-year-old in that bed, it was almost comical,” she says. “But to see your baby like that, with the swelling and the bandages, and we were just so overwhelmed – I started crying right away. I could cry now just thinking about it.

“The first 24 hours were hard – mainly because we had no way of knowing how Leo felt and there was definitely a lot of moaning and a moderate amount of crying,” Pam recalls. “That’s when I would really get upset. But the hospital staff was so good about pain management. Any time he cried out, any time it seemed as if he were in pain, they’d be ready with medicine for him.”

Pam and Steven had been warned that Leo’s eyes would be swollen shut for several days after the surgery, but it was still hard for them to see their baby that way. “I was so afraid he thought he was blind, and that this was his new normal,” says Pam. “The hardest part was that he didn’t understand what was going on, and we couldn’t explain that it was temporary.”

But Leo bounced right back, smiling and giggling even with his eyes shut, and ready to nurse. (“He’s a big guy!” says Pam. “He wanted to eat!”) The bandages came off on the second day, and on the fourth day Leo opened his eyes, earlier than Pam and the doctors expected. After Leo’s fourth night in the hospital, the Schwadrons took their son home.

“His eyes were little slits, but they were open and he didn’t even have a bandage on,” says Pam.  “And it was amazing to see the change in his appearance. The results were immediate – he was always cute, but now he had this perfect round Charlie Brown head, and we just couldn’t stop staring at him.”

Leo recovered quickly, and within the week he was his old self. Pam and Steven were relieved to get back to normal, or what Pam calls “a better normal – this time without the dread of upcoming surgery.” 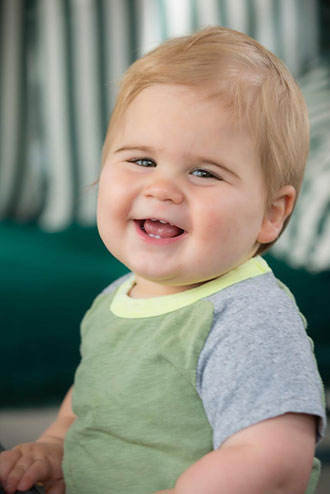 The experience was easier than Pam and Steven could have ever imagined, especially compared to another family they got to know through Leo’s pediatrician, whose child also had surgery for craniosynostosis. “That baby was treated at another major medical center and had a much harder recovery and experience in general,” says Pam. “It actually scared us quite a bit. But in a way, it was perhaps a positive because our expectations were for a much harder, longer road to recovery than what we actually experienced.”

Today Leo is a happy and healthy toddler with a big appetite and a laid-back personality – something Pam believes helped him (and his parents) get through the immediate days after surgery. His scar is almost completely invisible. “If you dig around under his hair you can maybe see a tiny line,” says Pam, “but nobody else would ever notice it. Maybe someday when he’s a bald old man you’ll be able to see it, but even then I doubt it – it’s practically non-existent.”

Pam and Steven couldn’t be more grateful to Dr. Souweidane and his team for their compassion and support. “We liked Dr. Souweidane right from the get-go,” Pam says. “He was patient, calm, sincere, and trustworthy. I can’t imagine going through this with any other doctor.”

More about our Craniofacial Program