A 'Win' Against Craniosynostosis

At age nine months, John “Win” Melvin loved swings, dropping things into buckets, and bathtime!  Lovingly referred to as Win (short for his middle name, Winifred, a family name), the little boy kept his parents, Rory and Mimi, hopping – and they wouldn’t have had it any other way. They were completely unprepared for a diagnosis of craniosynostosis, but thanks to Dr. Caitlin Hoffman, they soon had their happy baby back – better than ever.

Craniosynostosis, which occurs in one out of 2,000 live births, is caused when the individual bones of the skull fuse too early. An infant’s skull is made up of five separate plates, joined by flexible bands called sutures that allow the skull to expand to accommodate rapid brain growth. When the brain reaches its full size, the sutures harden and the plates fuse. If one or more of those sutures hardens too early, the brain cannot expand normally in all directions. This results in a misshapen skull as the brain grows and expands, and in severe cases it can hinder cognitive development.

Win showed no visible symptoms, but at his nine-month well-baby visit, the pediatrician noted that Win’s fontanel (the “soft spot” at the top of an infant’s head where the unfused plates are most obvious) was hard and he had a ridge on his skull.  The sagittal suture, the suture that separates the right and left sides of the skull, had fused early, causing an abnormal skull shape. Suspecting sagittal synostosis, the pediatrician recommended that Roy and Mimi take Win to see Dr. Caitlin Hoffman at Weill Cornell Medicine and NewYork-Presbyterian – immediately.

Mimi and Rory were concerned, of course, but they thought they would check in with Dr. Hoffman at the hospital and quickly return to their regularly scheduled lives. “We thought he would be fine,” Mimi remembers. But the neurosurgery resident who saw Win first at the hospital seemed concerned, which worried them.  “We could tell immediately that he was concerned,” Mimi said of the resident, “But we weren’t really sure.” Once Dr. Hoffman came in, she confirmed the diagnosis and told the couple that their baby needed surgery. Due to his age, Dr. Hoffman recommended surgery soon.

There are multiple surgical options for treatment for craniosynostosis. In children under four months of age, a minimally invasive endoscopic approach can be used. That option relies on several months of rapid brain growth after surgery to remodel the skull (infants wear a helmet after surgery, usually until about their first birthday, to guide the shape). At nine months, Win was too old for this option. Dr. Hoffman told his parents he would need traditional open surgery, called cranial vault remodeling, which involves removing the closed suture and reshaping the skull. 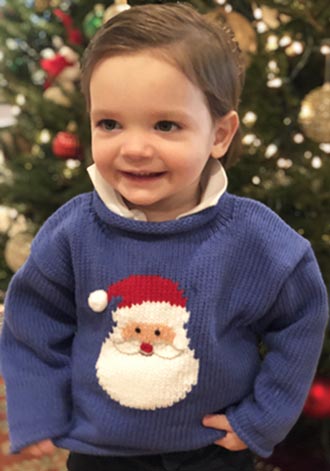 The Melvins, still trying to reorient themselves given this sudden turn of events, next met with Dr. Thomas Imahiyerobo – or Dr. I, as patients call him – the plastic surgeon who would work with Dr. Hoffman reshaping Win’s head during the operation. “He was super helpful,” Mimi remembers, noting that she and Rory walked away still in shock, but confident that Dr. Hoffman and Dr. I would take great care of their son.   “We felt that since we were at Cornell we didn’t need to go anywhere else or get a second opinion,” Mimi recalls.

Dr. Hoffman ordered a CT scan to confirm her suspicion of sagittal synostosis. Win did a great job of staying asleep during the scan, and Mimi and Rory were grateful to the patient radiology technologist who patiently waited for him to be ready. The CT scan confirmed Dr. Hoffman’s diagnosis and the surgery was scheduled for the following Monday.

On the day of surgery, the Melvins walked the short distance from their home to New York-Presbyterian Weill Cornell Medical Center. After Win was admitted and prepped for the procedure, Dr. Hoffman and Dr. I walked the family to the operating room, where Mimi and Rory held Win as he was administered the anesthesia. Then it was back to the waiting room for the six long hours of surgery.

The surgery went well and Win was admitted to the pediatric intensive care unit to begin his recovery. Rory and Mimi had been prepped by Dr. Hoffman that he would be swollen but were still surprised at how swollen -- he couldn’t open his eyes. “It was scary,” Mimi remembers, “but by the third day he turned the corner and his eyes started to open up again.” Win started looking and acting more like himself as the swelling went down, and he no longer needed pain medicine. It was then that his parents’ concerns started to melt away and they knew he was going to be fine. They took him home on Friday, just four days after surgery. By Sunday night — less than a week since the surgery — Win was totally back to himself.

It was a whirlwind week and a half for the Melvins, and they were so thankful for the support they received. “For a bad situation, we had the best experience we could have had with Dr. I and Dr. Hoffman,” says Mimi. “They were both so wonderful and made us feel that Win was in the best hands possible.”

For other parents going through the same thing, Rory and Mimi have one thing to say: “It’s really scary, but it’s going to be a bad week and then it’s over.” As for baby Win, he’s growing up fast and not letting his head surgery get in the way. Mimi says, “He’s trying to jump from our coffee table to the couch now — we’ll have to take him back to Dr. Hoffman if he keeps at it!”