A Worsening Whoosh, Then Relief

Jarrod San Angel, 45, of Long Island City, Queens, is a senior academic advisor in student advising services at LaGuardia Community College and has a rich, full life: he loves to travel and sample new cuisines, write music, and attend concerts. Yet in the background of all those wonderful experiences was something that had nagged at him for almost 20 years: a whooshing sound in his left ear.

“It feels like a lifetime ago,” Jarrod says. “I started hearing it as far back as 2003. I dismissed it at first, thinking that it would go away on its own.” He had learned to live with it, but when it recently got worse Jarrod sought out Dr. Srikanth Boddu and his team at Weill Cornell Medicine and NewYork-Presbyterian. Today the whooshing is gone and Jarrod is glad he made that call.

“The whooshing wasn’t continuous or consistent at first,” he recalls. “It would come and go, but it would primarily surface at night whenever I would lie on my left side. I started lying on my back or on my right side to avoid hearing it. Hearing the whooshing in sync with my heartbeat made me feel antsy. It all made sleep so challenging.”

Then the whooshing suddenly worsened, and Jarrod started hearing it during the day. “It became louder and more frequent,” he says. “The whooshing went beyond my sleep and into my daily life: sitting down on the sofa, sitting at my desk at work. It became more irritating than it had been before. It was worrisome, and it gave way to more anxiety.”

“The whooshing sound is a notable symptom of pulsatile tinnitus,” says Dr. Boddu. “The key to ending the intrusive sound is identifying the underlying condition. When we look at patients’ scans, one of the things we look for is venous sinus stenosis — a narrowed vein in the brain. This vein narrowing almost always happens behind the ear. As the blood flows across the narrowed vein, it causes a turbulence in the blood flow, which manifests as the whooshing sound patients hear. For patients in the same boat as Jarrod, it’s an annoyance. But as he and many other patients experienced, the symptoms can worsen and greatly impact their lives.”

Jarrod decided something needed to be done, but he found that most doctors dismissed his symptoms as just a quirk.  “I had to be my own advocate,” he says. “I did online research and learned about pulsatile tinnitus, what can cause it, and in particular, more about venous sinus stenosis.”

“I’ve seen many patients with pulsatile tinnitus because I treat it, but it’s rare,” says Dr. Boddu. “Tinnitus itself is a common condition that affects ten percent of the world population, but pulsatile tinnitus only makes up one percent of that group. As a result, Jarrod’s experience with his doctors is one we hear often — most doctors don’t have the training to diagnose it. I can understand the patient’s frustration of being bumped from physician to physician and being told “you have to learn to live with it” or “there is nothing wrong with you, it’s all just in your head.” In fact, they are right! The problem is in the patient’s head – it just didn’t get diagnosed! At Weill Cornell Medicine, we’re very familiar with pulsatile tinnitus and its symptoms. We strive to pass that knowledge on to other doctors so that experiences like Jarrod’s become less and less common.” 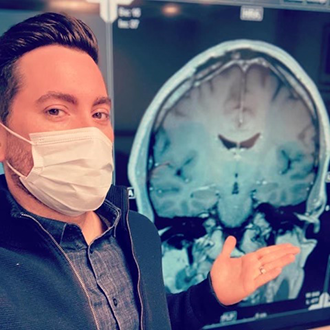 Jarrod's scans revealed the source of the whooshing

“Right after I learned about pulsatile tinnitus, I contacted my primary care physician for a referral to Dr. Boddu,” says Jarrod. “What struck me immediately was that he ordered scans. No other doctor I’d seen had done that; they just told me not to worry. Dr. Boddu was the only one to take it seriously. He was the first to hear me out, and through his expertise, he helped me learn and understand more about pulsatile tinnitus and venous sinus stenosis. Most importantly, he helped me get a better understanding of the treatment that would get this taken care of.”

Venous sinus stenting (VSS), a procedure pioneered at NewYork-Presbyterian/Weill Cornell Medical Center, offers relief to patients experiencing pulsatile tinnitus (see A Decade of Successful Stenting). “The procedure aims to relieve the narrowing in the affected vein,” says Dr. Boddu. “We start by accessing vein in the arm or leg with a needle and then thread a catheter through the patient’s veins up to the brain. From there, we deploy the stent to expand the narrowed vein and restore normal blood flow. It’s a minimally invasive procedure, which is beneficial for the patient. Minimally invasive access through a needle, as opposed to drilling through the skull, means less recovery time; the patient typically gets discharged later the same day or the next morning.”

VSS may be routine for Dr. Boddu, but he understands that it’s far from routine for his patients, especially for Jarrod, who had had previous experience with brain surgery.

“In 2018, I was diagnosed with a type of brain tumor: a meningioma,” Jarrod says. “It presented itself in a grand mal seizure. I went to the ER and that’s how they discovered it. It was, somehow, less scary than this. The thought of the catheter going up my body sounded scarier than someone going through my head and patching me up. But Dr. Boddu was reassuring. He was very thorough in explaining what would happen during the surgery, and he validated what I was feeling. I felt that he was, in his nature, patient, and compassionate — he was very understanding about my trepidation through this process. When the day of surgery came, his team of PAs and nurses were really warm and friendly; it felt really good.”

A month after his initial consultation with Dr. Boddu, Jarrod was in the procedure room. “The MRA and MRV scans we took prior to surgery showed not only the stenosis, but an aneurysm — a bulging of the vein,” says Dr. Boddu. “The aneurysm presented as an outpouching, which had been going on for so long and had grown so large that it affected the bone in the area. Think of it like erosion: how water, over time passes over a rock and carves it away. That’s what this outpouching was doing: it eroded that part of the skull, which is the most likely reason why Jarrod’s symptoms had become more pronounced.”

When Jarrod awoke from the surgery, everything felt normal. “I wasn’t in any sort of pain. I actually felt fine,” he recalls. “There was nothing unusual, just perhaps a little groggy coming off the general anesthesia. Over the next couple of days I had headaches, but Dr. Boddu told me it was to be expected. I had these fantasies of the stent coming loose and killing me! Dr. Boddu told me not to worry — stents don’t just come loose. A month later, I was headache-free.”

For the first time in almost 20 years, Jarrod can sleep on his left side, but more importantly he has peace of mind again.  “I’m free from the anxiety I felt and from the fear of not knowing why this was happening,” he says. “Knowing that the narrowing has been treated, it all feels really good. I’m so grateful that I found a great doctor for this, and I’m glad that I went through the procedure. If anyone out there’s going through something similar, don’t let fear or anxiety keep you from seeking treatment. There’s a renewed peace and clarity in my life. You’ll be glad that you followed through. Me, I have no regrets.”