Eneida Ramos, 39, has a full, active life. At any given moment she may be found volunteering, painting, working on her DIY projects, or cuddling her baby boy. Nothing about her cheery demeanor would suggest that until recently her life had been on “Pause” while she grappled with debilitating seizures, headaches, and vision disturbances. But thanks to Dr. Theodore Schwartz at Weill Cornell Medicine and NewYork-Presbyterian, Eneida has been able to press “Play” and live a full life again with her family.

Looking back, Eneida believes it all started more than a decade ago, but she didn’t realize it at the time. “I had headaches for at least ten years, but just blamed them on stress from work and life,” she says now. “I would take painkillers, which would alleviate the pain but not stop it. I was told by my primary care physicians that they were probably tension headaches or cluster migraines. We just left it at that.”

The first real sign of trouble came in 2016, but even then Eneida didn’t recognize how serious things were. “I was at the airport when I started to notice a change in my vision,” she recalls. “Reading, focusing on faces, and everything around me seemed ‘off.’ I figured it was time to visit the ophthalmologist to get my prescription changed.”

Before she even made it to the eye doctor, though, her vision went into a tailspin. “I was only seeing half of everything. Half of my hand, half of faces — everything was split in half. I didn’t say anything to anyone because I knew what was happening was not good. With my little sister’s wedding coming up and my own wedding two months after that… I decided to hold off on letting my family know the extent of how I was really feeling. I didn’t want some bad news to ruin these happy moments.”

Eneida finally confided in her fiancé, Rafael, when she developed a new, disturbing symptom. “I had been getting these odd feelings, feelings of déjà vu and distortion, that would come and go,” she recalls. “I didn’t really think anything of it, until one day on my way to work I had one that seemed to go on for an eternity. I had to stop from entering the train station and let it pass. After that I started getting them daily, up to seven times a day. I became tired and emotionally drained after each episode, affecting my work and social life.”

Rafael recommended she schedule a doctor’s appointment right away, but Eneida decided to hold off until after their wedding. “It was the happiest day of my entire life — people were shouting congratulations, taking photos,” she says. “If they only knew what was happening inside. I had multiple déjà vu episodes that day, and I could only see everyone’s faces split in half, including my husband’s.”

The ophthalmologist Eneida visited after the wedding told her she had lost peripheral vision in both of her eyes and needed to see a neurologist, who scheduled an MRI scan — then immediately referred her to Dr. Schwartz. The MRI scan revealed that Eneida had a tumor.

“We have the benefit of hindsight,” says Dr. Schwartz, “but the signs were all there. The constant headaches are one of the symptoms of a tumor. In Eneida’s case, it was a pituitary macroadenoma — a benign tumor located in the pituitary gland that, as it grows, can cause other neurological problems such as bitemporal hemianopsia — a condition in which you lose your peripheral vision — as well as partial seizures, which is what those ‘déjà vu’ episodes were.”

Eneida had done some research about Dr. Schwartz before her appointment and was satisfied that he had the right credentials and experience — but it was meeting him that persuaded her that he was the right neurosurgeon for her. “He has a great bedside manner,” she says. “He didn’t see me as just a surgical case, but as a human who needed surgery to live a healthy, happy life. He listened to my concerns and my plans for the future. He took everything into consideration.”

Dr. Schwartz has seen enough patients with pituitary tumors to know they have more than just physical effects. “Due to the seizures, a patient can undergo shifts in perception,” he says. “You start wondering if something truly happened to you. The seizures left Eneida without a sense of place.”

Eneida was reassured that Dr. Schwartz understood her, and relieved that the surgeries would resolve not just her physical symptoms but her emotional ones as well.  “My day-to-day life had been so shaky,” she recalls. “I was scared to go out alone since my vision was getting worse. I couldn’t do so many of the things I loved. The plans for having a family were put on hold.” She was more than ready to end that sense of having hit the “Pause” button on her life. 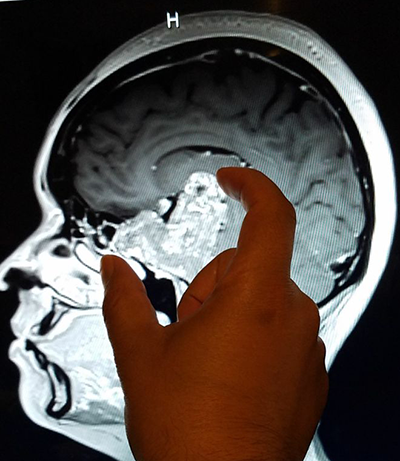 “Eneida was a lovely patient to work with,” recalls Dr. Schwartz. “but her case was complicated because her tumor was massive, wrapped around her optic nerves, the arteries that feed her brain and pushing on her temporal lobe. We needed to do something quickly to alleviate her symptoms, but it was clear that she would need two surgeries. Since her visual loss was the most pressing issue, we scheduled a transsphenoidal surgery right away to take as much of the tumor out through her nose as we could, and then a craniotomy for four months later to remove the remainder of the tumor.”

Dr. Schwartz specializes in endoscopic endonasal surgery, which is a minimally invasive procedure that allows him to reach a pituitary tumor through a patient’s nose. He used an endoscope and small surgical instruments inserted through Eneida’s nostrils and into her sphenoidal sinus cavity — with no incision at all. The first surgery was a success, and most of the tumor was removed and her optic nerves were fully decompressed. The results were amazing.

“I won’t sugarcoat it, it was more painful than I had anticipated,” says Eneida. “But regardless of the pain, when I opened my eyes I was able to see whole again. It was the best feeling in the world! I was able to see!”

Four months later it was time for the second surgery — a craniotomy, in which a portion of the skull is temporarily removed to allow access to the brain, then replaced. This second surgery was required to remove the parts of the tumor that could not be reached through her nose  Having fully recovered from the transsphenoidal surgery, Eneida was nervous about the next step.

“I was terrified of what was to come,” she says, “but to my surprise — and everyone else’s — I was up and walking around in just a few days. The stitches and the black eye were probably the worst of it.” Best of all, she knew the whole ordeal was over.

“Two years later, I have a life again!” she exclaims. “Zero obstacles. No seizures. No daily headaches, and I can see everything clearly. But the best part of getting my life back is not having to keep my plans for having a family on hold. I am now the mother of a handsome, happy, seven-month-old baby boy. I have Dr. Schwartz and his entire team to thank for this beautiful gift.”

For anyone in her shoes, Eneida has calming advice: “It’s okay to feel scared. It’s okay to feel anxious. It’s okay. You may have had to hit the ‘Pause’ button on all the things you’re unable to do at this time, but just know that after you recover… you can hit ‘Play’ again.”