"You Just Couldn't Hold Her Down"

This active little girl was ordered to stay still while recovering from risky spine surgery — but nobody could keep her from getting back on her feet.

Emily Louick was 11 years old in the winter of 1999 when she started feeling pain in her right leg. The athletic sixth-grader had sprained an ankle a few weeks earlier, and her parents, Karen and David, thought the leg pain was related to that. But the pain kept getting worse and eventually spread to her lower back. Emily’s pediatrician suggested that she see an orthopedist, which brought them to Dr. Daniel Green at the Hospital for Special Surgery.

After a round of inconclusive tests, Dr. Green ordered an MRI — which revealed an unusual tumor wrapped around the lower part of Emily’s spinal cord. He urged Karen to take Emily to a neurosurgeon immediately. “She’s going to need to have it removed,” he said.

The next day Emily met Dr. Mark Souweidane, pediatric neurosurgeon at Weill Cornell Medical College, who carefully explained the situation and noted how serious it was. “I’m concerned that she’s losing motor function,” he said. “We need to address this immediately, but we won’t know whether the tumor is benign or malignant until we remove it.”

Removing it would not be easy. Dr. Souweidane would need to use microscopic surgical techniques to carefully excise the tumor from Emily’s spinal cord. If the cord or nerves were damaged in the process, Emily might never walk again. “Spinal cord surgery was risky, we were told, and there was a chance she would be paralyzed for the rest of her life,” says Karen. “Everything about the situation was terrifying, but paralysis was my biggest fear.”

Surgery was scheduled for the next day. While Karen, David, and their older daughter, Rebecca, anxiously waited for the operation to begin, Emily was calm. “It all happened too quickly for me to be afraid,” Emily recalls. “My family was very strong in front of me, and I think that allowed me to feel calm through the whole thing. I never doubted my doctors’ abilities to keep me healthy and just saw it as: ‘OK, if this is what has to be done, this is what has to be done. I didn’t realize how serious it was at the time.”

During the operation, Dr. Souweidane and his surgical team worked slowly and meticulously to cut the tumor free from the neural tissue, bit by bit. Eight hours later the team had succeeded in removing the entire tumor, and Emily was sent to the pediatric ICU to recover. Now it was just a matter of time, Karen and David were told, before they would know what kind of tumor it was, and what the outcome of the surgery would be. The parents and the surgical team were overjoyed based on early bedside testing of her strength and sensation in her legs — it looked likely that she would walk again!

Still, the waiting was hard. In pain and largely immobile, Emily remained in the  pediatric ICU for five days before being transferred to a regular room. Karen and David worried about how still she was, but the doctors assured them that Emily was making progress. Less than a week after the surgery, Emily was able to go home — under strict orders to stay still and let her body heal. “The doctors told us that she was not allowed to move much or go up the stairs at home until a physical therapist came to evaluate her,” recalls Karen.

But just three days after settling in at home, while Karen was at work, Emily got out of bed and climbed the stairs of her Brooklyn brownstone to ask her babysitter for pasta. “That was the moment when I knew she was going to be okay,” says Karen. “Emily couldn’t be held down.”

There was more good news to come. Several weeks after the operation, the pathology report showed that the tumor was benign. “There were a lot of tears of relief,” Karen recalls. 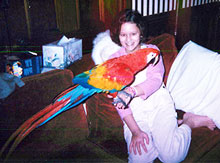 The pathology report also showed that Emily’s tumor had been a spinal epidermoid cyst — an extremely rare, slow-growing, benign neoplasm that can occur when normal cells are trapped within the growing spine. This is potential risk from a spinal tap (Emily had received one as a baby), in which skin cells may be accidentally introduced into the spinal column.

As Emily continued to improve and her pain subsided, she grew restless and bored at home. She was missing her friends, school, and — most of all — sports. Teachers and classmates dropped off schoolwork so she wouldn’t fall behind, and visitors came by to cheer her up, including a local shop owner who brought her toys and his pet parrot to keep her entertained. She also got an invitation from celebrity pastry chef Jacques Torres, to visit his restaurant, which Emily and Karen eventually did. “I reached out to him because Emily was such a fan,” says Karen. “He sent her an autographed picture with this lovely invitation to make Easter bunnies together.”

Two months after her surgery Emily was back at school part-time; a month later she was back full-time. Four months after the operation, Emily was swinging from the monkey bars on the school playground. “I kept up, didn’t lose the year, and was able to return to being editor of the school newspaper,” she says. Her first article was about meeting Jacques Torres. “I was pretty determined to resume normal life as quickly as possible,” she says. 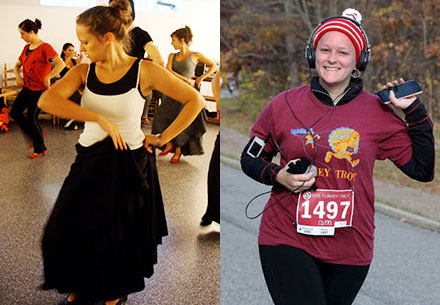 Today Emily shows no sign that she was ever at risk for paralysis: She dances, runs, and still lets nothing hold her down.

Today Emily is 28 years old and works in digital media. She loves to dance, travel, and run in her spare time. In the past two years, she’s run eight races and is now training for her first half marathon.

“My surgery seventeen years ago feels like a chunk of time in my past when I was unwell, but now I am healthy and living happily,” she says. She believes that without Dr. Souweidane, she might be paralyzed and unable to walk. “We will always be grateful to Dr. Souweidane for his expert knowledge and skill. It’s kind of hard to imagine what life would have been like without him,” she says.

Karen couldn’t agree more, and adds kudos to Dr. Green, who found the tumor on the MRI scan. “We had two doctors who really cared about what happened to Emily,” she says. “They were great.”

About Dr. Souweidane | About the Pediatric Brain and Spine Tumor Program