“You Wouldn’t Know Anything Had Ever Happened” – A Chiari Story

Slaton Spinks was small when he was born, but he seemed healthy. As the Texas baby grew, however, his parents, Brandee and Kevin, started to note some peculiarities. “He was delayed, and he just did things differently,” Brandee recalls. “He’d do the splits when he learned to sit. Or when he crawled, he crawled like a frog. He wasn’t putting weight on his feet, and his muscle tone was low.” 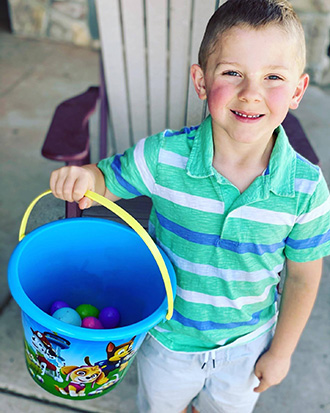 To see Slaton now, you would never guess what he had been through. Today he is thriving, thanks to Dr. Greenfield.

By the time Slaton turned a year old, there were some clear health concerns. “He couldn’t eat, and when he’d try to eat solids, he’d tongue them out or choke on them,” remembers Brandee. “A swallow study showed he was aspirating his milk.” Brandee and Kevin made the rounds of different doctors near home in Amarillo, Texas, and Slaton was finally diagnosed with Chiari malformation and sleep apnea. Little did the Spinks family realize at the time what complicated issues Slaton had and what a long journey they were beginning – a journey that took them to New York City and to Dr. Jeffrey Greenfield and his Chiari CARE team at NewYork-Presbyterian and Weill Cornell Medicine.

Having seen doctors locally in Amarillo and the surrounding area, as well as in Austin and Dallas, Brandee was searching online for the best doctors for Chiari malformation when she noticed one name that kept coming up.

“Dr. Jeffrey Greenfield was known by doctors here who had been to conferences he’d spoken at,” she says. “They had referred other patients to him. I even contacted one of the ladies in our area via a Facebook group. She also had children with Chiari malformation, and two of her daughters had seen Dr. Greenfield. I decided to reach out and ask if he would do a consultation.” He agreed, and the Spinks family booked their flight to New York.

Dr. Greenfield, an internationally known expert in Chiari malformation, remembers the family well. “When I first met Slaton, it was six months since he first presented symptoms,” he recalls. “At the time, he had aspiration pneumonia and sleep apnea, and he wasn’t talking. I knew that Slaton’s quality of life was at risk, and that decompression surgery was the only option at that point.”

Dr. Greenfield directs the Chiari CARE program at Weill Cornell Medicine Brain and Spine Center, where he treats the multiple types of Chiari as well as the related conditions that often affect those with the malformation. 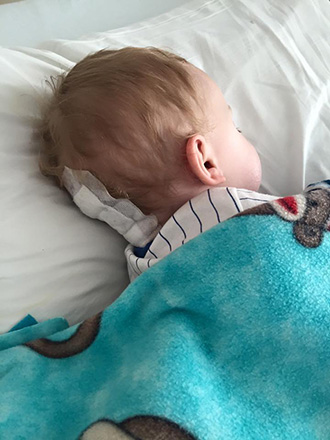 Slaton after his surgery

“Type I Chiari malformation is the most common type,” Dr. Greenfield explains. “The brain tissue at the base of the skull crowds into the opening at the back where the brain and spinal cord connect. Normally, that area is filled with fluid that moves and cushions the brainstem and the nerves that exit from that area. In Chiari, the fluid is restricted, which puts pressure on the brain, spinal cord, and nerves. Left untreated in very young children it causes pain, headaches, swallowing and sleeping issues, and even developmental delays. These were obvious in Slaton when we met.”

As soon as Dr. Greenfield walked into the exam room, Slaton seemed comfortable with him. “They were connected from Day One,” Brandee recalls. “Dr. Greenfield is so personable, plus he came in to our first appointment with the Child Life specialist. Slaton didn’t feel terrified; he felt comfortable. Even to this day, he’s still open and receptive to his care team.”

In the operating room, Dr. Greenfield and his team performed decompression surgery to reduce the pressure on Slaton’s spinal cord. “Surgery in very young children is simply to remove a small piece of the skull and upper spine – a so-called bone-only decompression and a C1 laminectomy,” says Dr. Greenfield. “It’s a low-risk surgery with high improvement. Our goal with this surgery was to improve Slaton’s quality of life — to allow him to grow and improve. Looking back at it now, he certainly has.”

The surgery was a resounding success. “Less than 10 months after the surgery, Slaton graduated from his speech and swallow therapy,” Brandee says. “The decompression surgery allowed him to catch up with his verbal skills. He jumped three growth curves and got back to the 60-70 percentile in length.” 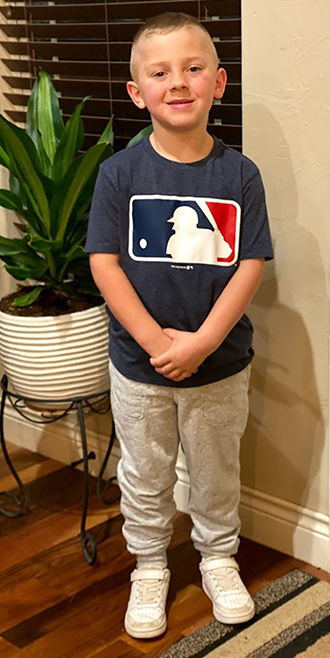 Slaton Spinks, 5 years after his surgery

Slaton still deals with other diagnoses: a connective tissue disorder called Ehlers-Danlos Syndrome as well as the sleep apnea and several other conditions. He’s a complicated kid, and he has had multiple other surgeries, but Brandee is proud to say that, just as after his surgery for Chiari, he always bounces back.

In March of 2021, Slaton and his family celebrated the five-year “zipperversary” of his surgery with Dr. Greenfield. “He has no difficulty eating or talking,” says Brandee. “He moves better and has been discharged from physical therapy. Occupational therapy worked with him on his motor control and strength. Looking back, our faith was the light in the storm; there was a bigger picture and a plan.” This month, Slaton starts first grade.

For someone whose family member is diagnosed with Chiari and its related conditions, Brandee says to hold on to hope. “Sometimes it’s really hard to look in the future and see where you’re going to be a week from now — it’s so exhausting and devastating. I believed wholeheartedly that we did get the best care for him. And if you see Slaton today, you’d never know he went through everything he went through. He couldn’t eat, sleep, or talk at the age of one and do those things safely. Now he’s a six-year-old boy. You wouldn’t know anything had ever happened to him — he’s doing everything a boy his age would do.”

More about the Chiari CARE program at Weill Cornell Medicine