You may have seen Chris Conroy on TV. The up-and-coming actor has, among other roles, appeared on USA Network’s acclaimed “Mr. Robot” and was the super-powered star of the Mercedes-Benz “Say the Word” commercial that ran during Super Bowl LIII. If you saw him in that commercial, you never would have guessed he’d just had brain surgery — or what a close call it had been. But thanks to Dr. Michael Ayad at NewYork-Presbyterian Brooklyn Methodist, Chris was back in front of the camera in no time.

Chris is a cool metropolitan guy now, but he grew up six hours away from New York in Brackenridge, Pennsylvania. “As I was growing up, I always wanted to make movies,” he says. “As a kid growing up in a small town I escaped in these movies with these characters.” Since moving to New York nearly a decade ago, Chris has honed his craft with his acting coach, with great results. His career was blossoming, but something nagged at him.

“My health didn’t always feel like it was in top shape,” Chris says. “Over the years I felt nondescript symptoms. My brain felt clogged and I felt fatigued. I’d get kind of nauseous or something like that, but nothing was that bad. I just thought that I was stressed out and had a stressful career — that this was par for the course.”

The symptoms suddenly intensified as Chris was walking to the gym with friends one day. A headache hit him, hard, and he no longer felt up to working out. It surprised everyone, including himself.

“I’m a pretty tough guy,” Chris says. “I’m a former athlete from blue-collar family — we’re taught to be tough. I thought I was probably a little dehydrated, but I decided to go to urgent care.” The doctor there urged him to go to the hospital, but instead he went home, where he started feeling worse. His headache, as he describes it, reached an intensity of a “20 out of 10” and he was vomiting every five minutes. At midnight, with the help of his best friend, he walked from his apartment to Brooklyn Methodist, just a stone’s throw away. And not a moment too soon.

“If we didn’t operate quickly, Chris could have developed severe brain damage,” says Dr. Ayad, the attending neurosurgeon who saw Chris in the ER. A  CT scan showed a mass in Chris’ head. An MRI then confirmed that it was not a brain tumor but an abscess – a pocket of pus that can develop as a complication from a dental or sinus infection, surgery, or trauma.

“In Chris’ case the abscess was very close to the lateral ventricle, which contains spinal fluid,” says Dr. Ayad. "If the abscess were left untreated, it would have eventually ruptured into the ventricle, which carries up to 40 percent risk of mortality.  The pain Chris was experiencing was due to the intense inflammation of the brain surrounding his abscess. It was quite surprising that he did not have any neurological deficits based on the size and location of the lesion.”

It was a physician assistant who first gave Chris the news. “I remember waiting in the exam room… and as soon as the neurosurgery PA sat down, I knew it was something bad!” Chris remembers. “He came in and told me we would have to do surgery today. I had ten minutes of shock, but my head was still in a lot of pain; I just wanted this headache to go away.”

When Chris met Dr. Ayad, he immediately felt at ease. “To this day, I keep personal contact with him, because I like the guy a lot! From the outset he was very professional, but also very compassionate at the same time — he told me what I needed to know.”  Dr. Ayad shares the same sentiments: “For a guy with a severe headache and severe brain swelling from a brain abscess, he was surprisingly able to joke around!” 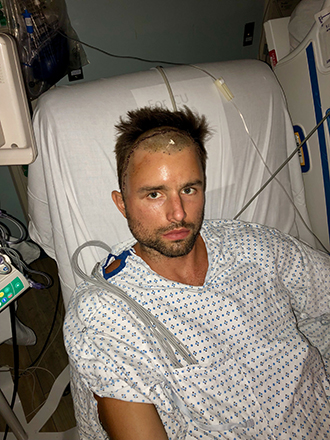 Anyone facing brain surgery worries about the risks, of course, including the cosmetic ones. For someone building a career in front of a camera, though, scarring is a professional as well as personal concern.

“I told him about the craniotomy,” says Dr. Ayad, referring to the surgery in which a portion of the skull is removed to allow access to the brain. “I said we would have to completely remove the abscess to alleviate the risk of it recurring, and I told him about the potential aesthetic risks. We used a targeting system to carefully localize the abscess, and allow us to make the smallest craniotomy possible.  A number of steps were taken to give Chris the best cosmetic result possible.”

Cosmetic results were not the only worry, however. “The abscess was just in front of the motor area of the brain controlling the left side of his body," says Dr. Ayad. "Careful dissection ensured that no injury to this important area occurred and thankfully he awoke from surgery without any deficits at all.”

Chris awoke to his friends in the room – his family was still on their way. “Before the surgery, I had to call my little brother and let him know what was going on,” says Chris. “They were still on a Megabus coming from Pittsburgh! But my friends, my family, everyone being there and their outpouring of support… it helped me with my recovery.”

The recovery process took two months. “I had to take oral antibiotics along with an IV drip four times a day,” Chris says. “I’m thankful that they did a good enough job where I had no motor or visual problems. Everything healed up pretty quickly.”

Chris also attributes his quick recovery to his mindset. “It was pretty incredible how part of the recovery was my own mental state. I wanted it to be as quick as possible.”

His acting career took no breaks either: he booked the Mercedes-Benz commercial less than three months after the surgery. “I didn’t even tell any of the producers that I had brain surgery. I wanted them to treat me normally, and that’s what happened. That, to me, was a huge victory. The only thing they noticed was my hair. My headshot shows a wilder hairstyle — I just told them I got a short haircut.”

Chris felt most fortunate to have Dr. Ayad on his side, and lucky that he lives near NewYork-Presbyterian Brooklyn Methodist, with its world-class experts. “Dr. Ayad encompasses the greatest in humanity and professionalism,” he says. For someone going through a similar situation, he would tell them to make sure they’re in good hands.  “Ask all the questions you need, make sure you have loving people around you and leave it up to whomever needs to do their job.”

More about Dr. Ayad | More about our services at NYP Brooklyn Methodist