"I Knew There Was an End in Sight"

Joya Cleveland lives in Kansas City, Missouri, but she’s not actually there much. Between traveling for work and going on adventures of her own, she’s more often on the road than at home. “I work for Live Nation Global Touring as a touring production accountant.  Which means I’m usually in a different city every few days, depending on the tour I’m working on,” she says. “For my most recent assignment, I was stationed in New York for three months — the length was an uncommon arrangement for me.” This unusual assignment turned out to be fortuitous, as it gave her enough time to be diagnosed with trigeminal neuralgia, consult with a neurologist and neurosurgeon about treatment options, and undergo the pain-relieving surgery to correct it.

“I remember it like it was yesterday,” Joya says. “I was home for a week between projects, planning to leave for New York in a few days, and I had been sitting at my desk working all day. In the evening I got this tremendous amount of pain in the back of my jaw and it felt like the worst toothache ever.  It spread slowly from tooth to tooth like a slow-moving tsunami wave — all the way across the top part of my teeth from the back to the front and to the bottom part of my jaw. It was no doubt the worst pain I’ve ever felt.”

The wave of pain persisted for about an hour and then stopped, but she felt it again the next day, and it was even worse, with multiple waves of pain crashing over her. “I experienced four hours of pain,” she says, recalling how she Googled her symptoms to try to find out what was going on. Everything she read pointed to trigeminal neuralgia (TN).

“I knew I had to get to the emergency room,” she recalls, but she hesitated because it was the Fourth of July and she knew there would be a long wait. By 10 pm the pain was unbearable and she took a Uber to the ER, where a doctor diagnosed her with trigeminal neuralgia and gave her nerve medicine to suppress the pain.

It didn’t work. “That Saturday, I went back to the ER with a tremendous amount of pain,” Joya says. “They prescribed a different nerve medicine, which didn’t work much better. And the next day I had to get on a plane to New York.” Fortunately for Joya, the flight was a mere three hours; she tried to sleep the pain off at the SoHo hotel room that was to be her home for the next three months.

Sleep didn’t help, and on her first morning in New York, Joya was in distress. “I called my bosses first thing in the morning, in tears and pain,” Joya says. “I told them I didn’t think I could do this job. Thankfully, they were very understanding – and one of them knew a neurologist at NewYork-Presbyterian. I scheduled an appointment right away, and was referred to Dr. Knopman.” 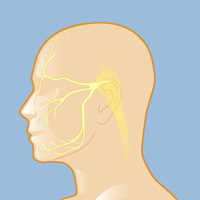 Trigeminal neuralgia is a condition of the fifth cranial nerve, also known as the trigeminal nerve, which transmits signals between the brain and the face, eyes, and teeth as well as the muscles that control chewing.

“Trigeminal neuralgia is a debilitating disease that’s centered around the fifth cranial nerve, the trigeminal nerve” says Dr. Jared Knopman at NewYork-Presbyterian Weill Cornell Medicine. “It’s the nerve that transmits signals between the brain and the eyes, face, and teeth, as well as the muscles that control chewing. If it gets compressed by a blood vessel, it causes great pain. Joya’s symptoms were primarily pain in her teeth, but others experience pain in their eyes and face. There are also two types of trigeminal neuralgia — Type 1 has pain coming in sudden, sharp bursts. Type 2 is more like Joya’s: a continuous pain described as aching or burning with sharp bursts of pain occurring intermittently.”

Dr. Knopman reassured her that trigeminal neuralgia is not life-threatening, but he acknowledged that the pain — a feeling of burning, stabbing, electric shock — was so intense that some patients have reported that it may as well be.

“When TN first develops, the pain often comes and goes,” says Dr. Knopman. “As the condition progresses, the pain becomes more constant and the relief between episodes becomes shorter — from hours to only a few minutes. Sleep can provide a respite, but that’s assuming the patient can find sleep in the first place.”

By the time Joya met with Dr. Knopman, it had been more than a week since she’d started feeling symptoms. “I was up all night in tremendous amounts of pain. I couldn’t brush my teeth, and I couldn’t eat,” Joya recalls. “I was barely drinking water from a straw. I was taking nerve medicine, drinking wine, homeopathics, taking Advil — everything I could do to knock the pain down a little bit.”

In their meeting, Dr. Knopman discussed options for short-term and permanent pain relief, but explained that in severe cases like Joya’s, pain medication would provide only temporary or suboptimal relief, at best. He also cautioned her that leaving the nerve under pressure could lead to permanent damage. “Treating this with medication isn’t always a possibility in the long run,” says Dr. Knopman. “We will try medication first but if you don’t get any relief, I recommended that we operate — and soon.”

Joya didn’t need to be persuaded. “With all the pain I was in, I had to do it. I was in New York, with the best of the best surgeons in America,” she says. “So I didn’t have a single bit of hesitation when I was sitting in the office with him. Dr. Knopman was great — he explained everything to me, from the procedure to the timeline. I felt well educated on what the surgery was going to be like, and I said, ‘Let’s do it as quickly as possible.’” (More about our Facial Pain Program)

The day of the surgery, Joya got to NewYork-Presbyterian/Weill Cornell Medical Center early to do the pre-op for the 7 am surgery. Suddenly the anxiety of having surgery set in. “It was one of the first times I let this freak me out,” she recalls. “The idea of my skull getting cut into isn’t a light thing to consider. I had tears rolling down my face most of that morning. But what kept me going was that I knew there was an end in sight.”

When they began surgery, Dr. Knopman was surprised. “When I inspected her nerve at surgery, I was troubled to see the MRI hadn’t fully shown the severity of her condition,” he says. “As it turned out, there were multiple blood vessels tangled up with her cranial nerve. We gently separated every blood vessel away from the nerve and put small pieces of Teflon between them so that they would never compress the nerve again."

When Joya woke up, she felt an immediate difference. “I could immediately tell that most of the pain was gone,” she says. “I still had some pain in the back of my jaw, but Dr. Knopman said that it would be normal again after a little while.” 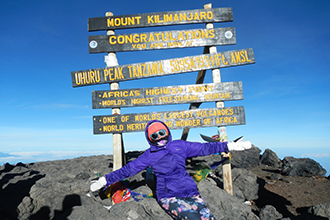 Joya at the top of Mt. Kilimanjaro

Joya got back to work and finished her assignment in New York, grateful that she had this episode in a city with a major academic medical center, with experts in trigeminal neuralgia.

“It was hard for me to put my life on hold for months during my illness and recovery,” she says. “I snowboard, I go sailing — in February this year I climbed Mt. Kilimanjaro, but by July and August I could barely walk to work! At the worst of the pain it felt like my bones were being crushed and electrical currents were going through my skin, but I’m back to a hundred percent now. Later this month I start my next tour working in  Australia, New Zealand, Japan, Singapore, among other places around the globe.”

Joya is grateful to the experts at NewYork-Presbyterian and Weill Cornell Medicine, and to the network that helped her find treatment there. “I was lucky to have my friends and a supportive work circle,” she adds. “Mentally, not being able to sleep or eat for two weeks, your mind starts to play tricks on you. It’s the worst thing I’ve ever experienced.”

For someone who’s undergoing something similar, Joya says, “Don’t wait — as scary and as expensive as having brain surgery is, your health and your life are way more important. Get in there and get it done quickly so that you can continue with your life again.”