The surgical solution to Moyamoya disease is called extracranial-intracranial bypass surgery, or cerebral revascularization, which restores blood flow to the brain by diverting blood from a vessel in the scalp or nearby muscles to the oxygen-starved brain. The brain is then able to produce new blood vessels – a process called angiogenesis — from the graft to take advantage of the new source of blood supply. 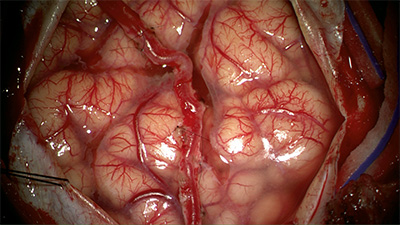 Cerebral revascularization is an advanced neurosurgical procedure that should be performed by highly trained specialists at major medical centers.  The surgery involves isolation of the donor vessel in the scalp and suturing of the graft onto the brain surface. Like any brain surgery, revascularization carries with it some risk of bleeding or stroke, but when the surgery is performed by an experienced neurosurgeon those complications are rare. The surgery usually has good outcomes, especially in children and young adults. Most patients who undergo revascularization surgery do not have further symptoms or strokes and no further treatment is needed, although they may need rehabilitation to help them overcome the effects of previous strokes.

The best time for surgery for Moyamoya disease is before the patient suffers a stroke or hemorrhage, which may cause long-term damage. Any patient with a suspected or confirmed diagnosis of Moyamoya should be