About Brain and Spine Injuries

Bumps and falls are usually not serious (ask any parent or athlete), but traumatic injuries happen more often than you might think. The CDC estimates that 1.7 million people every year suffer a traumatic brain injury (TBI) and 20,000 sustain a spinal cord injury. These injuries can be the result of car accidents, falls, sports, or violence, and they add up to a significant public health concern.

Fortunately, the majority of traumatic brain injuries that occur are concussions or other mild forms of TBI. Mild TBIs are generally not life-threatening and don’t require surgery, but they do have consequences and need medical attention. Some TBIs will necessitate follow-up therapy to restore full functioning. Find out more about concussions.

Mild TBIs are often difficult to distinguish from more serious injuries, especially at first, which is why they all need to be evaluated. Two good examples are the deaths of Natasha Richardson and Bob Saget. Richardson's 2009 fall on a ski resort’s “bunny hill” seemed insignificant at first, but the actress had in fact suffered a severe TBI. What seemed like a minor head bump caused a hematoma that led to her death. Similarly, Saget's 2022 death in a Florida hotel room was determined to have been caused by a fall that caused an injury to the back of his head. The resulting brain bleed was fatal.

A severe TBI can be either closed (as in a serious fall or blow to the head, like Richardson’s or Saget's) or penetrating (such as a gunshot or a sharp object entering the skull). They are often fatal, and they are always medical emergencies that require prompt attention. The  case of former Arizona congresswoman Gabrielle Giffords is a case in point. Giffords was lucky to have survived a 2011 shooting because she received immediate attention and emergency surgery, but her brain injury was significant and she requires ongoing therapy to regain full function. (The story of how music therapy helped her regain her speech was recently featured on an episode of This Is Your Brain With Dr. Phil Stieg; listen to the episode here.) 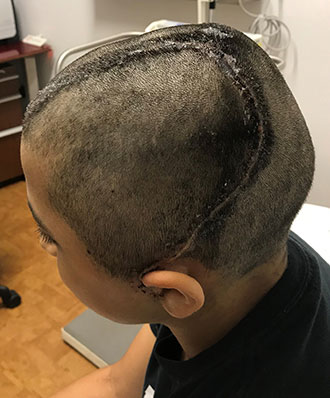 Kids and teens find all kinds of ways to sustain head injuries, and our pediatric neurosurgery team has seen many of them. Don't miss the story of this incredible save of a teen who didn't realize the risk he was taking when he climbed onto the back of a delivery truck.

Other spine injuries may involve damage to the bones (vertebrae) of the back, but not the spinal cord within.  Some of high-profile injury cases in New York have included a window washer who survived a 47-story fall, a Brooklyn flight attendant who was airlifted home after breaking her spine in a three-story plunge from a hotel balcony in the Dominican Republic, and a New York City firefighter who leaped from a burning building on what came to be called Black Sunday.

The neurosurgeons of the Weill Cornell Medicine Brain and Spine Center treat patients who arrive in the emergency room of NewYork-Presbyterian/Weill Cornell Medical Center, which is a Level 1 trauma center capable of providing expert medical treatment in emergencies.  Our neurosurgeons are on call 24 hours a day, 7 days a week, to participate in the emergency care of injuries to the brain and spine.

The expertise of Weill Cornell Medicine reaches beyond the main campus in Manhattan, with world-class treatment now available at NewYork-Presbyterian Queens and Brooklyn Methodist as well as in Lower Manhattan. (Read about a young woman whose motor vehicle accident landed her in emergency treatment in Queens.)

Our neurosurgeons also treat non-emergency cases, including those less severe injuries that nevertheless cause pain and affect quality of life – and some of New York’s top athletic teams, including the New York Giants, New York Jets, and New York Islanders, put their trust in the experts of the Brain and Spine Center to ensure their players are in top condition.