Magnetic resonance imaging (MRI) produces detailed visualization of brain tissue and accurately detects acute and chronic strokes. MRI can also be used to rule out tumors or other causes of neurological symptoms.  MR perfusion study can be used to evaluate the difference of blood flow between the hemispheres of the brain. 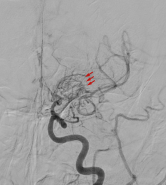 Computed tomography angiograms (CTA) and magnetic resonance angiograms (MRA) are non-invasive vascular studies that create three-dimensional images of the blood vessels in the brain. They are routinely utilized to diagnose intracranial vascular diseases such as aneurysms, AVM’s, and Moyamoya disease.

Digital-subtracted cerebral angiogram (DSA) produces the most detailed images of the blood vessels of the brain and the characteristic “puff of smoke” appearance. It is the definitive test used to diagnose Moyamoya disease.

Some patients may have a single photon emission computerized tomography (SPECT) scan, which can show the areas of the brain that are being deprived of oxygen.

Once Moyamoya disease is diagnosed, an experienced neurosurgeon will evaluate the individual patient and make a treatment recommendation. Surgery is the only treatment that has been shown to prevent future strokes and neurological deterioration (see Surgery for Moyamoya Disease), but a doctor may recommend some immediate nonsurgical options, such as blood-thinning drugs or blood pressure medications to reduce the risk of stroke. Patients who have suffered neurological deficits from Moyamoya may need speech or physical therapy to restore functioning.