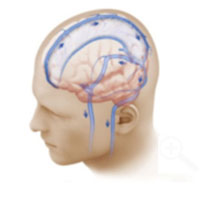 In a healthy brain, there is unobstructed blood flow from the brain towards the neck (blue arrows).

From 2012 to 2020, Weill Cornell Medicine conducted an FDA-approved research study for idiopathic intracranial hypertension (IIH), also known as pseudotumor cerebri, a disorder that primarily affects young women and can lead to loss of vision. This innovative trial tested the effectiveness of stent placement in patients with severe intracranial hypertension who had not responded to other treatments.

IIH is caused by high pressure in the fluid around the brain, and its alternate name of pseudotumor cerebri comes from its symptoms (including headache, blurred or double vision, ringing in the ears), which are similar to those of a brain tumor. But IIH is not a brain tumor — the presence of a tumor or other condition must be ruled out in order to make the diagnosis. IIH is diagnosed when there is no other known cause for the increased pressure. 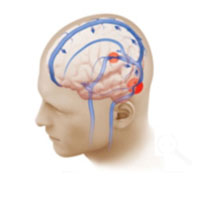 This illustration shows bilateral venous sinus narrowing (red circles). As a result of the bilateral narrowing, the blood flow from the brain to the neck is compromised, contributing to intracranial hypertension and the symptoms of pseudotumor cerebri.

Current treatments for IIH include medication to lower intracranial pressure and surgical placement of a shunt to drain excess cerebrospinal fluid (CSF). Unfortunately, many patients do not respond to either of these treatments, or they experience side effects that impair their quality of life. These patients need an alternative: Unresolved pseudotumor cerebri can lead to severe vision loss, making it imperative that the condition be treated and the intracranial pressure lowered.

Since some cases of IIH are associated with severe stenosis of the large veins of the brain (called "venous sinuses"), this clinical trial evaluated the safety and long-term effectiveness of venous sinus stenting in patients with severe IIH that had not responded to other treatments. Earlier reports had suggested that venous sinus stenting could be a safe and effective treatment option for IIH patients with stenosis. 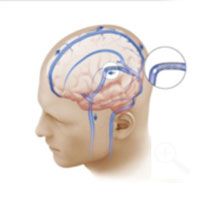 The venous sinus narrowing has been treated with placement of a stent. As a result the blood flow from the brain to the neck is now restored (blue arrows), relieving the increased intracranial pressure and the symptoms of pseudotumor cerebri

The purpose of our study was to evaluate the safety and efficacy of this stenting in a controlled fashion, using strict inclusion and exclusion criteria, with long-term clinical and imaging follow-up. We hoped to show that in a select set of these patients with significant venous sinus stenosis, increased intracranial pressure and associated symptoms would improve after treatment. The results were positive, and we now routinely treat patients with the stenting procedure. (Request an appointment.)