Comeback of the Year

Mikal Scott never got headaches. Ever. They wouldn’t dare to intrude on his organized, high-powered life as a creative problem solver and competitive runner. His clients included several international companies, so he traveled for work as well as for his races. Nothing slowed him down.

Until suddenly, while training for a 5K charity run supporting NYPD officers, Mikal experienced a very unfamiliar feeling: a headache.

That headache started as an annoyance but turned out to be the harbinger of things to come. The headaches came sporadically with no tangible triggers, but they would be so debilitating that Mikal would be unable to focus for periods at a time. Business meetings became difficult as he would sometimes have to step out of the room due to the pain. Outside of work, conversations with friends would come to a halt at the onset of a headache—an unfortunate circumstance for someone as social as Mikal. The headaches affected his running as well. The morning of the 5K charity run, he experienced pain so severe he vomited. Nevertheless, Mikal willed himself to complete the 5K.

Refusing to let his headaches take over his life, Mikal sought help from his primary care doctor, who recommended he visit a radiologist for some scans. The images showed a subdural hematoma—a pool of blood formed under the outer covering of the brain. His doctor directed him to the emergency room at a local hospital, where he had further testing. He was observed by a series of doctors over four days and was released with a mandate to see his primary care physician again the following Tuesday.

Mikal didn’t make it to that appointment because his condition quickly deteriorated after his release. This time Mikal went to the emergency room at NewYork-Presbyterian Weill Cornell Medical Center. 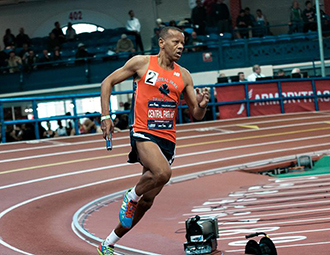 Mikal Scott on one of his many runs

Once he was stabilized, Mikal met Dr. Jared Knopman, a neurosurgeon who was pioneering a new way to treat subdural hematomas. Mikal remembers that he got right to the point: Dr. Knopman told him, “Don’t worry, Mr. Scott, you are not going to die!” Mikal was shocked, since until that moment no one had even suggested that death was a possibility. “I loved Dr. Knopman’s confidence,” Mikal remembers, “It’s one of the reasons I moved and stayed in NYC—so many positive, hard-working smart people!”

Dr. Knopman and Mikal hit it off quickly. He wasted no time in outlining the options for Mikal: he could either undergo traditional surgery where a hole is drilled in the skull to drain the blood or he could attempt a new, minimally invasive procedure where the source for the bleeding is embolized (shut down), allowing for the body to naturally resorb the blood over time on its own.

The new procedure was called middle meningeal arterial (MMA) embolization. In MMA embolization, a neurosurgeon with expertise in image-guided cerebrovascular treatments threads a microcatheter from a tiny needle stick in the upper thigh and into the arteries feeding the subdural hematoma, then cuts off its blood supply. Dr. Knopman had been the first person in the world to do this procedure on subdural hematomas instead of traditional surgery.  Although his results were thus far promising, the procedure was still new. (Listen to Mikal and Dr. Knopman talk about the surgery on the This Is Your Brain podcast, below.)

It was an easy choice for Mikal: he went with the new technology, welcoming the opportunity to be among the first patients in the world to have it done and happy to contribute to any progress in Dr. Knopman’s work.

Dr. Knopman went over the procedure with Mikal carefully, explaining that he had the option of being awake or unconscious for the surgery. Mikal, excited for this unique experience, opted to stay awake. “I enjoyed listening to the preparation and the actual procedures,” he recalls. Dr. Knopman’s play-by-play during the procedure made Mikal feel more involved in the process, although he admits that it was a surreal experience to sense the microcatheter moving around in his head. He remembers this well, saying, “I felt like there were little ants crawling inside my head. It was a tickling feeling!” 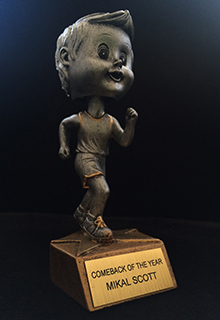 To Mikal’s relief, the headaches disappeared after surgery. His business and his running career could flourish again without the interruptions caused by the pain.  The minimally invasive approach also gave Mikal a faster recovery, which meant he would be able to return to running sooner rather than later.

Not right away, however, as Dr. Knopman forbade him from running while he rested and recovered. Once cleared to run, Mikal slowly began training just 60 days after his surgery with the aim to race in a 5K cross-country event. The sense of normalcy started to return to Mikal’s life as he competed just 30 days later, and then at two other events throughout the fall.

Mikal was away on a trip when he received a text from his teammates saying he had won the “Comeback of the Year” award at the Team Awards Dinner. (He hadn’t even known he was nominated.) Clearly, the old Mikal was back.

The following spring Mikal took a short trip to Philadelphia to compete in the Penn Relays in a 4x400 relay race. He then competed in the prestigious Milrose Games back in New York, where he ran the 4x400 relay again. He was slowly returning to form: his team earned a spot on the podium by finishing in 3rd place.

Now fully recovered, Mikal is happy to share his experience. For anyone diagnosed with a subdural hematoma, he says, “I heartily give big accolades to Dr. Knopman and his top-caliber team. Anyone in his care is in good hands and minds.”