Going for It: A Patient Story

Pearl Staller, known to everyone as “Freddie,” was an active woman of 90 — an avid skier who spent most of her winters on the slopes near her second home in Snowbird — when she started having pain in her left leg and her lower back. Diagnosis: spinal stenosis, a narrowing of the spinal column that puts pressure on the nerves and causes pain. Spinal stenosis is not unusual in people over 50, as there are a number of conditions that can cause it, including herniated discs, arthritis, and other spine conditions that occur with age.

Not one to let pain slow her down, and certainly not willing to accept pain as a necessary part of aging, Freddie sought help first from an acupuncturist and then from a physiatrist, who tried epidural steroid injections, but neither specialist was able to eliminate her pain.

“At first I’d said I would try almost anything to get relief,” says Freddie. “Except surgery, that is. I didn’t want surgery. But I had gotten to the point where I couldn’t function, so finally I had to see a neurosurgeon.”

Luckily for Freddie, the neurosurgeon she visited was Dr. Roger Härtl, an expert in minimally invasive surgery for spine conditions. Freddie had no way of knowing that Dr. Härtl was internationally recognized not just for his surgical skills but also for his research, and that he was about to publish a major paper on using minimally invasive techniques for four of the most common spine conditions — including spinal stenosis.

That paper, “Ten-Step MIS Lumbar Decompression and Dural Repair through Tubular Retractors,” covers more than a decade of Dr. Härtl’s clinical research on minimally invasive surgery (MIS) for spine conditions. It details the steps of four common MIS spine procedures and summarizes outcomes in 331 patients. The paper was published electronically in advance of print in the journal Neurosurgery in August 2016.

Freddie says she didn’t know anything about Dr. Härtl’s research acumen, and she didn’t need a lot of convincing at that point anyway. She had just one visit with Dr. Härtl, who confirmed her diagnosis and said she was a good candidate for surgery. That’s all Freddie needed – they scheduled the surgery right away. 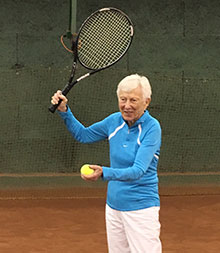 “When I evaluate candidates for surgery, I take the whole patient into consideration,” says Dr. Härtl. “And in Mrs. Staller I saw a healthy, active woman with a condition I knew I could repair using minimally invasive surgery with tubular retractors. Nobody should suffer from pain, or accept a disability, when there is a relatively simple procedure with quick recovery times that can alleviate that pain and get her back on her feet. This MIS surgery allowed us to do a decompression of the nerves without having to do a fusion with screws and rods.”

Once she decided on surgery, Freddie says she wasn’t the least bit frightened at the prospect of it – she just wanted relief from the pain and she wanted to get her life back.

She got it – the surgery went flawlessly and she left the hospital the very next day. “My son still talks about how I walked out of the hospital on my own and got into the car the day after surgery,” she says. And her recovery was as quick and uncomplicated as Dr. Hartl had told her it would be. “I filled a prescription for oxycodone, but I never even had to use it,” she reports. “I didn’t need it, and I’m doing great.”

Thinking back on her initial resistance to surgery, Freddie realizes her fears were unfounded. Today’s new minimally invasive surgical techniques are not nearly as invasive and painful as older methods were. Freddie says if anyone were to ask her advice now about whether or not to have surgery, she’d tell them simply: Go for it.