Like many happy, healthy little girls her age, 10-year-old Abigail (Abbie) Julian from Croton-on-Hudson, New York, enjoyed hanging out with her friends and playing soccer. That was in 2012. Today she is a happy, healthy teenager — with two brain surgeries under her belt. She and her entire family also have a lifetime of appreciation for Dr. Mark Souweidane.

It started with a seizure at school, which earned Abbie an ambulance ride to a nearby emergency room. Doctors diagnosed dehydration and sent her home with her parents with instructions to drink lots of water, especially while engaging in vigorous soccer games and practices. Abbie had a second seizure, then a third, and her anxious parents asked about further testing — shouldn’t she have an MRI? No, said ER doctors at her local hospital, she was merely dehydrated.

By the fourth seizure, Abbie’s parents were insistent and doctors ordered an MRI, which revealed the presence of a benign brain tumor consistent with a desmoplastic infantile astrocytoma.

Her parents, Carleen and Gerard, scoured the Internet for more information about Abbie’s tumor, but the information did nothing to ease their fears; the tumor was benign but the unknowns and the risks always loomed over their heads. Distracted and worried, they tried to keep up a sense of normalcy for the sake of Abbie and her older brother, Alex. But after the kids had gone to sleep, says Carleen, “there were many bouts of crying, hugging, and prayers. It was like our insides were being ripped out, that our hearts had literally been split in two.”

Since surgery was the only treatment for Abbie’s tumor, Carleen and Gerard made an appointment with a neurosurgeon close to home in Westchester County. A few days before the appointment, however, a family friend who worked in medicine told them about Dr. Mark Souweidane and his reputation as an expert in pediatric brain tumors. Dr. Souweidane was just an hour away, at NewYork-Presbyterian and Weill Cornell Medicine in Manhattan.

Carleen and Gerard drove Abbie down to meet with Dr. Souweidane, and they felt an instant connection. Abbie was only 10 at the time, but she remembers trusting him right away and feeling assured to have him as her doctor. Dr. Souweidane’s kindness helped Abbie feel comfortable about the situation, and she says, “I was glad that my treatment would be in his hands.”

Dr. Souweidane and his team became the light the Julian family sorely needed. Abbie’s parents recalled of them, “Although Dr. Souweidane couldn’t promise our Abbie would be fine, he did promise he’d be doing his best, giving his best, sharing his best. We believed, and that helped us in our darkest moments.”

As Abbie’s surgery date drew closer she became terrified by the thought of surgery, but she put her full trust in Dr. Souweidane. She went into the operating room on April 27, 2012. The tumor was fully removed and she went back to being a normal, healthy 10-year-old girl. 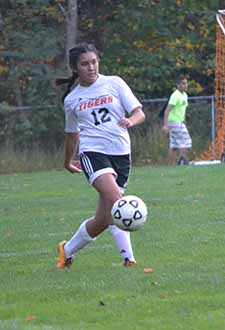 Abbie did require annual follow-up MRIs to ensure there was no additional growth, and at her five-year checkup Dr. Souweidane discovered that another tumor had developed. To make sure the tumor wasn’t spreading into her spine, he ordered an extended MRI; fortunately that scan showed that the tumor wasn’t growing. This allowed Abbie time to finish the school year and attend a summer camp she was looking forward to, and to schedule the second surgery for later in the summer. Her parents were scared during the long wait; this new tumor reignited feelings they hadn’t felt since Abbie’s original diagnosis.

Abbie had her second surgery in August 2017, and this time she wasn’t frightened. She says she already knew what to expect and went through it unfazed; she equated it to falling asleep and simply waking up with a headache.

As they’d done five years earlier, Abbie’s parents tried to stay strong for their children’s sake. As they did at home, they laughed and smiled with Abbie as she was prepped for surgery, but once she rolled behind closed doors into the OR, they broke down and cried together. Yet both times, without fail, their fears abated once Dr. Souweidane walked through the doors with what they call “his calmness and his smile.”

Recovering from surgery was more challenging this time, as the teen desperately missed her soccer team, but she was not able to play for the whole fall season — her first on the high school Varsity team. During her recovery Abbie decided to focus her energy on getting a job, and she began work as a cashier at a local place, Thompson’s Cider Mill. She was in charge of the cider and displaying the apples; she loved working and keeping busy and found it a great alternative to sports.

After Abbie got her first paycheck (a great feeling, she adds!), her mom brought up the Children’s Brain Tumor Project, the research project Dr. Souweidane co-directs to find innovative treatments for brain tumors that don’t have surgical (or any) treatment options. Abbie and her mom both thought it would be a great idea to donate to support to project. As Abbie says, “There are so many other kids that go through similar experiences I went through or even worse, so donating my money gave the opportunity to help those who are ill. It also came to my mind that there is so much research that is still needed to be done but little money for it.”

Even after her two brain surgeries, Abbie is still a regular kid. Once she was able to return to sports, and to her soccer team, she felt like she was back to normal. Today she can usually be found spending time with her friends, shopping with her mom, or finding new music with her dad. Her parents lovingly say, “Family vacations and dinners are nice… she’s a typical teenage girl, and we’re so blessed.” 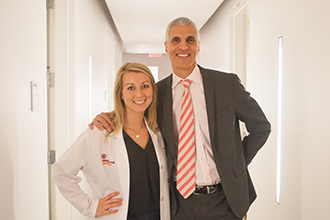 The Julian family has especially kind words for Therese Haussner, who was Dr. Souweidane’s physician assistant at the time. “Therese is an extraordinary person filled with such energy, dedication, love,” says Carleen. “Her enormous heart allowed her to see Abbie’s fear — she spoke to Abbie at each appointment with such care, recognizing that Abbie was a teenager, speaking to her with respect and love. Therese helped us all with her amazingly beautiful smile, kindness, and humor. She answered every question we ever had, she helped post-surgery and during the transition back to school, she laughed with Abbie, she encouraged Abbie to push forward with her dreams, she told Abbie she believed in her. Therese is one of a kind, like Dr. Souweidane — the dynamic duo! We are most grateful for her.”

The family is forever grateful to Dr. Souweidane, not just for his surgical expertise but also for his demeanor. “He took two very frightening times for us and helped us have hope, faith, and trust in everything he did,” says Carleen.  “Dr. Souweidane is our hero and we believed in him from the first second we met him.” To other parents out there facing the devastating diagnosis of a pediatric brain tumor, Carleen says, “know that people are already out there researching and discovering and making our children better.”